The parameters to enable the AXI switches are editable only when both channels of a channel pair are enabled, as shown in the figure below. When you enable the AXI switch, all four of the corresponding controllers should use the same AXI Data Width and Enable Reorder Buffer options. 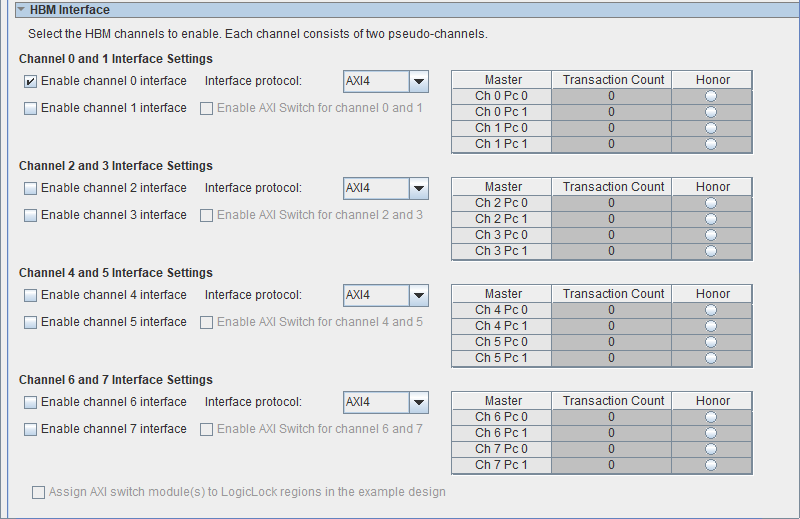 When you enable the AXI switch, you can edit the master’s arbitration scheme parameter table. By default, the switch uses round-robin arbitration (no honor selected, and transaction count 0).

Command Arbitration is needed when multiple masters are competing to access a single slave and require help to efficiently schedule the transactions. The options available help to improve the efficiency of transactions and help to prioritize AXI masters. When AXI masters are not competing for access to a specific slave, all transactions are considered point-to-point and are serviced accordingly. The following arbitration schemes are supported:

Area Overhead Due to Switch

A maximum of twenty AXI clock cycles of round-trip latency across AXI ports when the transactions are point to point. (This refers to the physical latency from the time the command is received to the time read data is available at the user interface, not including command scheduling or wait times in the command queue.) Additional latency when using the switch is based on the command arbitration logic. The AXI master must wait for all the slave responses to return before switching to another slave.