The HBM2 IP provides a non-zero cycle latency backpressure feature that can improve core timing and usability of the HBM2 IP from the AXI Write Address, Read Address and Write Data Interface. You can enable this feature through the parameter editor.

The Controller Backpressure Latency feature allows the user interface to interface to the controller READY signals (address write, address read and write channels) with flexibility. When you enable this feature, the READY signals provided by the HBM2 controller are issued early, according to a value that you specify. 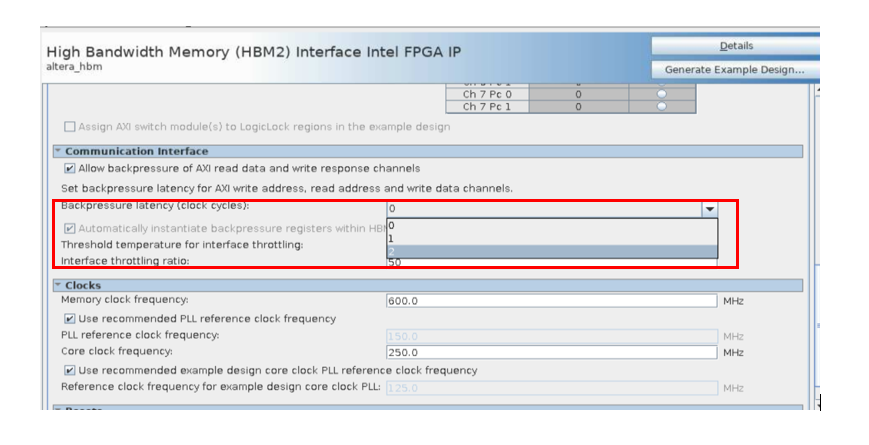 When you choose a non-zero backpressure register value, you can choose to add the register stages in either of the following ways:

As illustrated in the diagram below, with backpressure latency of two clock cycles, READY deasserts in clock cycle T4; however, the HBM2 controller continues to accept input in clock cycles T4 and T5 (input D and E) provided that the corresponding VALID signal is active.

Beginning in the Intel® Quartus® Prime software version 19.4, the HBM2 IP adds the following registers based on the Backpressure latency setting; it is no longer necessary to manually insert the registers.

The following figure illustrates the backpressure register placement in the data path between the user core logic and the AXI soft logic adaptor to facilitate timing closure.

When you enable the read and write response backpressure feature, Write response and Read data interface timing must still be treated at zero cycle latency. The user-interface-issued BREADY and RREADY must be driven HIGH to ensure the controller can provide the outputs when applicable.