AN 958: Board Design Guidelines

Power distribution also impacts system noise. Either a power bus network or power planes can distribute power throughout the PCB. Usually used on two-layer PCBs, the least expensive way to distribute power is a power bus network, which consists of two or more wide metal traces that carry VCC and ground to the devices. The density of the PCB limits the trace widths, which should be as wide as possible. Power buses have significant DC resistance; the last element on the bus may receive VCC power degraded by as much as 0.5 V.

It is recommended to use power planes to distribute power. Used on multi-layer PCBs, power planes consist of two or more metal layers that carry VCC and ground to the devices. Because the power plane covers the full area of the PCB, its DC resistance is very low. The power plane maintains VCC, distributes it equally to all devices, and provides very high current-sink capability, noise protection, and shielding for the logic signals on the PCB. Sharing the same plane between analog and digital power supplies may be risky due to unwanted interaction of these two circuit types.

For fully digital systems without separate analog power and ground planes on the board, adding two new planes to the board may be prohibitively expensive. Instead, you can create partitioned power islands (split plane). Figure 17 shows an example board layout with phase-locked loop (PLL) power islands. 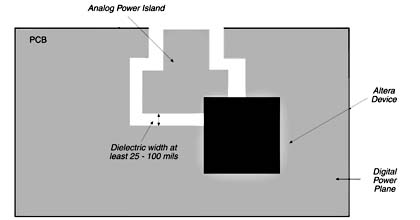