The implements an algorithm that optimizes kernels to maximize performance for data processing.
The datapath of a loop within a single work-item kernel can contain multiple iterations in flight. This behavior is different from a loop within an NDRange kernel in that an NDRange kernel's loop contains multiple work-items in flight. An optimally unrolled loop is a loop iteration that is launched every clock cycle. Launching one loop iteration per clock cycle maximizes pipeline efficiency and yields the best performance. As shown in the figure below, launching one loop per clock cycle allows a kernel to finish faster.
Figure 49. Comparison of the Launch Frequency of a Loop Iteration Between a Non-Pipelined Loop and a Pipelined Loop

In the HTML report, the loop analysis of an optimally unrolled loop will state that the offline compiler has pipelined the loop successfully.

The following logical diagram is a simplified representation of the actual, more complex hardware implementation of kernel nd.

The feedback with the addition operation and the XOR gate is the critical path that limits the offline compiler's ability to achieve the target frequency. The resulting HTML report describes a breakdown, in percentages, of the contributors that make up the critical path.

Loop-Carried Dependencies that Affect the Initiation Interval of a Loop

There are cases where a loop is pipelined but it does not achieve an II value of 1. These cases are usually caused by data dependencies or memory dependencies within a loop.

Data dependency refers to a situation where a loop iteration uses variables that rely on the previous iteration. In this case, a loop can be pipelined, but its II value will be greater than 1. Consider the following example:

For every loop iteration, the value for the product variable in the kernel choose is calculated by multiplying the current value of index i by the value of product from the previous iteration. As a result, a new iteration of the loop cannot launch until the current iteration finishes processing. The figure below shows the logical view of the kernel choose, as it appears in the system viewer. 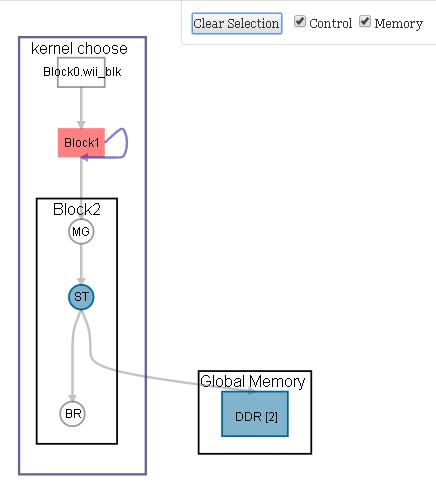 The loop analysis report for the kernel choose indicates that Block1 has an II value of 13. In addition, the details pane reports that the high II value is caused by a data dependency on product, and the largest contributor to the critical path is the integer division operation on line 13.

Figure 56. Information in the Details Pane of the Loop Analysis Report for the Kernel choose 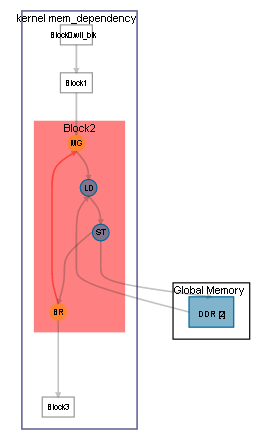 In the loop analysis for the kernel mirror_content, the details pane identifies the source of the memory dependency and the breakdown, in percentages, of the contributors to the critical path for Block2.

Figure 58. Details Pane of the Loop Analysis for the Kernel mirror_content 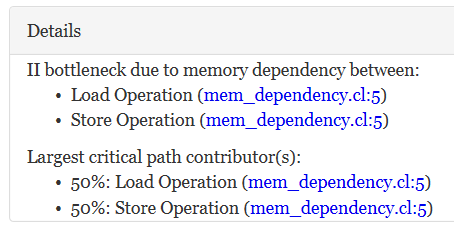