Enter parameters of your own user capacitors in the Library tab of the PDN Tool. In this example, 680uF and 1000uF Panasonic POSCAP Tantalum-Polymer Capacitors with an ESR of 0.005 were used. 0.005 is entered for User5 and User6 of the Bulk Cap ESR(R) column. On the System Decap tab 680 and 1000 is entered for User5 and User6. In this case the higher 680uF and 1000uF may also help to reduce the total capacitor count. The PDN Tool reports that using ultra-low ESR capacitors reduces bulk capacitor count of the VCC, VCCT_GXB, and VCCR_GXB supplies as shown below. 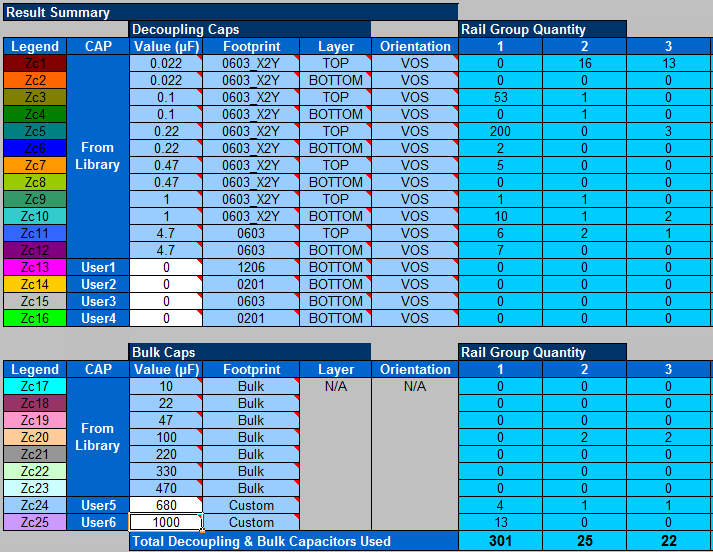 The VCCT_GXB, and VCCR_GXB supplies now require 25 and 22 capacitors respectively. VCC bulk capacitors are reduced from 23 to 17 when using ultra-low ESR bulk capacitors. However the target impedance is still not met at high frequencies.

The PCB, stackup, layer allocation and capacitor use and placement are now highly optimized. Further evaluation of the supply rail layers can still be done. The VCC supply is placed on Layer 9, but VCCT_GXB, and VCCR_GXB are placed on Layer 4. Layer 4 is more optimal because it has less vertical inductance.