Total thermal power includes only the thermal component for the I/O section and does not include the external power dissipation, such as from voltage-referenced termination resistors.

The static power (PSTATIC) is the thermal power dissipated on chip, independent of user clocks. PSTATIC includes the leakage power from all FPGA functional blocks, except for I/O DC bias power and transceiver DC bias power, which are accounted for in the I/O and transceiver sections.

PSTATIC is the only thermal power component which varies with junction temperature, selected device, and power characteristics (process). 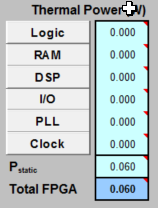