You can export a core block with unique characteristics that you want to retain, and then replicate that functionality or physical implementation in other projects. In the following figure, a Developer reuses the red-colored partition in the floorplan in another project shown in green in the floorplan on the right. 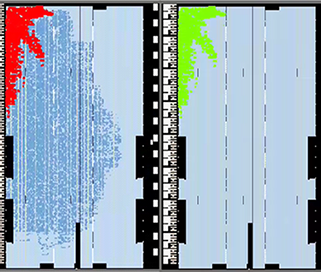 In a typical root partition reuse example, a Developer defines a root partition that includes periphery and core resources that are appropriate for reuse in other projects. An example of this scenario is reuse of the periphery for a development kit that can be reused by multiple Developers and projects.

You can reuse the root partition with multiple other boards. The root partition Developer creates a design that meets expected design requirements with all the required resources, while also reserving a region (the reserved core) for Consumer development. The Developer then exports the root partition as a .qdb file and passes the .qdb to the Consumers of the partition.