This article describes the concept of vHost User non-uniform memory access (NUMA) awareness, how it can be tested, and the benefits the feature brings to Open vSwitch (OVS) with the Data Plane Development Kit (DPDK). This article was written with users of OVS in mind who wish to know more about the feature. It may also be beneficial to users who are configuring a multi-socket virtualized OVS DPDK setup that uses vHost User ports as the guest access method for virtual machines (VMs) and want to configure and verify the optimal setup.

vHost User NUMA awareness was introduced in DPDK v2.2 to address a limitation in the DPDK, surrounding the inefficient allocation of vHost memory in setups with multiple NUMA nodes. In order to understand the limitation the feature addresses, one must first understand the three different types of memory that vHost User devices comprise (see Figure 1).

For an optimized data path, all three memory types should be allocated on the same node. However this wasn’t possible before DPDK v2.2, because the device-tracking structures for each device (managed by DPDK) had to all come from the same node, even if the devices themselves were attached to VMs on different nodes. This created a scenario where device tracking memory and guest memory are on different nodes, introducing additional Intel® QuickPath Interconnect (QPI) traffic and a potential performance issue (see Figure 2). 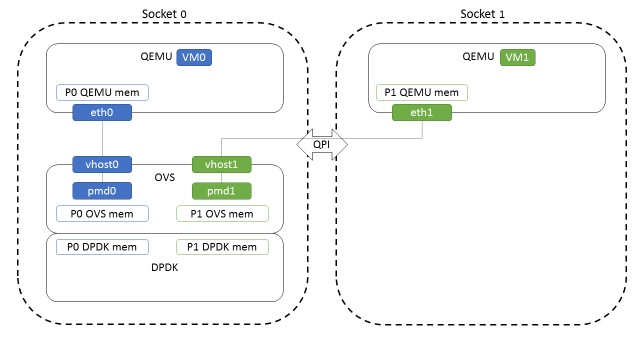 One last type of memory needs to be correctly allocated, which is the back-end buffers, or ‘mbufs’. These are allocated by OVS and in order to ensure an efficient data path, they must also be allocated from the same node as the guest memory and device tracking memory. This is now achieved by the DPDK sending the NUMA node information of the guest to OVS, and then OVS allocating memory for these buffers on the correct node. Before the addition of this feature, these buffers were always allocated on the node of the DPDK master lcore, which wasn’t always the same node that the vHost User device was on.

The final piece of the puzzle involves the placement of OVS poll mode driver (PMD) threads. PMD threads are the threads that do the heavy lifting in OVS and perform tasks such as continuous polling of input ports for packets, classifying packets once received, and executing actions on the packets once they are classified. Before this feature was introduced in OVS, the PMD threads servicing vHost User ports had to all be pinned to cores on the same NUMA node, that node being that of the DPDK master lcore. However, now PMD threads can be placed on the same node as the device’s memory buffers, guest memory, and device tracking memory. Figure 3 depicts this optimal memory profile for vHost User devices in OVS with the DPDK in a multiple NUMA node setup.

The setup used in this article consists of the following hardware and software components:

Before installing DPDK and OVS, ensure that the NUMA libraries are installed on the system. For example, to install these on a Fedora OS, use:

Ensure the DPDK is built with the following configuration option enabled:

Now OVS can be built and linked with the DPDK.

Before launching the VMs, check the PMD distribution with the following command:

Because the VMs are not yet launched and information about the guest memory is not yet known, the PMD threads associated with the vHost User ports will be located on the same NUMA node:

Now launch two VMs, VM0 on node 0 and VM1 on node 1. To ensure the intended placement of the VM cores, use the ‘taskset’ command. For example:

Check the logs of the VMs. VM1 will print a log similar to the following:

Another way to verify successful relocation is to check the PMD distribution again using the ‘pmd-rxq-show’ utility:

‘dpdkvhostuser1’ is now serviced by a thread on NUMA node 1, which is the node on which the VM it is attached to is running.

In this article we described and showed how DPDK and OVS dynamically reallocates memory and relocates threads according to how the test environment is set up. We have demonstrated the different ways you can verify the correct operation of the vHost User NUMA awareness feature.

For more details on the DPDK vHost library, refer to the DPDK documentation.

For more information on configuring vHost User in Open vSwitch, refer to INSTALL.DPDK.rst.

Ciara Loftus is a network software engineer with Intel. Her work is primarily focused on accelerated software switching solutions in user space running on Intel® architecture. Her contributions to OVS with DPDK include the addition of vHost Cuse and vHost User ports and NUMA-aware vHost User.