This API is generic, as it is agnostic of the underlying hardware, software, or mixed HW/SW implementation. It is exposed as an extension for the DPDK ethdev API, similar to the flow API. A typical DPDK function call sequence is included to demonstrate implementation.

The TM API allows users to select strict priority (SP) and weighted fair queuing (WFQ) for the hierarchical nodes subject to specific implementation support being available. The SP and WFQ algorithms are available at the level of each node of the scheduling hierarchy, regardless of the node level/position in the tree. The SP algorithm is used to schedule between sibling nodes with different priority, while WFQ is used to schedule between groups of siblings that have the same priority.

Example: As shown in Figure 1, the root node (node 0) has three child nodes with different priorities. Hence, the root node will schedule the child nodes using the SP algorithm based on their priority, with zero (0) as the highest priority. Node 1 has three child nodes with IDs 11, 12, and 13, and all the child nodes have the same priority (that is, priority 0). Thus, they will be scheduled using the WFQ mechanism by node 1. The WFQ weight of a given child node is relative to the sum of the weights of all its sibling nodes that have the same priority, with one (1) as the lowest weight. 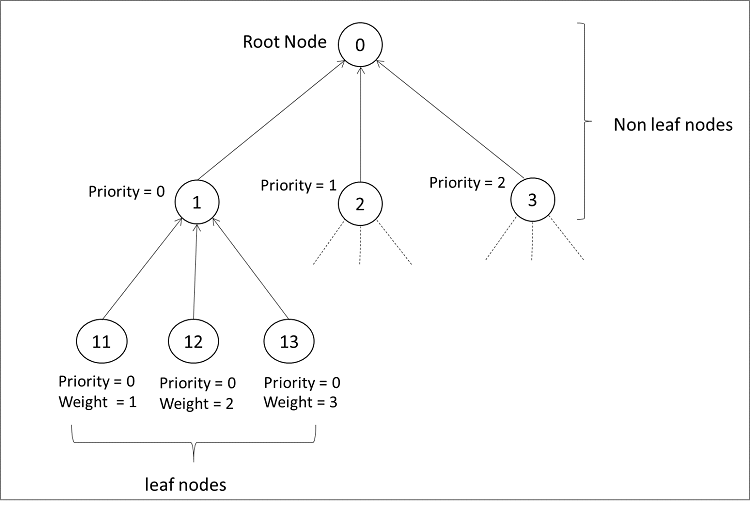 As shown in Figure 1, each non-leaf node has multiple inputs (its child nodes) and single output (which is input to its parent node). Thus, non-leaf nodes arbitrate their inputs using scheduling algorithms (for example, SP, WFQ, and so on) to schedule input packets to its output while observing the shaping (rate limiting) constraints.

The congestion management algorithms that can be selected through the API are Tail Drop, Head Drop and Weighted Random Early Detection (WRED). They are made available for every leaf node in the hierarchy, subject to the specific implementation supporting them.

During congestion, the Tail Drop algorithm drops the new packet while leaving the queue unmodified, as opposed to the Head Drop algorithm, which drops the packet at the head of the queue (the oldest packet waiting in the queue).

Steps to Set Up the Hierarchy

Each leaf node sits on top of a scheduling queue of the current Ethernet port. Therefore, the leaf nodes have predefined IDs in the range of 0... (N–1), where N is the number of scheduling queues of the current Ethernet port. The non-leaf nodes have their IDs generated by the application outside of the above range, which is reserved for leaf nodes. The unique ID that is assigned to each node when the node is created is further used to update the node configuration or to connect child nodes to it.

The first node that is added to the hierarchy becomes the root node (node 0, Figure 1), and all the nodes that are subsequently added have to be added as descendants of the root node. The parent of the root node has to be specified as RTE_TM_NODE_ID_NULL, and there can only be one node with this parent ID (that is, the root node).

During this phase, some limited checks on the hierarchy specification are conducted, usually limited in scope to the current node, its parent node, and its sibling nodes. At this time, since the hierarchy is not fully defined, there is typically no real action performed by the underlying implementation.

The hierarchy commit API is called during the port initialization phase (before the Ethernet port is started) to freeze the start-up hierarchy. This function typically performs the following steps:

* It validates the start-up hierarchy that was previously defined for the current port through successive node add API invocations.

* Assuming successful validation, it performs all the necessary implementation-specific operations to install the specified hierarchy on the current port, with immediate effect once the port is started.

The TM API provides support for on-the-fly changes to the scheduling hierarchy; thus, operations such as node add/delete, node suspend/resume, parent node update, and so on can be invoked after the Ethernet port has been started, subject to the specific implementation supporting them. The set of dynamic updates supported by the implementation is advertised through the port capability set.

Freeze and Validate the Startup Hierarchy

This article discusses the DPDK Traffic Management API that provides an abstraction layer for HW-based, SW-based, or mixed HW/SW-based traffic management implementations. The API is exposed as part of the DPDK ethdev framework. Furthermore, API usage is demonstrated by building and enabling the hierarchical scheduler on the Ethernet device.

Details on Traffic Management APIs can be found at the following links:

Jasvinder Singh is a Network Software Engineer with Intel. His work is primarily focused on development of data plane functions, libraries and drivers for DPDK.

Wenzhuo Lu is a Software Engineer for DPDK at Intel. He is a DPDK contributor and maintainer on dpdk.org.

Cristian Dumitrescu is a Software Architect for Data Plane at Intel. He is a DPDK contributor and maintainer on dpdk.org.