This article describes how the Data Plane Development Kit (DPDK) packet capture framework is used for capturing packets on the DPDK ports. It is written with users of DPDK in mind who want to know more about the feature and for those who want to monitor traffic on DPDK-controlled devices.

The librte_pdump library provides the APIs required to allow users to initialize the packet capture framework and to enable or disable packet capture. The library works on a client/server model and its usage is recommended for debugging purposes.

The DPDK ‘testpmd’ application is modified to initialize the packet capture framework and act as a server, and the dpdk-pdump tool acts as a client. To view Rx or Tx packets of testpmd, the application should be launched first, and then the dpdk-pdump tool. Packets from the testpmd will be sent to the tool, which then sends them on to the pcap pmd device and that device writes them to the pcap file or to an external interface depending on the command-line option used.

Figure 1 shows the usage of the dpdk-pdump tool for packet capturing on the DPDK port. 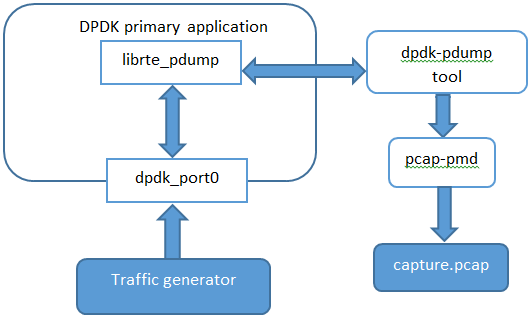 The following steps demonstrate how to run the dpdk-pdump tool to capture Rx side packets of dpdk_port0 and inspect them using tcpdump.

In this article we described the DPDK pdump library and the pdump tool and how they can be used to capture traffic passing on DPDK ports.

More details on librte_pdump library and dpdk-pdump tool can be found at following links.

The DPDK Programmer's Guide has a section dedicated to the librte_pdump library, which contains more information about how it works.

The Sample Applications Users Guide has a section dedicated to the dpdk-pdump application.

The article DPDK Pdump in Open vSwitch* with DPDK describes use of dpdk-pdump for DPDK devices in OvS-DPDK configurations.

If you have questions regarding usage, feel free to follow up with an email query at users@dpdk.org.

Reshma Pattan is a Network Software Engineer at Intel Corporation. Her work primarily focuses on data plane library development for DPDK. Her contributions to DPDK include the addition of the packet reorder library, the packet ordering sample application, the pdump library, and the dpdk-pdump tool.