This article describes the concept of DPDK pdump, how it can be tested, and the benefits the feature brings to Open vSwitch* (OVS) with the Data Plane Development Kit (DPDK). This article was written with users of OVS in mind who want to know more about the feature and for those who want to monitor traffic on DPDK devices in their OVS DPDK setup.

The pdump library was introduced in DPDK v16.07 to allow users of DPDK-based applications to monitor and capture the traffic passing on DPDK devices.

The pdump library uses a client-server model. The DPDK-based application (OVS DPDK) acts as the server and is responsible for initializing the pdump framework. OVS DPDK will initialize the pdump framework on startup if the 'pmd_pcap' and 'pdump' DPDK configuration options are set in DPDK when linking with OVS. This process is described in the installation documentation as well as in the Configuration Steps section of this article.

A separate, secondary DPDK process must be launched that acts as the client and is responsible for enabling and disabling the packet capture. An example of an existing application that can be used as the client is the dpdk-pdump application, which can be found in the 'app' directory of the DPDK. Further details of its usage can be found in the Configuration Steps section and in the DPDK documentation.

A performance decrease is expected when a monitoring application like dpdk-pdump is used. 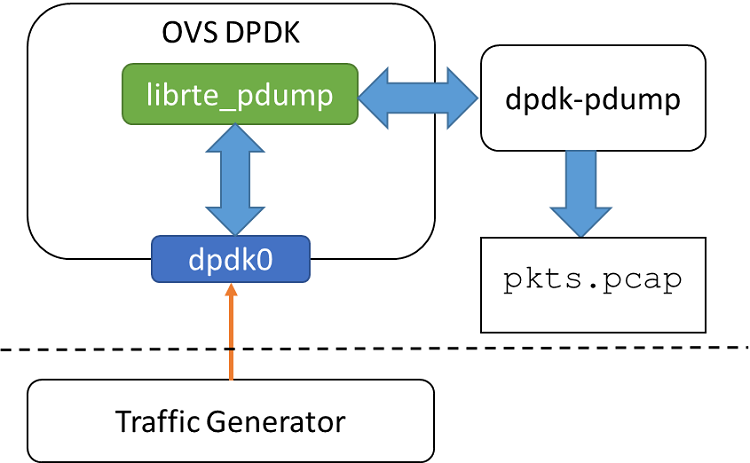 Figure 1: Open vSwitch* with the Data Plane Development Kit configuration with one physical port and the librte_pdump library initialized. The dpdk-pdump DPDK sample application is being used to capture traffic passing on 'dpdk0' and saving the information in 'pkts.pcap'.

The setup used in this article consists of the following hardware and software components:

In this article we described the DPDK pdump library and how it can be leveraged in OVS in order to capture traffic passing on DPDK ports.

Ciara Loftus is a network software engineer with Intel. Her work is primarily focused on accelerated software switching solutions in user space running on Intel® architecture. Her contributions to OVS with DPDK include the addition of vHost User ports, NUMA-aware vHost User and DPDK v16.07 support.