10.2. Component Gets Poor Quality of Results

While there are many reasons why your design achieves a poor quality of results (QoR), bad memory configurations are often an important factor. Review the Function Memory Viewer report in the High Level Design Reports, and look for stallable arbitration nodes and unexpected RAM utilization.

The information in this section describes some common sources of stallable arbitration nodes or excess RAM utilization.

By default, the Intel® HLS Compiler Pro Edition tries to optimize your component for the best throughput by trying to maximize the maximum operating frequency (fMAX).

A way to reduce area consumption is to relax the fMAX requirements by setting a target fMAX value with the --clock i++ command option or the hls_scheduler_target_fmax_mhz component attribute. The HLS compiler can often achieve a higher fMAX than you specify, so when you set a target fMAX to a lower value than you need, your design might still achieve an acceptable fMAX value, and a design that consumes less area.

To learn more about the behavior of fMAX target value control see the following tutorial: <quartus_installdir>/hls/examples/tutorials/best_practices/set_component_target_fmax

Loops Do Not Achieve II=1

If you specify a target fMAX , the compiler might conservatively increase II in order to achieve your target fMAX .

If you access parts of an array in parallel (either a single- or multidimensional array), you might need to configure the memory bank selection bits.

In some cases, if you try to access different arrays of struct variables with a conditional operator, the Intel® HLS Compiler Pro Edition merges the arrays into the same RAM block. You might see stallable arbitration in the Function Memory Viewer because there are not enough Load/Store site on the memory system.

Your design might consume more RAM blocks than you expect, especially if you store many array variables in large registers.

You can use the hls_use_stall_enable_clusters component attribute to prevent the compiler from inserting stall-free cluster exit FIFOs.

The Area Analysis of System report in the high-level design report (report.html) can help find this issue. 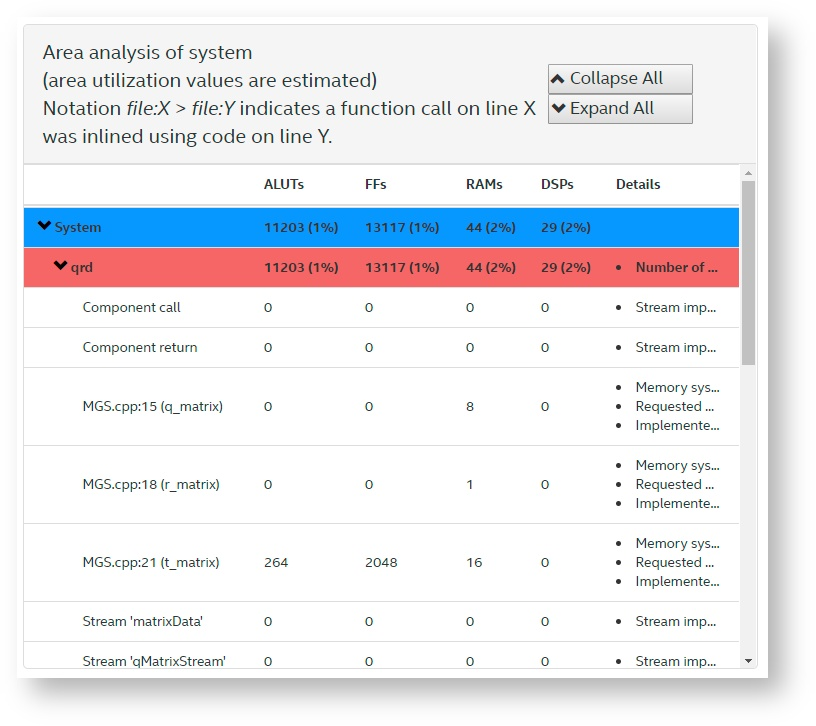 If you look further down the report, you might see that many RAM blocks are consumed by Cluster logic or State variable. You might also see that some of your array values that you intended to be stored in registers were instead stored in large numbers of RAM blocks.

Notice the number of RAM blocks that are consumed by Cluster Logic and State.

In some cases, you can reduce this RAM block usage by with the following techniques:

Component with a System of Tasks Hangs or has Poor Throughput

If your component contains a system of tasks, you might need to add launch/collect capacity.

For details, refer to Balancing Capacity in a System of Tasks.