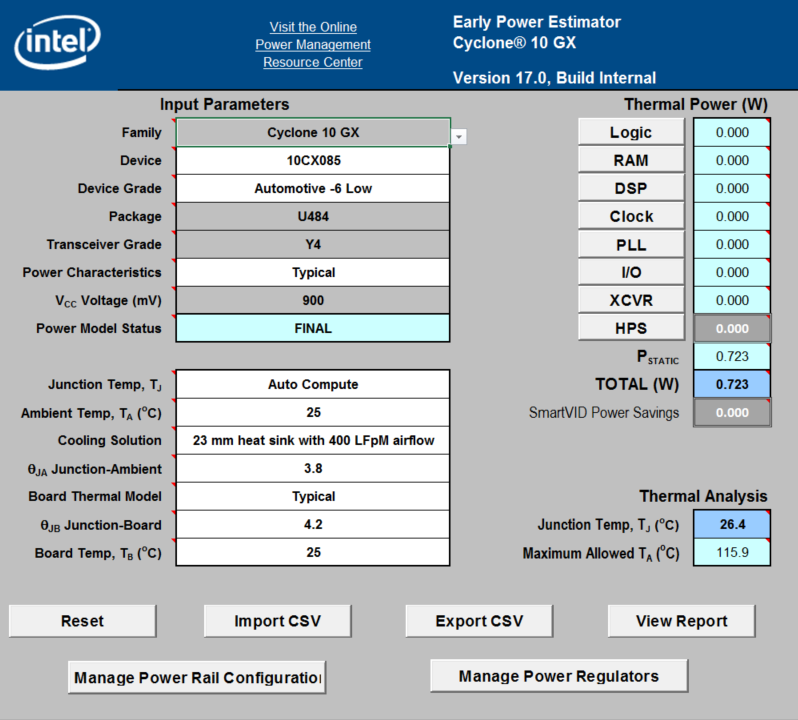 The required parameters depend on whether the junction temperature is manually entered or auto computed.

The static power (PSTATIC) is the thermal power dissipated on the chip, independent of design activity. PSTATIC includes the static power from all FPGA functional blocks, except for I/O DC bias power and transceiver DC bias power, which are included in the standby power of the I/O and XCVR worksheets, respectively. PSTATIC is the only thermal power component that varies with junction temperature and power characteristics (process). PSTATIC is also the only thermal power component that varies significantly with selected device.

Note: If any thermal power value is highlighted in red, it indicates an error in the design specification. Review the relevant worksheet for errors or utilization values exceeding 100%. Correct any errors to obtain reliable power and temperature estimates.

Not Using a Heatsink

Figure 9. Thermal Model in the EPE Spreadsheet without a Heat Sink

The following equation shows the total power calculated based on the total θJA value, ambient, and junction temperatures.

Figure 11. Thermal Model for the EPE Spreadsheet with a Heat Sink

Based on the device, package, airflow, and heat sink solution selected in the Input Parameters section, the EPE spreadsheet determines the θJA.

If you use a low, medium, or high profile heat sink, select the airflow from the values of Still Air and air flow rates of 100 lfm (0.5 m/s), 200 lfm (1.0 m/s), and 400 lfm (2.0 m/s). If you use a custom cooling solution, enter the custom θJA value. You must incorporate the airflow and junction to case resistance into the custom θJA value. You can obtain these values from the heat sink manufacturer.

The total power is calculated based on the θJA and θJBvalues, and ambient board and junction temperatures with the following equation.