The Android system has roughly a billion users, with almost a million applications from the Play Store downloaded and used daily. Android users equate their User Experience (UX) with their application (app) experience. Measuring UX via running Play Store apps is subjective, non-repeatable and difficult to analyze. Further, most magazine benchmarks don’t stress critical paths representing real application behavior; optimizing for these benchmarks neither improves UX nor delights app users. Many Android benchmarks that have been used since Cupcake (Android 1.0) have become obsolete due to improvements in Android compilers and runtimes.

This paper discusses the Intel-developed Java* Application Component Workload (ACW) for Android*. ACW was developed to bridge the gap between magazine benchmarks and more sophisticated workloads that model real app behavior, as well as to provide a guide to robust optimizations that perceivably improve UX. The workload has been analyzed to help app developers write optimal Java code for Android (for more information, see https://software.intel.com/content/www/us/en/develop/articles/how-to-optimize-java-code-in-android-marshmallow.html). OEMs, customers and system engineers can use ACW to compare Android software and System-on-a-Chip (SoC) capabilities

The workload consists of a set of computational kernels from often-used applications. Kernels are groups of tests in the areas of gaming, artificial intelligence, security, parsing HTML, PDF document parsing and encryption, image processing and compression/decompression. ACW stresses the Android Java Runtime (ART) compiler and runtime, measuring the impact of compiled code and its runtime overhead while executing the application program. VM engineers and performance analysts can use the workload to explore ways to improve ART code generation, object allocation and runtime optimization, as well as suggest ways to improve the micro-architecture of upcoming SoCs.

ACW includes a set of tests designed to measure the difference between 32- and 64-bit code, but the primary focus is on UX. ACW can be run from both a Graphical User Interface (GUI) and the command line (using adb shell). The workload can mix and match which kernels are run and measured. The use cases are of fixed duration and they report a throughput-based score. The final score (operations/second) is the geometric mean of the throughput scores of each kernel.

How to run ACW in the Android mobile environment (user mode)

On the Android platform, ACW is provided as an Android application package (apk). After installation, clicking on the JACWfA icon (see icon in Figure 1) launches the workload and displays a UI with the Start option at the center of the screen. Additional navigation is available at the bottom of the UI using two tabs: TEST and RESULTS. By default, the TEST tab will be displayed. Click the Start button to run the workload using the default profile settings. By default, all tests (tests are the kernels described above) will be selected, but the user may deselect any particular test or tests. In the top right corner, there is a Settings icon which allows users to configure Threads, Suite and Accuracy for each run. 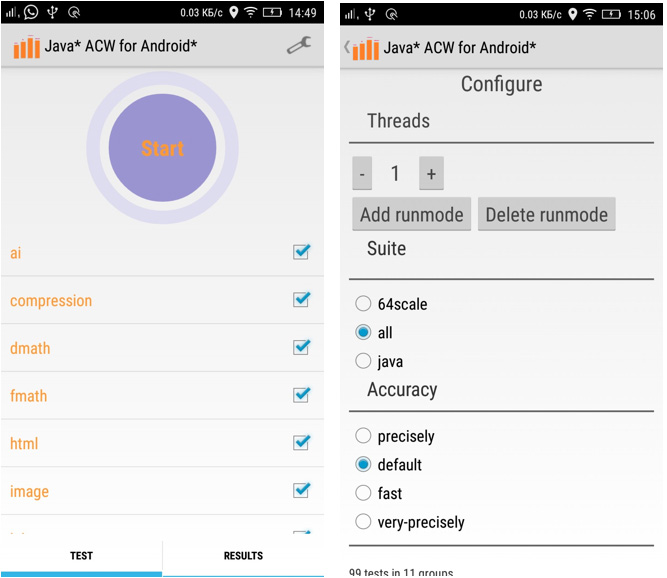 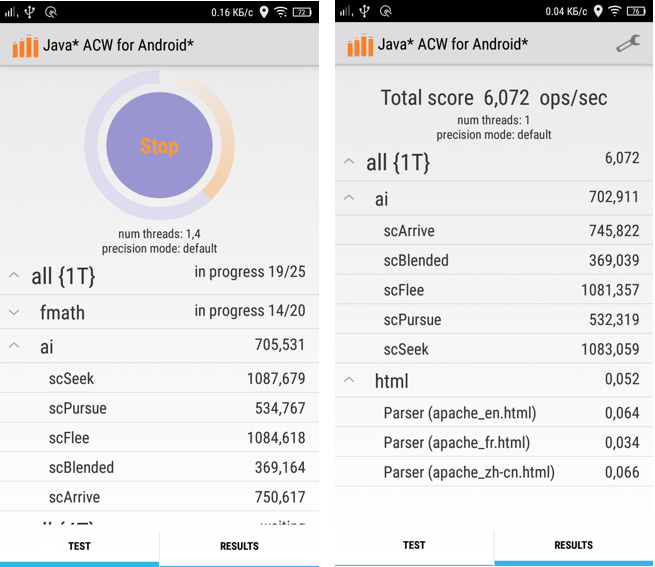 The workload can also be run as an Android application from the command line via adb. For example:

The Android version of the workload is designed to mimic the characteristics exhibited by real applications. Most Java applications in Android are multi-threaded, so the workload has support for as many threads as there are available cores on the device, though there is no direct communication between these threads.

ACW has three pre-configured test set options: Java, 64scale and All. Java mode runs only tests which closely mimic real application behavior. 64scale mode runs computational tests for the purpose of comparing 32- and 64-bit execution. All mode runs every test in the workload. Additionally, one can select how long tests should run via the Accuracy modes. They recognize that the longer a test runs, the more accurate will be the result. The four predefined Accuracy modes are: very-precisely (longest run), precisely, default and fast (shortest run). The default Accuracy is a balance between test result stability and time to run, and should take 20-40 minutes to complete on the default test set configuration. To modify accuracy settings the corresponding XML configuration files should be updated. When the configuration is complete, the user can return to the home UI by clicking on the icon on the top left corner or by using the back option at the bottom of the screen.

Click the START button to run the workload (Figure 3). The progress wheel (as on Figure 2) shows the run status. 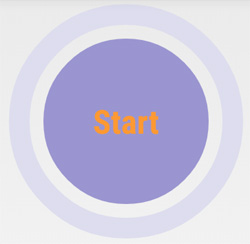 The UI displays which tests have completed, the one currently in progress and which are yet to run. The final score is displayed at the top of the RESULTS tab. Additionally, individual test and subtest scores are displayed on the screen and are available from logcat messages. Note that ACW can be run in a Developer mode which allows even easier customization and debuggability. More information on Developer mode can found on the web at How to run ACW in Developer mode.

ACW includes over 80 tests grouped into kernels (see the table below) associated with different application areas. Every kernel includes a number of tests that implement realistic Android application scenarios using standard Java libraries. Some tests, such as MATH and SORT, implement well-known algorithms.

ACW produces scores for individual kernels and their subtests and an overall performance score. The overall score is measured in operations per second (ops/sec). Here are the formulas to calculate scores:

The Design of ACW for Android

ACW uses the open source MTTest modular framework, which was specially developed for this workload. It can be configured to run under both ART and the Java Virtual Machine (JVM) on Android as well as Linux- and Windows-based PC environments using both 32- and 64-bit operating systems.

The framework is designed to be easily extended for new performance testing cases. Runner, Summary and Reporter modules can be easily updated to support new functionality, such as reporting results in XML file format. 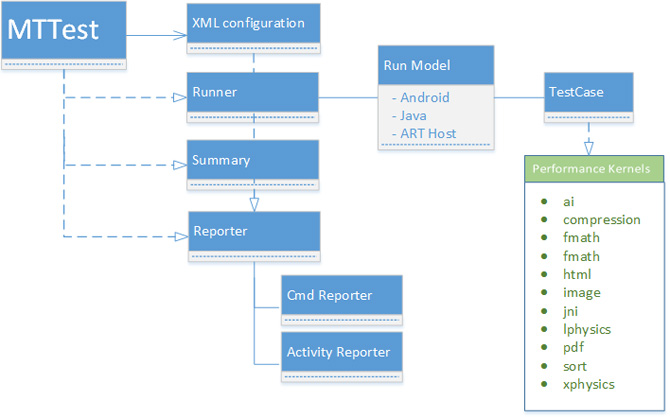 Standard workflow shown in the architecture diagram (Figure 4) is:

Test Ramp-Up is used to allow JVMs with Just-In-Time (JIT) compilers to compile hot code so that we can measure pure JVM performance. That is, we wait long enough to trigger JIT compiles so the main test is run using compiled code, not the interpreter. Ramp-up and ramp-down phases are also needed for multi-threaded runs in order to ensure that all test threads are running while some of them are starting to ramp-up or others are finishing measurement. The Measurement phase is used to compute results based on test duration and number of operations executed.

In all tests, iteration() executes in a loop until the time spent reaches the configured value of stageDuration, which limits test run time (iteration time):

Ramp-up/down times are defined by two types of configuration files. The first is the Test configuration file (<ACW_DIR>/assets/testsets/masterset.xml) which includes a list of XML files which describe the tests to be run and their parameters. In the example below, pdf.xml describes the Pdf kernel, subtest names, number of repetitions and input file names.

With a default test set configuration, the workload runs certain tests several times and compares the result against different type/size golden files (<ACW dir>/assets/goldens). This is done to emulate system load variation as on real end user systems. As a result, the default number of test runs is more than the number of performance tests.

The second type of XML file is a setup configuration file (<ACW dir>/assets/configs) that limits test run times. There are four predefined XML configuration files: short, medium, long and very_long. By default, medium.xml is used to limit workload run time up to six seconds, ramp-up to two seconds and ramp-down to one second:

ACW runs multiple threads (up to the number of CPU cores) as part of its default settings. Real Android applications in Java are often multi-threaded, although interaction between multiple Java threads is a new area of focus among Android performance analysts and is not present in ACW. From a performance investigation standpoint, we have focused on the single-threaded case, since app threads typically do not interact except during synchronization within the ART framework libraries.

ACW opens the door for Profile Guided Optimizations (PGO) done by most Java optimizing compilers e.g. de-virtualization, call site specialization, direct call conversion and method inlining in ART. We have also identified opportunities for loop transformations such as loop fusion and unrolling, and null check elimination and array bound check elimination within loops. Further opportunities include use of intrinsics for a few methods from java.lang.String and java.util.math, and native inlining for methods that call into ART’s native String implementation.

ACW has been open sourced at https://github.com/android-workloads/JACWfA/ as part of Intel’s contribution to improving the way User Experience performance is measured on Android. After optimizing away several synthetic benchmarks such as CF-Bench and Quadrant, Intel’s team took a step forward by using Icy Rocks* (see the paper for details https://software.intel.com/content/www/us/en/develop/articles/icy-rocks-workload-a-real-workload-for-the-android-platform.html) to represent a physics gaming workload. ACW is a further step forward in that it represents a wider set of application use-cases in the form of an Android workload. Intel’s objective is to drive cross-platform ART compiler and runtime performance improvements on the latest and greatest versions of Android in order to improve user experience.

The source code can be downloaded at https://github.com/android-workloads/JACWfA/. Release 1.1 of the apk is available in the /bin folder.