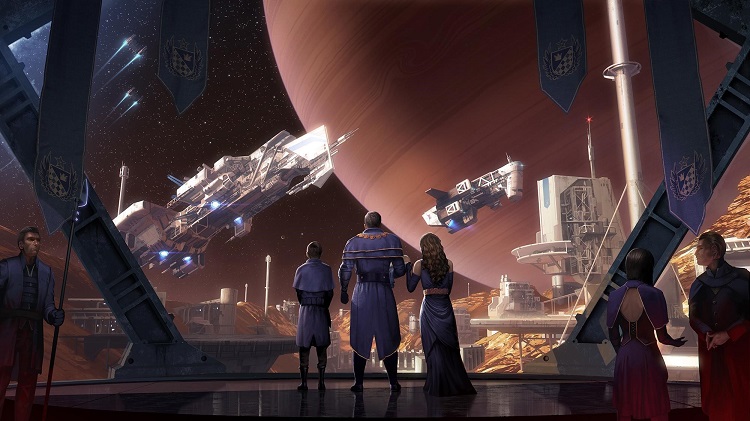 In concept art, the shorter the time between an abstract idea and a concrete visual, the better. This applies to any industry where concept art is involved, but speed is especially important in the fast-paced development pipelines of the video game industry. Using a digital illustration I made for the indie game Star Dynasties*, I'll outline the steps of conceptualizing, gathering reference, sketching, and finalizing, with a focus on efficiency and speed.

The accompanying video shows some specific ways to use 3D elements, photo textures, and Photoshop* tools. Every artist has their own toolkit of techniques that best fits their style or the needs of a particular project. I hope this walkthrough provides some ideas that you can add to your own toolkit.

The first step in creating this illustration for Star Dynasties was to determine the purpose of the image. What does the image need to accomplish? In this case, it's the main splash art for the game, and is probably the first visual that a potential player will see. It should therefore represent the mood and perhaps genre of the game, drawing in the types of gamers that would be interested. Mood and genre can be established through color, framing/composition, subject matter, and style. In essence, it's telling a story with an image, which is what most concept art and illustration is about.

According to Star Dynasties creator Glen Pawley, the game is "a character simulation game set in a dark age future, where you play as the leader of a faction of space colonies through multiple generations of your dynasty. Your goal is to ensure that your house survives and grows in influence." It's a strategy game about quasi-medieval politics and personal relationships rather than military strategy, so it needs to have cover art that feels different from a first-person shooter. After the purpose of the image is established, it's time to start collecting some reference.

Collecting a robust library of reference can be very helpful at the start of a project, even before starting on sketches. It helps to establish an understanding between anyone involved with the project, whether it's artist and client, or art team and art director. Reference saves a lot of time and effort, not only as a guide for what to do, but also as a guide for what not to do. Collecting reference from games in the same genre can be a way to expand the creative horizons of your game, or to avoid visuals that have already been done (or overdone). The more that the mood, style, and content can be detailed before pencil hits paper, the less back-and-forth there will be between artist, client, art director, and so on.

Sometimes a small collection of images will suffice, but it may be useful to develop a more detailed and organized style guide if it's a team project involving multiple artists. However, more complete, comprehensive style guides are usually only made after some of the primary art on a project has been created. Besides benefiting the initial ideation, reference is of course helpful throughout the digital painting process, especially for realistic or semi-realistic styles. Reference is easy to obtain through web searches, with tools like the Handy art reference tool, or by making faces at yourself in the mirror. It's all about getting the best results in the quickest way, so easily accessible reference should always be taken advantage of.

After some initial ideas, goals, and reference have been established, the next step is thumbnail sketches. Sometimes an important illustration like cover art can have dozens of thumbnails and roughs completed before a direction for the final image is selected. In this case, there were only a handful, since the basic direction was determined beforehand: A ruler or royal family is in the foreground, with a space colony in the background, inviting the viewer to imagine themselves in the role of the character. 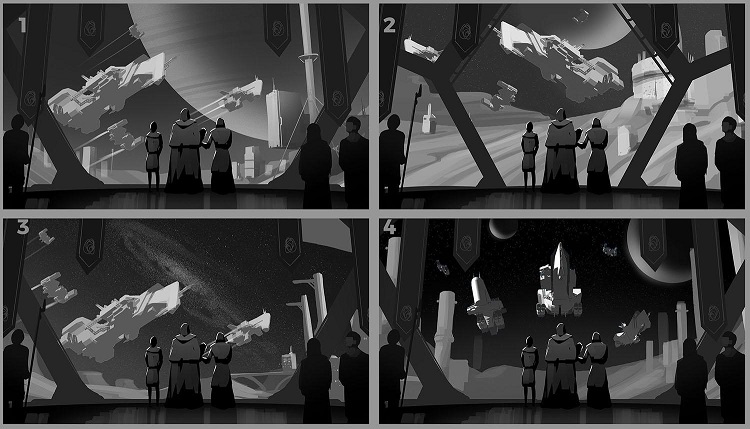 These initial rough sketches don't depict action or violence, but instead show or hint at the following key elements:

You may notice the use of 3D elements in these roughs. Using 3D (in this case, SketchUp*) in the thumbnail process can add extra time if all that's needed is a rough scribble. However, the basic spaceship models in these roughs had already been made for previous Star Dynasties illustrations, so it was faster to position them and take some screenshots than it was to sketch them out. Another potential reason for using 3D in the thumbnail process is that it can provide an organic way to explore perspective and composition options.

Zooming and panning in 3D space can open up new opportunities for interesting compositions. Even a very basic blocked-out version of a room, building, or other object can serve this purpose. For example, a castle could be as simple as a handful of 3D boxes and cylinders and still be used to explore potential compositions. Finding the right composition is a vital part of the thumbnail process. Not only does the right composition create a compelling image to look at, it also helps convey the story, idea, and mood.

In the rough images in Figure 2 above, #1 (on the top left) ended up being the final choice for the illustration. There are some problems with the other roughs:

Here is how #1 functions compositionally: The symmetry first draws the eye to the characters at the center, and then to what they're looking at. The diagonal movement of the ships and the vertical direction of the banners help to lead the eye around the rest of the image, landing on secondary points of interest like the guard on the left, the nobles talking (or plotting?) on the right, and the background elements that depict the setting.

The final part of the process is bringing the image up to the level of detail needed. Some concepts can be rough sketches or rough color speed paintings, but as an illustration, this image needs to be taken to a state of polish. First, I fleshed out some of the 3D scene from the thumbnails using SketchUp. Some concept artists use 3D almost exclusively; some use nothing. A few Photoshop brushes and thirty minutes can generally create a more realized scene or character than thirty minutes in a 3D program. But if high levels of detail and/or realism are required, for example in cinematic key art, 3D renders can become very useful, sometimes even a necessity. In this illustration, SketchUp was used mainly to establish the perspective, and as a guide for the digital painting.

Sometimes I'll paint right on top of a 3D render, using some of the Photoshop coloring techniques that I go over in the video. But that usually involves a finished model from a 3D artist rather than these boxy blocked-out SketchUp creations of my own. SketchUp isn't the most advanced 3D tool out there, and its main use is for man-made shapes, not organic shapes. But it's free (or relatively cheap for the pro version) and intuitive, making it a favorable choice for artists who are inexperienced in 3D, and/or do not use 3D enough to justify the hefty price tags of other programs. 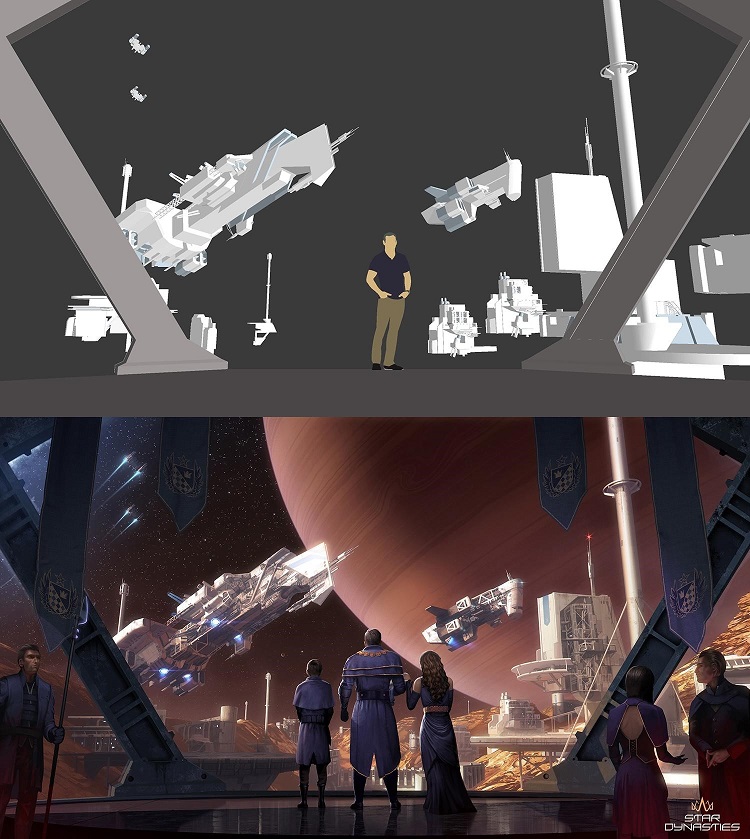 After fleshing out the 3D scene and updating the thumbnail rough based on the new screenshot, the next step is to add color. Keeping the major elements like figures, support beams, floor, buildings, ships, and planet on separate layers helps. Photoshop has a variety of ways to colorize a grayscale image. The tools I used in this illustration include gradient maps, color and overlay layers, and the Blend If feature, all of which I go over in the video. Gradient maps in particular are useful to apply cool, desaturated colors to the shadows of an area, and brighter, more vibrant colors to the highlights. A lot of detailing and painting went on after the initial colorization of the roughs for this image, but gradient maps saved time and effort at the start.

After establishing the colors, it's about applying all the details, the poses, lighting, expressions, and so on. The hand and head reference app, Handy art reference tool, is especially helpful because of its easy positioning and lighting tools. In this illustration, the rocky landscape, the cloth banners, and the metal support beams all involve photo textures, either applied as an overlay, or used as a base to paint on top of. Some of the details on the ships are custom shapes. Check out Long Pham's Gumroad* for some industrial and sci-fi custom shape packs. For the visible faces, I used the Handy art reference tool to help get the angle and lighting that I wanted. And the far-right figure's hands are just a photo of my hands with some color adjustments and a bit of painting on top.

That covers the overall process behind this illustration. Working quickly can involve a variety of tools and shortcuts, but it's also important to spend sufficient time on each step, especially when working with a client or a team. The early steps of gathering reference and finding the right composition, design, and style can greatly reduce time-consuming revisions later on in the process. If you're interested in a way to practice speed painting, Facebook groups like Daily Spitpaint can be useful, both as a way to practice and as a way to gain insight into how others tackle digital painting challenges on a tight schedule.