The original article is published by Intel Game Dev on VentureBeat*: Clapfoot: The seven-year overnight success story. Get more game dev news and related topics from Intel on VentureBeat. 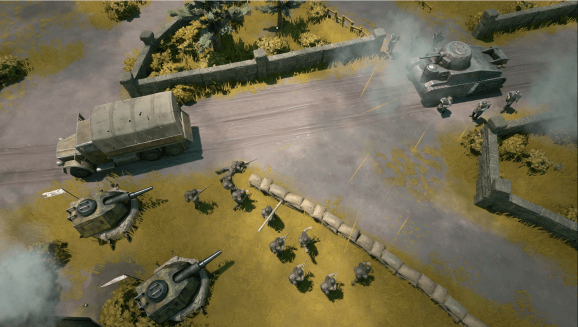 Indie studios are lucky to survive a few years, let alone seven like Clapfoot has. And 2017 is by far the best year the Toronto developer has ever had.

In August, Clapfoot released a work-in-progress version of Foxhole, an open-ended war game, onto Steam’s Early Access program. Foxhole plunges 140 players into a pseudo-WWII setting, and it’s up to them to figure out how they want to fight their war. The community, which began forming over a year earlier during a free pre-alpha phase, grew exponentially. The Foxhole server on Discord, a popular chat application, blew up to 50,000 people.

“Not only has Foxhole been the most successful game for the studio, it’s also the game we’ve always wanted to work on. … It’s been very stressful, but it’s also just — it’s kind of surreal. We never thought we’d be able to work on a dream project and actually get a business out of it. It’s been pretty fantastic,” said cofounder and programmer Mark Ng.

That success helped the team grow from seven employees to 12, and they’re eager to hire more people. They’re finally making the type of game they always wanted to make, but until recently, didn’t have the resources or technical know-how to do it.

Originally, Clapfoot started out creating mobile games. But as the market changed from favoring premium priced games to free-to-play titles, the team knew it was time to leave.

“At the beginning, when we first started working on mobile games, it was more about gameplay. The focus was on making a high quality game, where the gameplay was the dominant feature that would sell your game,” said Ng.

“Then it shifted over to the free-to-play model, where the important things are the monetization and analytics. It just wasn’t something we were very good at, and we also weren’t very interested in it.”

The developers turned to console and PC games instead. The idea for Foxhole — a massive multiplayer game where battles can last for days or even weeks — was still there, but they didn’t have any experience making multiplayer games. So to hone their skills, Clapfoot made Fortified, a four-player cooperative shooter with a 1950s alien invasion theme, for Xbox One and PC.

After Fortified’s release in 2016, the team felt like they were ready to tackle Foxhole’s more ambitious ideas. 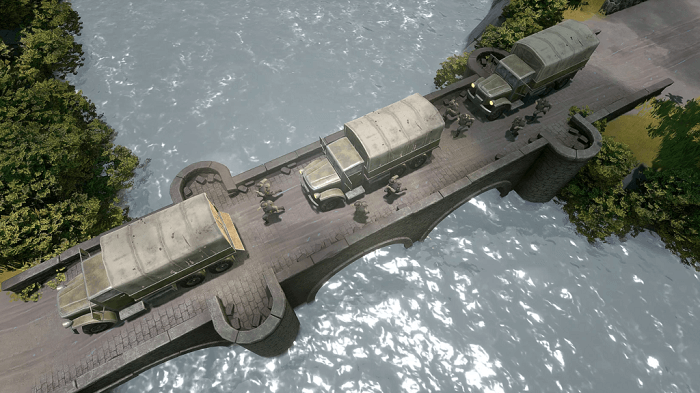 Above: Nothing about Foxhole’s wars is predetermined.

Foxhole is less about shooting and more about meticulous planning. When players enter the battlefield (fighting either for the Colonial or the Warden faction), they have to figure out how they want to contribute to the war effort. That requires coordination and strategizing with their fellow teammates.

“Supply lines, logistics, even mission objectives, they’re all set by the player. As an example, if there are weapons in the game, it’s not because the game spawned them. Somebody made those weapons. Somebody put them on a truck and drove them to the front line and now you have a weapon. The entire supply chain that drives the war effort is also in the hands of players,” said Ng.

Foxhole encourages teamwork through a number of different ways. First, and perhaps most importantly, Clapfoot wanted to make sure that the actions players could take would benefit the group as a whole. When the game was still in pre-alpha, players used to be able to make weapons for themselves by walking up to a building and spending the team’s resources to produce a gun. But it became apparent that some people were abusing the system by deliberately wasting resources.

In response, Clapfoot changed it so that players could no longer make individual weapons for themselves. They can only produce guns by the crate.

“Then, if you make a crate of weapons, suddenly you’re sharing with a bunch of people. You’re working with the group. You can’t just help yourself on your own…We try to avoid those types of mechanics. But it isn’t perfect yet,” Ng said.

This philosophy also ties into Foxhole’s progression system. Unlike other military-themed games, Foxhole doesn’t base your rank on the number of kills you get in a given battle. Instead, players can commend each other for being helpful, and the more commendations you have, the higher your rank will be. Clapfoot still wants to improve how commendations work, but it hopes that the system encourages people to play fairly.

“The game is still in early access, so we’re still trying to figure out ways for players to help each other,” said Ng. 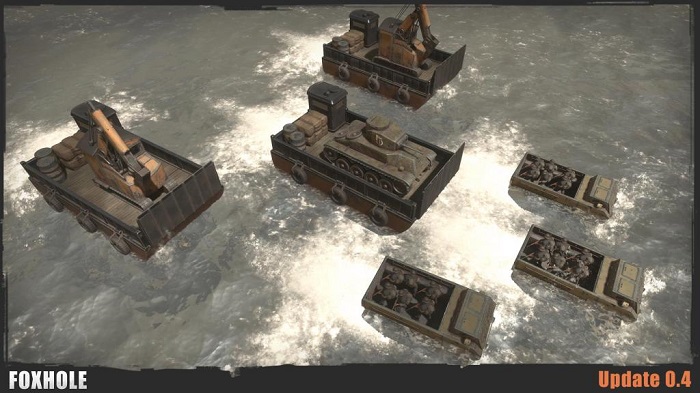 Above: Clapfoot recently added amphibious vehicles to the game.

Foxhole experienced a major side effect due to its growing popularity: individual wars weren’t as meaningful as they used to be. Before launching on Steam, and back when Foxhole had a much smaller community, Clapfoot would run one giant battle per week where everyone participated.

This made each war feel like a big deal, creating lasting memories for the players. But as word-of-mouth spread and more players joined in, Foxhole naturally became more segmented. It became easy to lose track of all the different player-driven narratives with multiple wars going on at the same time.

“We always wanted the wars to have weight. We didn’t want them to feel like, ‘Oh, I’m just fighting 100 wars over and over again.’ We have that problem somewhat right now, and we’re trying to fix it. But our goal was always to make it so each war feels like a unique event,” said Ng.

To address this, developers are exploring a new mode that will combine all the other wars into one match, increasing the max number of players in the process. Clapfoot is also trying to find the best way to award the victors. In the early days, the studio used to put together a war report after every match, which listed the names of all the players on the winning side, as well as a detailed breakdown of various stats (like the number of weapons made, buildings they destroyed, etc.). But that, too, had to stop as the game became bigger.

With the new mode and reward system, the goal is to bring back what helped make Foxhole so special in the first place. And it’s important for Clapfoot to get this right because Foxhole represents the type of emergent multiplayer experience they want to keep making in the years to come.

“We have huge plans for the future. I think that a game like Foxhole is just the first of many in this genre. We want this to be our thing,” said Ng.