The original article is published by Intel Game Dev on VentureBeat*: Refocus. Rebuild. Remake something new Get more game dev news and related topics from Intel on VentureBeat.

You might think it’s pretty easy to start a new game development shop and craft a hit when your résumé reads as a who’s-who of game development royalty. That’s not the case, though, as even Jason Coleman, founder and President of Sparkypants can attest.

His credits include working with legends such as Sid Meier at Microprose on Civilization* II, and also on Rise of Nations*, among others. After a spell contracting, Coleman revealed that many former colleagues from those days of high level realtime strategy game (RTS) development wanted to reunite with all the opportunities still available for crafting unique gaming experiences.

Their first game, Dropzone*, from the new studio, Sparkypants, pulls on some familiar elements of current MOBA games, but adds pieces that have defined RTS games of the past. What has changed for Coleman’s team is how the ability to rapidly iterate the game—almost daily, in fact—has led to consistent improvements.

“We can jam stuff in, rip stuff out, and it’s really driven our development process,” says Coleman. “It makes us think about games as gamers and developers, and also as spectators,” he adds.

This process also ensures that the original game design doc is essentially thrown out of the window. Initially codenamed “Sportsball”—with an aim to make it as competitive and accessible as sports—the core premise was to deconstruct the traditional RTS for the modern day.

“Vision for what we’re trying to do from the first day was simple: Can we reimagine an RTS for the modern day, and reconstruct it,” says Coleman.

It meant asking some fundamental questions: What are the biggest challenges we have as gamers? “Time,” states Coleman, “so we’re playing mobile games because that’s where we can find the time, and that’s where the 15-minute time limit came from.”

Limiting matches into this digestible format required a set of new considerations for the veteran crew. Chief among them was to still guarantee that the experience was really satisfying. 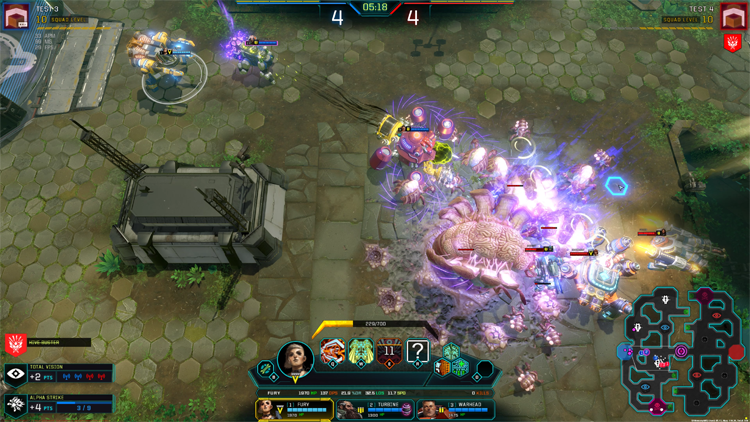 Above: Action gets intense in the strategy game, Dropzone*.

“But to do that you have to strip out familiar features of an RTS, such as base-building,” says Coleman. That resulted in focusing on other key elements that will scratch the strategic itch for traditional RTS players, as well as provide a core entertaining backbone that would entice new players into the fold.

“All the changes came out of experimentation. We had a saying that if it takes longer to talk about than to implement it we’ll just go implement it,” Coleman reveals.

One significant change to the original design vision was promoted by the community. Finally the team realized that after all their discussions about its merits, they could just build it and find out if it turned out to be fun. That’s where adding the ability to play three-versus-three came about, building on that first vision that the game should just be one-on-one.

“That absolutely came out of the community. We always said it was a stupid idea, and our hardcore one-vs-one players also thought it was a bad idea. But this was a perfect example of us talking about it so much and just dismissed it, and we really should have just made it at the start… It took us a morning to do a hacky version of it and it was immediately fun. But there is a skill curve to Dropzone that is steep at the beginning…so the three-v-three with one hero each lowers that drastically,” says Coleman of this significant change to their plan.

This addition also brought new players into the Dropzone fold as Coleman accepts that managing three heroes, understanding map control points, and remaining aware of your opponent can be “really intense from the beginning, and possibly also exhausting!”

Given the heavy competition in the MOBA genre, it was vital that Dropzone embrace its unique mechanics to become a standout product in the space. For the Sparkypants team that involved maintaining the intensity that’s so much a part of the RTS experience.

“The main resource to manage is the player’s attention span,” says Coleman of a core design philosophy for the genre. “The goal is to tune the game so that there’s always something to do, and always a little more than you can manage.

Having three heroes to control made a huge difference, along with giving them strategic reasons to split up. And so map control in Dropzone is important, as is ensuring there is the right balance of elements to do around the map,” explains Coleman.

Though it wasn’t the initial intention to establish Dropzone as a prominent eSport feature, additions like the Spectator Mode and Ranked play for one-versus-one play should help it carve a place in this burgeoning market. Coleman accepts that competitive eSports play is often driven by a relatively small number of hardcore players, but that these players—through gameplay videos and streaming—drive a lot of aspirational aspects.

For Dropzone the disputed, now popular three-versus-three mode, also afforded newcomers the ability to learn the ropes that they could then take into one-versus-one as they watch other players online and figure their techniques.

Coleman is also proud of the team’s studio-built game engine. Starting a new company and designing a new game can be a significant challenge in itself without the added pressure of dealing with core technical hurdles. In particular, the rapid load times let players change their heroes and skill loadouts, then quickly enter the sandbox mode and test new tactics. Understanding how the skills can work collectively is part of that skill component that has hooked the fan base throughout the game’s life in Early Access, and particularly now that it has gone free-to-play.

Though its roots may lie in the details of classic strategy gaming experiences it maintains a fun spirit in its heroes that include a dog and a brain!

“And we’ve been asked when we are doing a dolphin hero,” adds Coleman. A great deal of detail has been packed into a digestible 15-minute game format, and with the daily iterations and suggestions from the community driving efforts to improve the experience, expect Dropzone to be a serious factor for strategy gamers new and old.