Intel® Software Innovator and Intel® Black Belt Lee Bamber talks to us about his latest project, MyWorld, currently on Kickstarter.

I could be described as an old-school 8-bit programmer. I started creating computer games when I was 9, studied software at college for 5 years, worked for a software developer for 5 years, spent a few years working in Denmark on the LEGO Mindstorms product and finally created my own company back in 1999.

Tell us about your company, The Game Creators.

I started my one-man-band company in 1999 called Dark Basic Software which developed and published the DarkBASIC programming language.  A year later I was joined by my old boss from Europress Publishing, and changed the company name to The Game Creators to work on our first collaborative product “The 3D Gamemaker”.  Since then, we developed many products including Dark Basic Pro, FPS Creator, DarkGDK, AppGameKit and GameGuru to name some of the bigger ones.  Our goal has always been to simplify the process of making games, and make those products available at an affordable price so anyone can fulfil their dream of making their own computer game and opening a door into the amazing world of games development.

Tell us about your new game MyWorld.

Unlike our previous products which aim to give people an easy way to create and sell their own games, MyWorld shifts the focus away from monetizing user creations and puts additional emphasis on fun, creativity and sharing.  We are calling MyWorld a multiplayer sandbox game, which introduces the player to a universe that offers a host of games to play, and the opportunity to create your own games by transporting from world to world, exploring, building, and even cooperating to create your masterpiece. The software provides all the game mechanics, logic, player progression, and other features you would expect of a game, but keeps the door wide open for innovation, allowing new game objects to be constructed and new worlds to be planned and built.

In a typical game session, the user could start off entering a portal to a world created by another user, fight through the challenges that have been set, defeat the end boss and finally collect loot and XP rewards from the victory, then return home and create a world of their own, having been inspired by the game they just played.  They can chose from Role Playing Game (RPG), Racing and Sci-Fi graphics to create a specific style, or mash them up to create something utterly unique, and then share their world with the rest of the MyWorld universe, for others to discover and play.  Some worlds may not even be games, just a nice place to visit and explore. 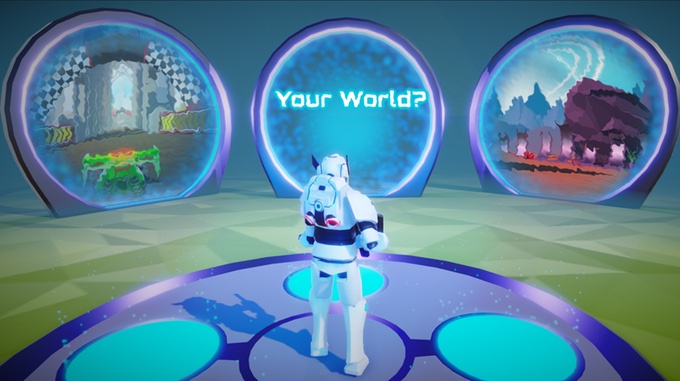 How did you come up with this game?

Many years ago, game development was a province of those who spent years learning the trade. In more recent years, almost everyone has experienced some kind of game making fun. Revolutionary games like LittleBigPlanet, Minecraft and Rust introduced players to crafting and constructing, and it became apparent that the world wants to make cool things.  As I've been developing game making tools for over 30 years now, it felt right that my team and I put our own spin on the genre with a product that would offer sandbox users something that would give their creations more life and purpose, offering visitors to these creations a real game to play and fabulous rewards for continued creation and play.

Tell us how you built it. Can you go into detail about how you developed it?

For the majority of my time as a developer, I've created games and engines from scratch, using programming languages such as C++ and high level graphics APIs like DirectX and OpenGL, often taking years to refine and complete. For this project, and to experience how the other half live, I chose the Unity* platform, which promised to abstract the technical voodoo and offer a rapid solution which could get our idea to market quicker.  My team struggled through the transition, and after some cultural adjustment, the project started to show signs of being something very special.  Choosing to sit on the shoulders of someone else’s technology has its advantages, which in this case is a building of coders somewhere making sure the next version of Unity provides the latest greatest engine features. 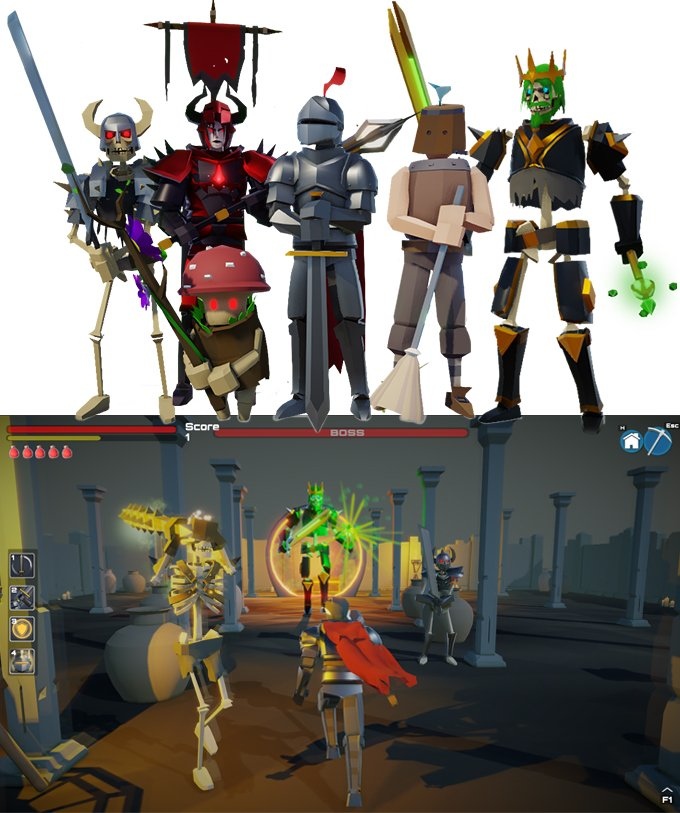 Once the game is launched, what future updates or new expansions are you hoping to add?

We plan to launch the game on Steam Early Access, which will give users a chance to provide feedback on early builds of the product and help us refine the experience.  It has already been designed to accept all manner of additional genre graphics and mechanics, but we wanted to focus on RPG, Racing and Sci-Fi to begin with as it presents all the major logic you might find in a typical game. RPG introduces the idea of narrative, stories, quests and close quarters combat.  The racing genre gave us the opportunity to add vehicles, tracks and courses, which could be used for simple sports or mashed with other elements to provide a form of transport in your worlds.  The Sci-Fi genre allows us to experiment with projectiles and lasers, plus hovering and flying machines, not to mention robots.  Our kickstarter also includes a platformer genre which would add the gadgets you might find in your favorite 2D platformer, but transformed into a 3D experience such as springs, traps, collectables, large running jumps and intricate puzzles.

Is this type of game the first of its kind?

MyWorld is the first sandbox game which rewards users, irrespective of whether they play games or create them.  As you explore worlds, or create your own, you are awarded XP and bonuses, and with these you can increase your collection of items. New characters, enemies, vehicles, scenery, and special objects will encourage you to create more and play more to earn those kudos winning prizes. It is also the first to carefully craft the game play experience so users do not have to provide their own logic, allowing any game made within the MyWorld universe to be highly enjoyable, fair, and rewarding to the player.

What made you decide to use Kickstarter?

We have self-funded the project for the best part of the year, and focused on the RPG genre during development. During our early alpha testing, we realized that MyWorld needed more places and genres to explore, for those users who prefer futuristic or fast paced games and experiences.  Additional funding would accelerate the production of these assets and allow us to ship the product much sooner, and having had some success with Kickstarter before, we knew it was a great place to share news about an early product that was still in a prototype stage.

What are you hoping for with MyWorld?

We want to create an interconnected universe of worlds, created by an imaginative community who want their visitors to experience fun and even awe as they pass through their part of the cosmos. Users who can zip from world to world, sometimes building with friends, sometimes playing a challenging game world solo, and always enjoying themselves whilst flexing their creative muscles.  We are hoping that as users create and share their worlds, the universe grows into a diverse and magical place to visit, and we are looking forward to supporting them with more genres and places to explore.

The game is still in its early stages, but what kind of feedback and responses are you getting so far?

It was fortunate we had access to a game making community from our previous products, and we had been able to show them early versions and run polls to find out what they thought. We got some great responses from those who liked the graphics style and game play, and saw the potential if the product had more assets and objects to create with. Some users expected a full-blown game maker with standalone export features but we've been developing tools for 15 years and this was to be expected.  I think some users where a little shocked we would create a game rather than a game maker, but perhaps our attempt at blending these two worlds will create something unique for gamers to enjoy.

Is there an ideal audience for MyWorld?

We initially had an age range of 8-14, but as the development progressed we realized the product would be fun for anyone with a creative spirit who wanted to create new things using their imagination and sharing those creations with others. We finally decided on our target being "creative users who have no previous experience with game development".

In MyWorld you are able to switch worlds, etc.; is it pretty seamless to switch between gameplays?

We've already run some tests in this area, and found that games created for a single player are ideal games for teams to play in co-op mode, and we ensure the combined strength of the players are matched by increasing the powers of the enemies and end boss characters when multiplayer is detected.  Thanks to the HubWorld which acts as a lobby of sorts, you are able to discover and play solo through a portal called the World of Worlds or enter a join portal which scans for other active worlds for you to step into. We are using a technology called Photon which handles much of the complexity, with the added bonus that the same code can be used cross-platform in the future to allow users to play the same world across desktop and mobile devices.

Moving forward do you think you’ll continue to use the Unity* platform for projects, or revert to the more familiar C++ and high level graphics?

At the moment I am fortunate to be able to fund the use of both approaches for the time being.  I want to see how both tracks evolve, as one solution may win out over the other in time.  The Unity* platform is a powerful foundation, but its abstracted access to the lower-level capabilities of the device might prove an obstacle when certain features are needed, and with any blackbox middleware, I'm at the mercy of any bugs that are buried in there. The beauty of C++ and developing engines from scratch is that you're able to gain access and fix almost any bug without the need to wait for an update.

In addition to MyWorld, are you working on any other projects right now?

After the success of game makers such as The 3D Gamemaker and FPS Creator, I always felt there was room in the market for something that could create a 3D game in just a few minutes, but did not require the use of complex coding or artistic skills.  This product eventually became GameGuru, and I have been developing it now for several years.  In terms of offering every type of game, in varying degrees of depth, and in the exact form that users demand, there is a long way to go. I sometimes think the concept was a little ambitious, and initially naive, but in general the community backing GameGuru have been supportive and some have even taken their creations to Steam Greenlight.  I also fiddle with robots in my spare time, but that's partly to stay sane and give my brain a change, if not a complete rest.