Intel® Software Innovator Pablo Farias Navarro is a teacher at heart. He tells us about his life from his humble upbringing in Chile to moving abroad and creating online courses to teach people how to use today’s technology to develop games. With a focus on game development, and now getting more involved in Virtual Reality (VR), Pablo offers some amazing opportunities for beginners.

I’ve been interested in making games since I was a kid. I would draw mazes and imaginary games on notebooks, and at the age of 14 a programming book fell into my hands and I learned some C++. Learning the basics blew my mind … but I only saw it as a hobby. Growing up in Iquique, a mining city in the Atacama Desert in Chile, all of my role models when it came to "successful career people who were good at math" were in mining and engineering, so instead of I followed their path and studied civil engineering at university.

After working as an engineering consultant in groundwater modeling, I noticed that an environmental assessment report made 30 years ago was almost the same as a report I was working on at the time - the only difference being that they did their calculations by hand, whereas I used Excel and other modeling software. I found the job boring, and felt that if things hadn't really changed in the last 30 years, it was highly unlikely that much would change over the next 30.

All this time I had been working on games and coding in my free time, and I finally decided that I wanted it to be my career and not just a hobby any longer. I was ready for a big change so I moved to Australia, changed careers, and did my postgraduate studies in IT and software development.

For the first time I was able to fully immerse myself in the topics I really enjoyed. After finishing my Masters I started working as a web and app development consultant and this was the start of what eventually became my company, Zenva. I found it easy to find clients and I loved learning new technologies and building things that solved real problems for my customers. This was enjoyable, stimulating, and I was working on things that simply didn’t exist 30 years ago. However, I was building other people’s dreams, not mine. Things were due for a change.

During game making in my free time I got into HTML5 game development. The idea of building games using open source technology was very new in 2011, and I found it intoxicating. In 2012 I found a website, Udemy, where anyone could create online courses and sell them without having to set up their platform. Today people can easily set up their own online schools with tools like Teachable or Wordpress-based Sensei, but at the time it was a very new thing.

Everything just clicked for me and I knew I had to make a course on how to make HTML5 games, not only for my own interest in consolidating what I was learning but also to make extra income so that I could stop doing client work.

I was afraid my first course would get bad reviews or silly things like people complaining about my code indentation or my English accent, but people loved the course from the start and the response I received overwhelmingly positive. Some people even sent me thank you emails and described how the course had been helpful for them, or how they were using it in schools and such. It turns out, there were many people just like me out there, who liked to learn on their own and who wanted to make games and work on cool projects in their spare time. 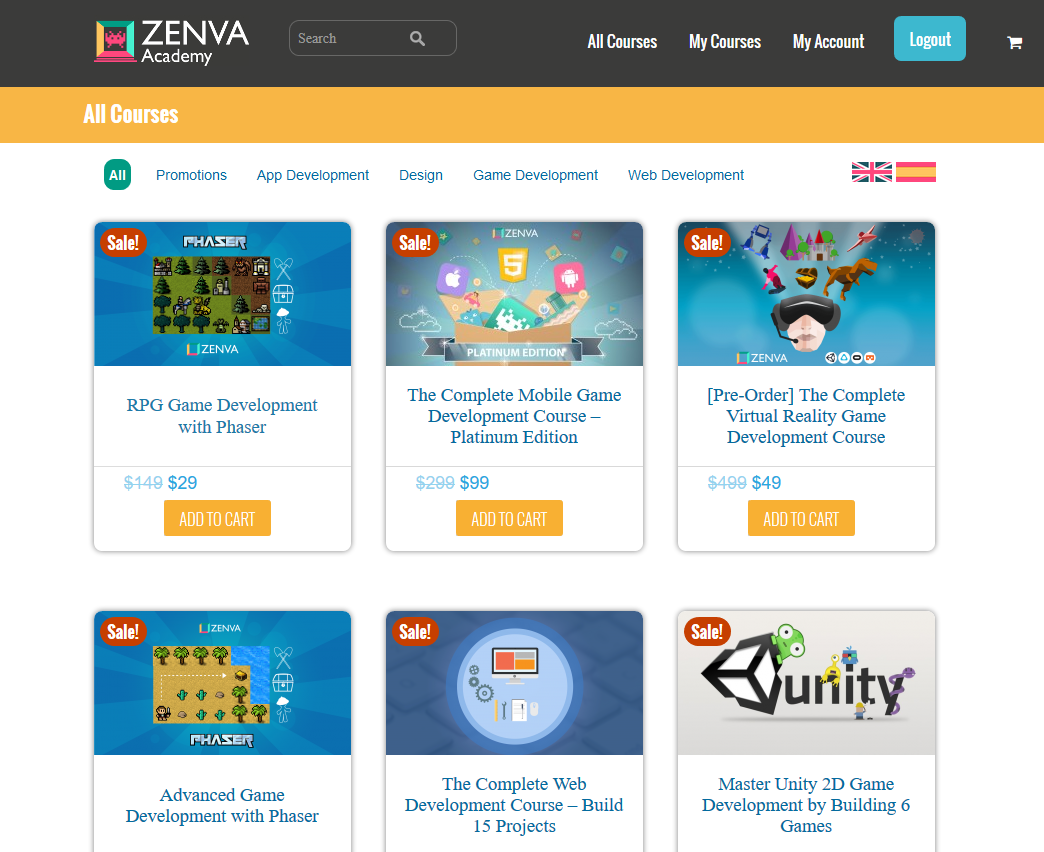 Eventually we built our own e-learning site Zenva Academy, where people can find a curated collection of high-quality courses, some of which are not available anywhere else on the web, on topics such as game development, VR, modern web technologies, computer vision and native app development. I’ve continued to work on courses, educational material, and some workshop training.

Codemurai (available on Android and iOS), a coding app to learn programming with mobile-first content aimed at developing countries.

The Complete Mobile Game Development Course - Platinum Edition, a massive course on how to use the Intel® XDK and other tools build 15 2D games of all genres - role-playing games (RPGs), platformer, spaceships, you name it!

The Complete Virtual Reality Game Development Course, currently in the making, aims to be the world's most comprehensive course on how to create VR games in Unity*. The goal of this course is to allow anyone who has the motivation and is willing to spend the time, to go from zero knowledge to creating their own VR games in no time. 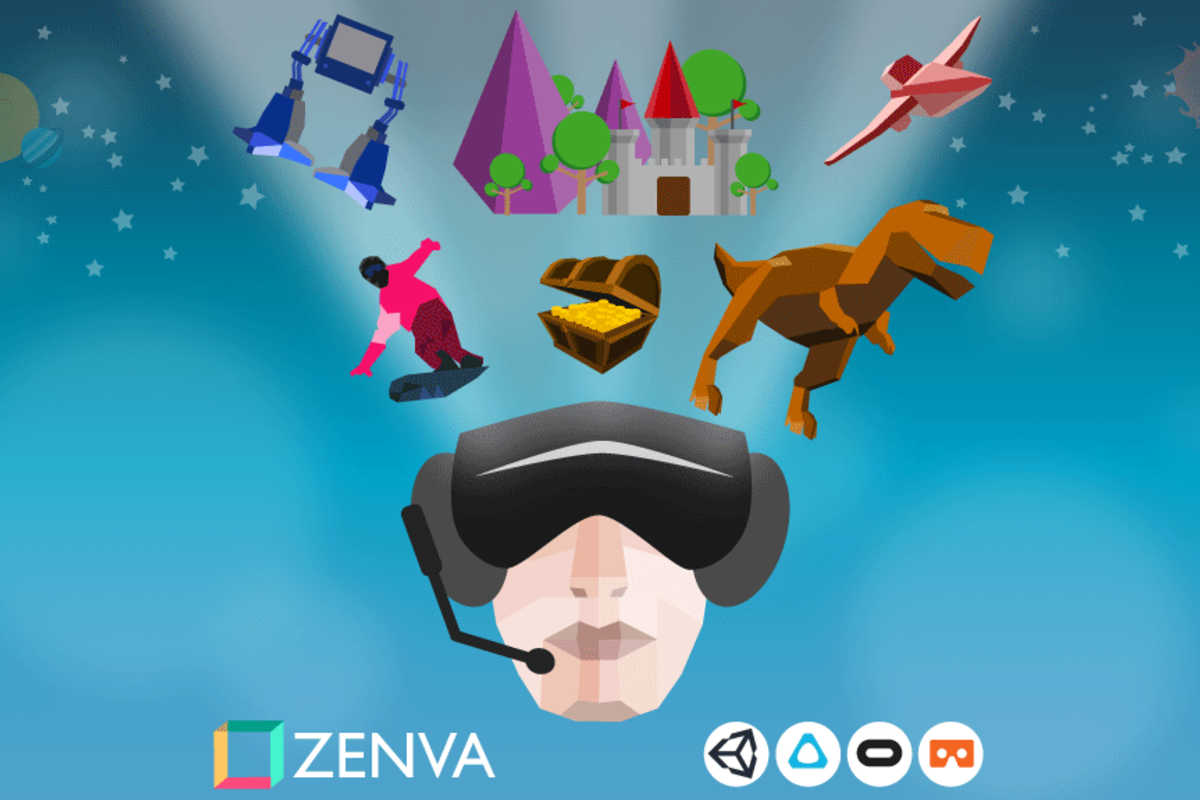 As a fan of movies such as The Matrix, Inception and ExistenZ, I couldn't help myself and had to purchase a headset after trying a demo at a local meetup. I went for the Samsung* Gear VR because the quality is quite good for the price, and playing Land's End was an amazing experience. I had high expectations, but other than a couple of exceptions like Dark Days, I found that most of the games available were pretty low quality and overpriced. This led me to start researching how hard it was to actually make my own VR games and experiences.

Since I grew up on 2D game development, I was curious to learn about 3D modeling and game creation, so I decided to learn Blender* and Unity purely as a hobby. It turns out, 3D modeling is actually a lot easier than 2D drawing or pixel art, and Unity is not hard to learn either. A win win!

I’m planning to spend at least the first half of 2017 mostly making VR games, and thanks to my Kickstarter* campaign I've able to do it so far, building cool stuff and learning new things each week. This will be a really awesome course - you can read the development journal here. The course will be considered successful once I see students publishing their own VR games. That is one of the things that excites me the most.

My favorite games change every month, currently I’m playing: Clash Royale on the phone. It’s super addictive, engaging, and I love the approach of a real-time multiplayer game with very short matches. I'm also playing Arizona Sunshine, a HTC* Vive game where you kill zombies. It's just like being in The Walking Dead, very immersive! Everything I play gives me more ideas for the course.

There are two trends in VR that I would like to see happen. One of them is having my full body, or at least my hands show up on VR. Using controllers like those in the HTC Vive makes a big difference compared to not using them, but having my actual hands would bring this to a whole new level. Also, I find the headsets too heavy and there is too much setup to do. Every time I want to use VR it’s like I’m assembling some sort of time-travel machine. There are just too many cables, too much stuff, and I hate the sensors. I’m hoping future developments come up with just a thin headset I can put on. Period.

One of the biggest problems we see newcomers do at Zenva is to attempt to create very complex projects as their first game. A massively multiplayer online role-playing game (MMORPG) often comes up as the first idea of many people. I find that when people focus on smaller goals, they are more achievable and concrete, and people end up doing more.

Perfectionism is another big enemy. If you want to make things perfect from the start, you won't have a good time. Making mistakes is part of the learning process. Imagine a kid that's learning how to speak while trying to not make any mistakes - they would never make it!

As crazy as it sounds, we are actually preparing a new Kickstarter campaign to be launched within the next couple of weeks! I know, insane.

The new topic is secret for now, but let's just say it will be a collection of courses on a certain topic that's very popular and high-demand these days, and involves self-driving cars and the IoT!

Even though you'll see me in the campaign video, I've partnered up with a very smart computer scientist and researcher who will be building the projects and recording the lessons, so this won't be a distraction from the VR course.

Other than that, I want to start running local workshops and training people on Unity and VR.

I've been a part of the Intel Software Innovator Program since 2015. I’m very thankful for the opportunity to participate and be part of this community. What I've enjoyed the most, by far, was being able to meet other innovators at the Summit in Bangalore. It was really inspiring to get to know people from such different countries who share a passion for learning, teaching and building cool stuff. It was really an eye opener to what's happening elsewhere in the world, and how much positive impact this community is having.

I'm really looking forward to working in VR more with Intel, I have a lot of ideas on how I can take this technology and make it more useful and accessible to others.