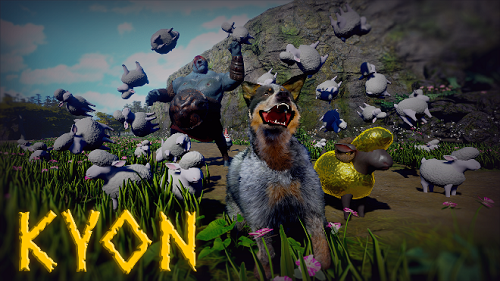 The Savannah College of Art and Design* participated in the IUGS 2016 competition and found that it was a great experience for the students, giving them an opportunity to present their work in front of judges. This year, SCAD sent out a department-wide call for entries. Faculty members evaluated entries based on a balance of game design, aesthetics, and overall product polish. “Kyon” was chosen as the best among its peers after the students produced an interesting playable version in their first 10 weeks of development.

The team says: “We were actually in development of a totally different game last year, and while going over what types of ambient wildlife we wanted at one point, sheep were a popular option. A running joke began of having sheep play a more and more central role in the game. Eventually, we were tasked with developing a different game and we decided to just roll with what was originally just a joke and develop a sheep-herding video game.

Kyon is a top-down third-person adventure game where the player assumes the role of a sheepdog named Kyon in mythological Ancient Greece. Kyon is sent by his shepherd, Polyphemus, to find lost sheep and bring the herd home. The player must guide the herd with physical movement and special bark commands through dangerous environments filled with AI threats. All art assets are made using a PBR workflow, and the art team utilized advanced software for realistic effects such as Neofur and Speedtree. Level streaming allows an entire play through with no loading screens to interrupt gameplay.

The team made use of Intel products in each of its machines, relying heavily on the power inside to push the boundaries of its sheep herd size and particle systems. The game was made entirely on machines using Intel® technology.