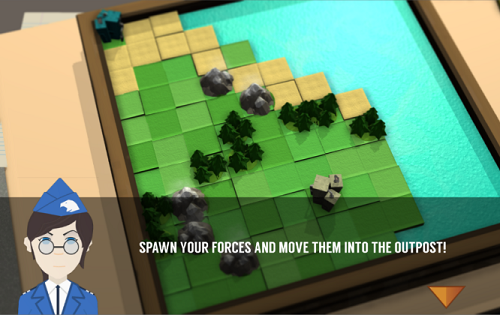 MAGIC Spell Studios LLC at Rochester Institute of Technology (RIT) looks forward to the Intel University Games Showcase each year. This is an incredible opportunity to experience what the most talented students in nationally ranked programs (by the Princeton Review) are creating. The future of our industry is in great hands with the talented, passionate visionaries who showcase their work at this event. Choosing John Miller to represent RIT was an easy decision to make. We were first introduced to John last spring following his participation in the Imagine Cup finals. John has all of the skills necessary to succeed and be a leader in this industry. His work ethic, passion, and talent are impressive and he is a terrific example of the caliber of students that we can offer to game development companies.

John Miller says: “’Gibraltar’ is the game that I wanted to play while sitting in the back of class during high school. I wanted a game that I could play with one hand while still listening to the lecture, and that would hold my attention but wouldn’t make me feel trapped into a 45-minute session. I wanted to play something that was fast, simple, and low commitment while still strategically deep and intellectually stimulating. I also wanted to bring back that experience of sitting at a computer with a friend and playing old games like ‘Advance Wars,’ ‘Lego Star Wars,’ and ‘Backyard Football.’ The idea of Gibraltar bounced around in my head for a year and eventually I started putting those ideas down on paper and in my senior year of high school, I started development on the game. The art style and some mechanics have evolved along the way but the essence of that quick, lightweight strategy game is still there in Gibraltar today.”

“Gibraltar” is a quick, turn-based strategy game in which two players send armies of adorable robots into battle for control of the game board. The more territory the player controls on the board, the more they can move their robots on their turn. This means that players are free to craft their own strategies and game play is very fluid. A match of Gibraltar usually lasts between 5 and 10 minutes, so you can fit a match in anywhere. Gibraltar is meant to be played between two players, sitting at the same screen. That kind of head-to-head competitive experience is something John always enjoyed. The player has four cute robot types to choose from when setting up their army, each with its own strengths and weaknesses. You only get to spawn your army once, so choose its composition carefully! The synergy between the different pieces allows unique gameplay and endless strategies and is simple enough for everyone to pick up. Players can also use special abilities that can change the course of the game but they are expendable and cost action points to play. Gibraltar features a story mode to help introduce players to the game and includes a fun cast of characters. The game ships a built-in map editor for players to design their own maps and play them with their friends.