In a habit I picked up from one of my Engineering heroes, Rich Hickey, I’d like to start with a definition.

(Aside: Rich Hickey is the designer of the programming language Clojure and did an amazing talk, available on InfoQ, called Simple Made Easy. You should watch it)

ˈprezəns
noun
The state or fact of existing, occurring, or being present in a place or thing.

Take a look at those definitions, the first is the literal definition of the word ‘presence’ while the second talks about the experience of presence itself. Both describe the concept of existing, believably, in a place; of persuading a persons perception that the world they are now perceiving is the world in which they are actually now ‘present’.

To me, that sounds a lot like the goals of VR; create a virtual world that someone can believably exist in, and persuade their senses that they are actually present in that world…and it looks like the, growing, VR industry agrees with me.

Brendan Iribe, CEO of Oculus, dedicated keynote time to the concept of presence at Oculus Connect back in 2014. In that keynote he identified five key technical requirements needed to produce presence, these were:

Since that keynote we’ve met, and in some cases exceeded, these technical requirements; even now though some VR experiences fail to deliver the, often elusive, sense of presence. So what have we missed, what have we been over looking in these discussions?

I contend that once you’ve met that minimum bar of technical requirements the biggest indicator of presence is not graphical fidelity, or ‘realistic’ visuals, but consistency with the users expectations, consistency with that internal model of the world.

The Principle of Least Astonishment, also known as the Law of Least Surprise, states:

If a necessary feature has a high astonishment factor, it may be necessary to redesign the feature

In general, the principle can be taken to mean that a component of a system should behave in a manner consistent with how users of that component are likely to expect it to behave; that is, a user should not be “astonished” at the way it behaves.

To put it another way, people are part of the system, anything you design should meet the users experience and expectations, and build upon their pre-existing knowledge.

So, what does that mean in the context of VR?

Consider a hypothetical room. In that room is a table, on that table is a coffee cup, and a pile of tennis balls (yes, it really is a weird room, and no, I doubt anyone would actually build this…bare me with, please).

I won’t belabor the point further other than to say that early research seems to agree with me. The conclusion of “Presence: Interacting in VR?” [Martijn J. Schuemie, Charles A.P.G. van der Mast, Delft university of Technology, The Netherlands] states “this article clearly determines interactivity of virtual environments as an important cause of presence”. Obviously it’s still too early to claim this as an absolute fact, but anecdotally it seems to hold up.

So…what does this mean for Arizona Sunshine? I’ve talked a lot about theory, but I’ve still not actually talked about the game that’s right up here in the article title.

Firstly, before I go any further I would like to thank Vertigo Games for working with us on Arizona Sunshine, it’s a very fun game that we’ve used at several different events, always to fanfare from those that try it. Check it out on their site. 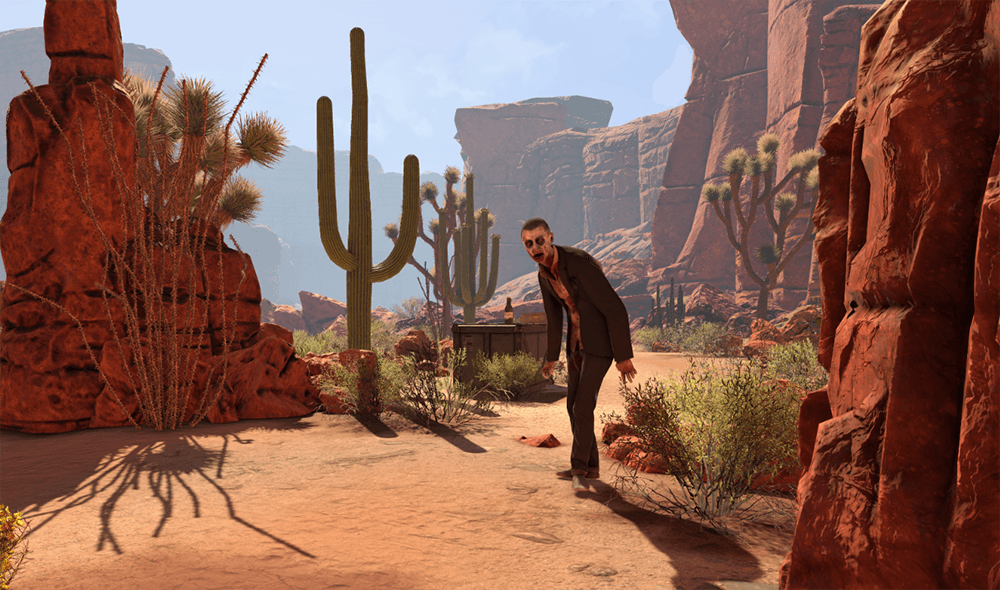 With that said, I should point out that Arizona Sunshine does a number of these things very well out of the box. Consider the tennis balls analogy above. That is actually straight out of a demo from the Intel VRDC booth. The first thing one of the users did was see a pile of tennis balls, walk over, pick them up, and start throwing them at zombies…and it just worked, the zombies even reacted. Great work Vertigo Games.

So what did we add?

The most obvious stuff comes in the form of environmental destruction and carnage:

…or my personal favorites:

This one is pretty simple, the game has wind effects now. Plants and cloth sway appropriately in the dynamic breeze.

Finally, we worked with Vertigo to add richness to the background. You’ll see carrion birds flying overhead, all with flocking behavior, and you’ll see hordes of zombies in the background.

Short answer, if you meet the old Oculus min. spec (Intel Core i5-4590): yes…but you won’t get these presence improving effects. For those, you’ll need a high-end Intel Core i7. Just ask Tom’s Hardware.

The truth is, VR is a much more demanding workload that classic monitor driven gaming for both the CPU and the GPU. The move to 90FPS, low M2P, and 2160x1200 pixels per eye, dramatically increases the total compute requirements. In many cases, and increasingly, the GPU is so swamped keeping up with rendering that physics is being moved off onto the CPU. The CPU becomes responsible for this additional work, while still needing to run the complete game simulation, all in 50% less time. Even todays high-powered Intel Core i5’s can’t maintain 90FPS with all of these extra features turned on.

The exact technical reasons for this are many fold and complex, and I’d like to leave answering those to both Vertigo Games and the Intel engineers that worked with them. Check out the video below for the whys and hows of i5 vs i7 in Arizona Sunshine.