Hey game devs! I’m Tanya, the lead of Kitfox Games, a six-person studio in Montreal, Canada. We released Moon Hunters to desktop in March and PS4 in July. Moon Hunters has six player classes, and we’re often asked how we designed their gameplay. The short answer is that we iterate. Many times. 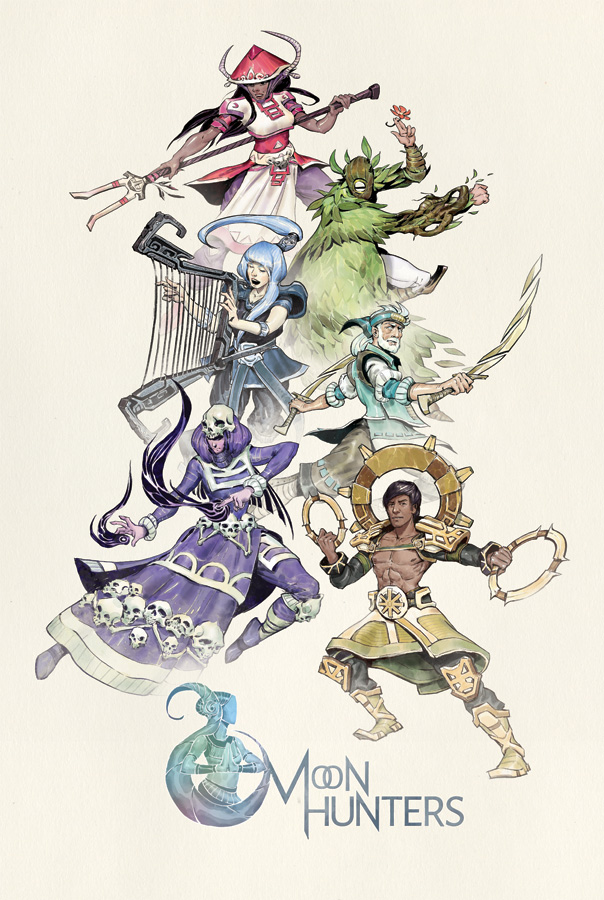 I am happy to share our process for that iteration with you, based on what we learned over the last two and a half years of Moon Hunters development.

The truth is that there are many elements to consider when creating a player character in any action-combat game. In order from most to least obvious to the player, the key aspects of a character are:

For certain well-worn archetypes (such as a Warrior character) you could side-step the creation process and just jump into making a melee character based on Link or Kratos. After all, you can reverse-engineer each of those aspects from the start, and then save time, right? You can always add a twist later! The danger is that simply “injecting uniqueness” into an established character design is harder than it seems, because everything from enemy abilities to stun timing to invulnerability frames are related in ways that are difficult to figure out until you build it from the ground up.

So if you don’t know why the wheel was made the way it was, you should take the time to figure it out. I won’t pretend that all six player classes in Moon Hunters are perfect, but I can defend every single character ability on the grounds of how it achieves the goals we set for it. Every decision was deliberate, and we learned more from each mistake along the way.

Our internal process for creating a character examines each aspect, in the following order:

Let’s pretend we have a relatively blank slate. We’re making an action combat game. How do we design a good player character?

Even in a single-player game, the most important element of a character’s design is that the player can recognize the character in the game. Whether you’re playing as a dragon, a robot, or a ball of sludge, the player should look at a screenshot and not only see where the character is on the screen, but also think it is cool (or if your desired aesthetic isn’t cool, then cute or sad or whatever else). Why does anyone want to play this character? Why does it exist?

Personally, I like to choose a single element to base the whole character idea around. For the Ritualist, this was “shadows.” Based on this, I wrote a small flavor statement and the artist drew a piece of concept art.

“The Ritualist uses mathematical magic to manipulate dark matter in the universe. Ranged/control?” 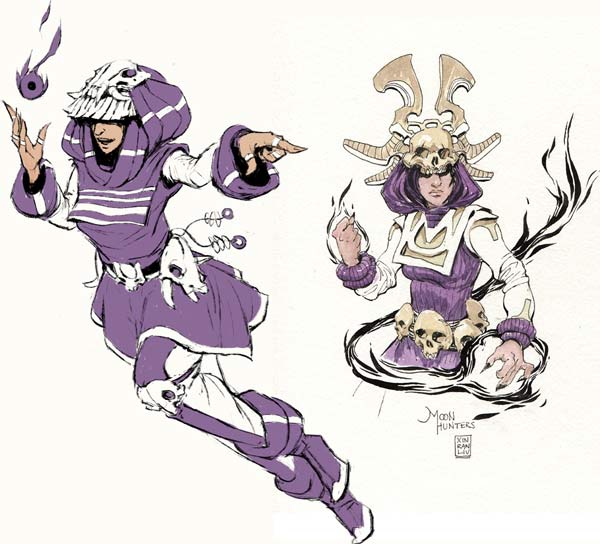 So now the team has an idea of why the Ritualist exists, and what the goal to achieve is, with all future development of the character. Dark, intellectual. If you’re making a multi-character game, I would highly recommend finishing this step for as many player characters as possible to make sure that each character still feels unique when they sit next to each other in the player’s mind. The “ranged/control?” bit of the pitch was added for us after all of the four base classes had been defined, as the other three seemed more melee-based.

Now it’s time to prototype! Using placeholder art, a gameplay designer plays around with a few different possible ability types and test them against different enemy types, always keeping in mind the unique purpose and flavor of the character. This can take a while. Take your time.

For the Ritualist, her base abilities became firing ranged shadow-orbs, teleport, and spawning a black hole to draw enemies in towards its center. These abilities give her the most intellectual-feeling attacks. She also briefly had a Shadow Wave type attack to focus her damage, but all of the characters later underwent streamlining, removing an ability to differentiate them from each other (for increased co-operative play depth).

We didn’t take any screenshots of the programmer art during prototyping, so the above animated gif is after an artist treatment (step 4), even though the mechanics themselves were set during Step 2.

It’s worth noting that efficacy and depth are dependent on the types of enemies the player will encounter; if you’re making a bullet-hell type of game, your character’s mobility will be much more closely tied to its efficacy than in your average dungeon-crawler. Area of effects won’t be very effective if you mostly fight single targets. There is no mathematical formula to tell you how to implement the vision of a character and achieve its atmospheric goal. Start prototyping, playtesting, and be honest with yourself.

Step 3: Accessibility, “the Who”

Accessibility is mentioned here if it hasn’t been defined by now, the designer decides who is playing the character. How challenging or risky is it to play this character? Challenge is a popular design goal, but defining what that means within your existing combat framework will help place this character more firmly in its role.

For example, we discovered during prototyping that the Ritualist would probably work best as a moderately-difficult character. She’s available from the start and appealing to those with experience in twin-stick shooters. As an “intellectual” type character, even in prototyping, she felt more light and fragile than the melee characters.

Here, the gameplay designer/programmer gives control to the artist(s). The artist defines the key animation frames and effects for the character, as well as any visual mechanics, to express that uniqueness within the gameplay constraints defined in steps 2 & 3. Resist the temptation to add too much detail now, wait until the gameplay is completely nailed down. It’s wasteful to get too deep into perfect, polished animations and effects.

For the Ritualist, this took the form of the shadow orb, which follows her around everywhere she goes, and her pants were swapped with a wider skirt to make her feel more “floaty” and mysterious as she teleports around. However, the distortion filter to the black hole ability wasn’t added yet, because we weren’t sure what exactly the radius would be. 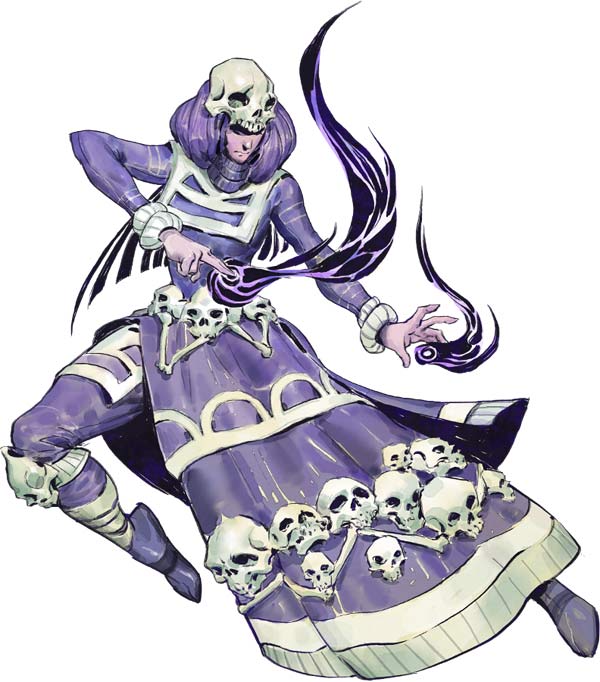 After Step 4, since we now know who is supposed to enjoy this character, we can also start playtesting with this character. Does our intended player they actually think it’s cool?

Depth means different things to different people, but I use it to mean the “dynamics” of a character: interesting player behaviours, based on combining abilities. If players all use the abilities you’ve given them in exactly one way – a certain timing or sequence – it probably means there is not enough depth there.

Chances are that when you initially prototyped the character, you had at least one dynamic in mind between the different abilities, but often these can only be verified after extensive playtesting and adjusting.  I would wait until all player characters reached at minimum step 4 before attempting depth testing, because there might be unanticipated dynamics (for better or worse) across the characters already.

A perfectly designed action-combat character would not only allow experts to discover advanced techniques to maximize their efficacy, but also it would support several different uses, which empowers even expert players to adapt to different challenges.

Initially, the Ritualist’s black hole ability went in the direction the character was facing, and went out a set distance, because we thought it would be easier for newer players to deal with fewer variables. By adding an optional charge-and-release functionality, expert players could experiment with aiming and range, which resulted in more varied positioning strategies and timings.

Depth is also a standard excuse for feature creep, so watch out! You could get stuck in an endless loop of trying to increase depth. As we’ll discuss shortly, there is no way to know when it is ”deep enough” and you are done.

It’s highly recommended to go back to steps 2, 3, and 4 after each and every depth improvement to verify that each element is still functioning and serving the character vision from step 1. Efficacy and (the intended) accessibility are essential. If a character is ineffective or unusable, there’s no point in adding further depth because nobody will enjoy the character enough to discover the love you’re pouring into it.

Step 6: Repeat Until You Die

Steps 2-5 should be iterated, again and again. You’ll never really be done. Sorry. Much like any other art form, action-combat design is all about deciding when you’ve reached the finish line. Nobody will give you a diploma and congratulate you on achieving your Complete a Character goals. It could always be a little bit more X, or a little bit less Y, or try out a hint of Z.

The fuzziness of the end goal is a side-effect of how developed this particular genre of gameplay is. There are so many excellent examples of combat design, and more are released all the time. Your game will struggle to find its place among them. Every tweak to the art can have a gameplay impact; every adjustment of the abilities can require another art pass.

Even if you try to avoid every possible risk and create a relentlessly detail-oriented clone of another game’s player character, many elements that seem like minor considerations (screen resolution, controller style, art style, framerate, character height) become problems that influence every element of the design.

The good news is that if you find yourself on an iteration loop, you’re in good company. Every great character had many iterations before it found its sweet spot, from Nathan Drake to the archers of Towerfall. Keep at it and your players will appreciate the hours you put in.

While I wrote this description, the programming and the hardest work of system design described here was mostly done by Jongwoo Kim, Henk Boom, and Mike Ditchburn. And of course, Moon Hunters would be nothing without the beautiful character designs of Xin Ran Liu and G.P. Lackey, or the lovely animation talent of Mike Horowitz. Most games are a team effort, and Kitfox Games are no exception.

Creating the six heroes for Moon Hunters probably took more time than any other single feature in the game – procedurally generating the world, the metagame, the dialogue system etc. We could have easily spent another 1000 hours on them.  Luckily, thanks to enthusiastic player support, we are in a position where we can keep improving the game, through patches and hopefully a DLC in the future. Maybe we’ll even introduce another player class someday. Maybe. Wish us luck.

Meanwhile, if you use our hero design process, drop me a note to so I can cheer you on at tanya@kitfoxgames.com, or Tweet us  @kitfoxgames!