The original article is published by Intel Game Dev on VentureBeat*: Hob and the art of Runic Games. Get more game dev news and related topics from Intel on VentureBeat. 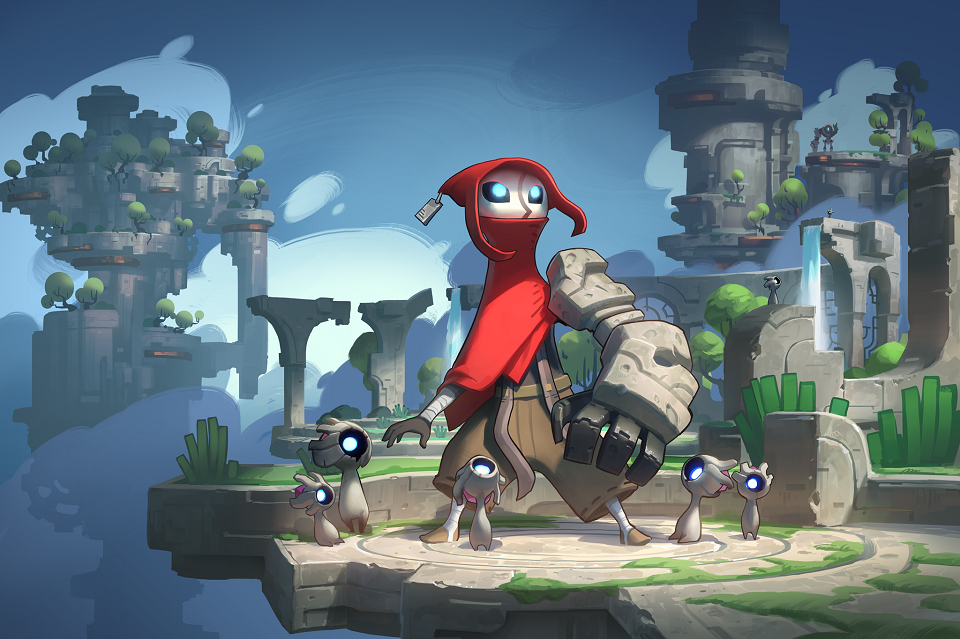 Defining a visual style and language can be as important to a game as its main character, levels, and challenges. The immediately perceivable visual style and tenor can sway potential players before they have any understanding of the gameplay itself. Arriving at that point, however, takes time and, in most cases, multiple iterations as developers hack and slash at code and ideas before landing on the direction that will propel them forward.

"It was just called Adventure Game internally, because we knew we wanted to make an adventure game that was single-player," says Wonder Russell, the 'Minister of Culture' at Seattle-based studio, Runic Games. Coming off the success of action-RPG Torchlight, its console conversions, and then its sequel, the studio considered its next project. As with most creative groups, there was no shortage of ideas, but the challenge is always to figure out the right one or the best one for that group.

"We had a lot of horror game suggestions," says Russell, "but had to question if it would be weird after making Torchlight to make a game about Dracula." This process led the team down the path of working on a space game for over six months before that was ultimately scrapped in favor of a new direction.

Adventure Game evolved through several iterations into what is now Hob, "but we didn't know that's what it was at the time," says Russell. One intention, coming off Torchlight 2, was to scale back the size of the game into something more manageable for this team of 24 people. Pulling inspiration from office favorite games like Journey and Ico, Hob has emerged as a Zelda-like action-adventure-puzzle game with a distinct style, and that's no accident.

That style was developed over the course of this iterative process, and was already established when concept artist Kristina Ness joined the Runic team to push that creativity forward. Her hiring, however, is possibly an object lesson for aspiring artists—in fact, all aspiring pros in any discipline—hoping to join a game development studio.

After Hob was announced at PAX in 2015, Ness saw the "rectangular grass blowing in the breeze, and I thought 'I could totally draw that'!" But that was only part of the story. After submitting her resume, Ness considered how her application might draw more attention.

"I know I can draw in this style, so how do I show them I can do that?" she considered. "So, I drew some rough concepts, sketches, and thumbnails, and I got an interview request the day after." Nice approach! 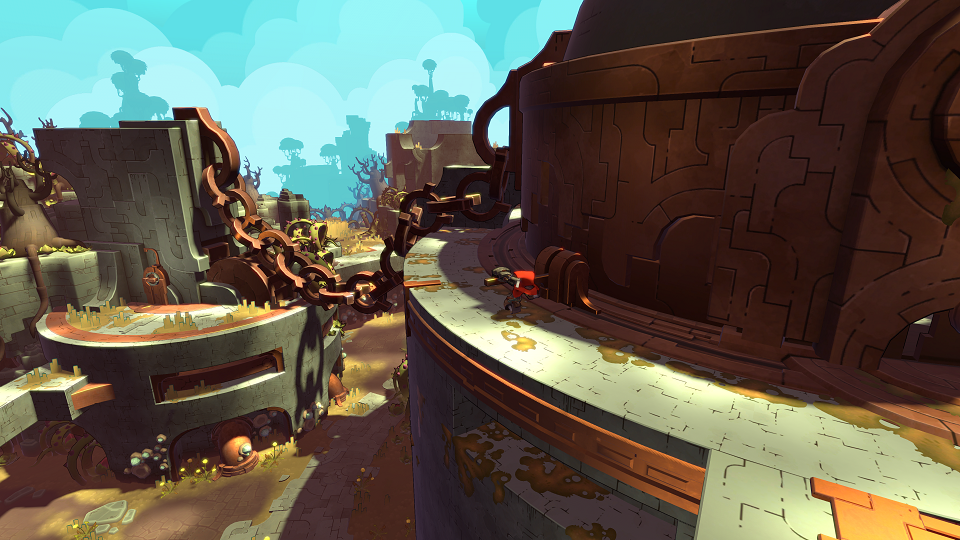 Above: Shape-changing worlds give Hob a distinctive visual style.

While the core art style and gameplay direction for Hob were set, plenty of zones still needed fleshing out and creatures designed to populate those areas. The creation of those assets involves collaboration between numerous disciplines both within the art group—character artists and animators—and with level designers and programmers. "I look at everything we have in the game, and then, narratively, ask how it fits into the ecosystem," says Ness. "Then, I look at what level it's going to inhabit, and how we integrate the character here."

For Ness, establishing a backstory to a creature is vital to informing its design. "We have some monsters made of parts of other creatures, so myself and the character artist come up with a side story where the monsters have gone into this tribal mentality, plotted their land, and to mark their territory they've ripped up other smaller robots and adorned their bodies with their parts," she says. These decisions and details may not necessarily be visible to the player, but in the process of crafting a cohesive world style that follows themes and rules, they are vital for ensuring consistency.

These narratives are then blended with gameplay details from the level designers who require certain weapon and attack types to form fluid challenges within a level. Coordinating with other disciplines across the studio is vital when the artistic style may potentially clash or cause problems with a practical aspect, such as those bolted-on pieces around a shoulder that may cause a clipping problem if the creature were to animate with its arm raised above its head.

With the art reference, narrative influence, and level design influence in the melting pot, the ideas percolate and the iterations begin. "That involves pages and pages of sketches (depending on time frame)," says Ness. "The pipeline can be a couple weeks or couple of hours," she adds, depending on where the project is in its production cycle. After that iterative process, and input from others, Ness provides material allocations and sends it on its way to the 3D modelers. 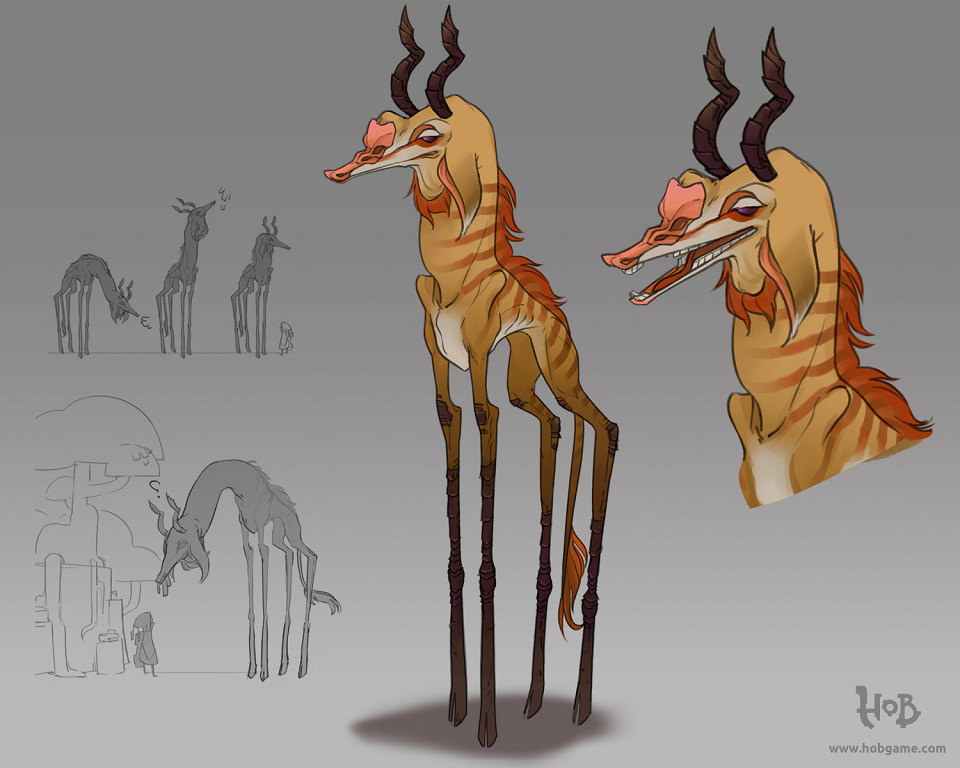 Above: Concepts and detail of the Stilt Horse.

A challenge for any creative, in particular concept artists, is that despite the iterative process, it can be easy to become attached to a particular shape, idea, or construct. A mental separation is needed to manage expectations, both personal and professional.

"There's a saying for concept artists," says Ness, "to not make anything too precious. Don't pitch your babies…because you'll have to kill them!"

The advice is to save the precious work for personal projects where you have full creative control. Of course, despite the rules, it's still easy to get attached, and important to know how to find professional wins in a tight group where those 23 other opinions can all compete for attention. "Fortunately, at Runic we have two full-time concept artists, so if there are 23 inputs, the two of us can confer to get to the right answer," says Ness.

That tight team dynamic does afford the artists a distinct degree of agency in the creative process. "We can pitch things or add things where nobody bats an eye, where at other studios we might have to go through many other processes," says Ness.

For the Stilt Horse creature Ness had creative freedom, connection, and then the professional win of witnessing the audience react positively to her creation. "I saw people in our Discord saying 'I love the giraffe horse' and that's great when I see that players are responding to the things I've created," she says.

That creation came out of a level designer wanting a large creature that wasn't going to aggro Hob (unless repeatedly attacked). "I pulled from comics I read, and watching Miyazaki movies that feature large, gentle creatures that people latch on to," says Ness. Inspirations can come from almost any source, molded to fit the requirements of the level or game design.

It has all led to a final push to the end of production, where the concept artist's responsibilities shift to late-stage UI work and even producing marketing materials such as swag for events like PAX. Those events serve as a reminder that people are going to play Hob, and will uncover many of its levels and secrets not revealed in any videos or playthroughs, and as a sounding board on the progress made so far.

"We listen to everyone," says Russell of these fan interactions, "but always remember that we're working towards a goal, which is shipping a game at the end of the day."