By Fredrick Odhiambo and Dmitry Kazakov

Krita is a professional, FREE, and open source painting program. It is made by artists that want to see affordable art tools for everyone.

"Now I can paint with twice and even three times bigger brushes! Which actually means performance is about 5–10 times better." Rad (Igor Wect), Krita* artist.

Computer processing demands have grown and become more complex and intensive. Software applications demand more compute resources. This has led to software performance bottlenecks and unreliable software services, which lead to a poor user experience, and may eventually turn into complete rejection of an application by its users. Multicore refers to a single physical processor packaged into a single integrated circuit, which contains two or more processing units attached for simultaneous processing of multiple tasks, resulting in enhanced performance and reduced power consumption. Intel® Hyper-Threading Technology (Intel® HT Technology), which is available on the latest Intel Core™ vPro™ processors, the Intel Core™ processor family, the Intel Core™ m processor family, and the Intel® Xeon® processor family is a technology that allows a single microprocessor to act like two separate processors to the operating system and to the application program. This white paper highlights how the Krita application combines multicore and Intel HT Technology to improve the application’s performance and the overall user experience of Krita. Krita software developers used Intel VTune™ Amplifier to analyze Krita use cases that had been previously identified by Krita users as use cases that required improvement. The VTune Amplifier enabled quick identification of concurrency. These issues were resolved mostly through multithreading and thread synchronization techniques. An improved version of Krita was built and the aforementioned use cases were re-tested for performance gain. The results collected show a measurable performance gain of upto 2X on the different system configurations. System configuration information is included in a later section of this paper.

Krita gathered application usage complaints and issues using Bugzilla on https://bugs.kde.org/. On this online forum, artists and other users report their challenges and pain points from their real-world experiences of using Krita application as far as user experience is concerned. Among the issues raised, slow brush speeds featured prominently and Krita asked issue authors additional questions i.e. system settings to enable them define and de-limit the issue more concretely. From multiple issues raised, two use cases were prioritized: Brushes and Animation rendering.

Using the VTune Amplifier, Concurrency and Hotspot Analysis on affected use cases were done for establishing an in-depth view of performance issues. These issues were resolved through rewriting code, changing libraries, incorporating Intel® Advanced Vector Extensions (Intel® AVX) for Fused Multiply Add instructions, and multithreading the use cases as much as possible. This resulted in development of Krita version 4.0.0, which takes advantage of multicore and Intel HT Technology to improve application performance.

The VTune Amplifier was used to profile Krita application performance. In-depth Concurrency and Basic Hotspot Analysis were reviewed to establish performance issues in the two use cases of importance (brush painting and animation rendering). The following issues were established.

Each frame was being rendered sequentially in almost single thread. After initial profiling by the VTune Amplifier (Concurrency and Waits benchmarks), two issues both related to usage of mutexes were located:

Issue 1: Tiles hash table. All the image data in Krita is represented in a form of 256 by 256 pixel tiles, which are stored in hash tables. Each pixel layer has a hash table containing all the tiles dedicated to the layer, and each hash table is guarded by its own read-write lock (QReadWriteLock). According to the VTune Amplifier profiling results, up to 40 percent of the time was spent waiting on these locks.

Issue 2: The Krita application internal scheduler also had a bottleneck. The tasks in the scheduler are represented as QRunnable objects running on a QThreadPool pool. It was established that QRunnable-based tasks are too small, and there is high probability of the thread going to sleep just after one task is completed and before the next one is started, so the tasks were aggregated in bunches. Now each QRunnable-based task can pull extra tasks from the scheduler, therefore avoiding any sleeps.

These two fixes significantly improved the Krita rendering engine and it showed almost linear speed scaling, up to six physical cores. When adding more cores, the mutexes start to show up again. To ensure Krita scales well on higher CPU core numbers, there were two options—either rewrite the hash table in a lock-free manner or use more high-level methods of multithreading. The second approach was chosen.

Tiles Hash table issue was resolved by the usage of two-phase locking inside the hash table (KisTileHashTableTraits<T>::getTileLazy()). At first an attempt to fetch the tile without any lock held (KisTileHashTableTraits<T>::getTileMinefieldWalk()), and only if this process fails,  the lock is taken and the process is repeated. Such trick is thread-safe because of two reasons: thread-safe shared pointers are used inside the hash table (so in the worst case the thread will just read outdated data) and the high level scheduler guarantees that two threads will never try to read +write to the same pixel of the image (it means that the tile cannot be deleted while some other thread is still accessing it). Such two-phase locking significantly reduced the contention over the lock.

When saving animation video clip, all frames need to be rendered and saved into separate files. Technically, each frame represents a different version of the same image, but with its own pixel data. Therefore different frames cannot be rendered on the same image at the same time. But copies of the image can be made! If each copy is passed to its own thread, the rendering processes will be fully independent!

A possibility of making shallow copies of the image was implemented. When creating a shallow copy, most of the pixel data becomes shared between the two images. No extra memory is needed except for the temporary "projections" used for rendering. A tests on a huge animation file was done by a professional animator, which occupies about 7.2 GB of RAM when fully loaded. Making a shallow copy of such image takes only about 200MB extra RAM. Regular user’s files demand even less extra memory. Even though shallow copies don’t occupy too much extra memory, it still takes a bit of time to create them. A trade off was considered: not creating a dedicated copy for each core, but create a few copies and assign each copy to several cores. E.g. in a scenario whereby we have 6+6 cores, create 4 shallow copies and assign each copy to 5  threads. In the result, CPU is utilized almost to 100% by making 12 threads and run almost without interdependencies.

The brushes’ painting was inherently a sequential algorithm. The brush itself is just a set of small, round images (called dabs), which are painted one by one along the stroke line with small offsets. The situation is even more complicated, because some of the dabs could have dependencies between each other: two dabs can use the same base dab, but apply different post-processing to it.

The solution for the problem consists of two parts:

Together with rendering core optimizations, this work guarantees that the brushes now scale nicely, up to 6 physical cores.

An interesting observation was made on the most responsive brush (Basic_tip_default), which utilizes Intel AVX technology for vectorized calculations. After all the optimizations were done, it became so fast that it almost hit the ceiling of the memory throughput (according to the VTune Amplifier, when painting with a 1000 px brush on a 5k canvas).

After implementing the solutions above, results were collected after benchmarking tests were done on two systems with system configurations below.

The following data depicts time taken in milliseconds for frame generation (animation rendering pre-step) on different cores. This was achieved by enabling cores on the machine in an incremental fashion. Frames generation duration significantly determines animation rendering time in Krita.

Note: The animation file used for the test is from Wolthera Van Hovell (A top Krita artist), https://yadi.sk/d/n9a6YRrP3Lc3Ts. 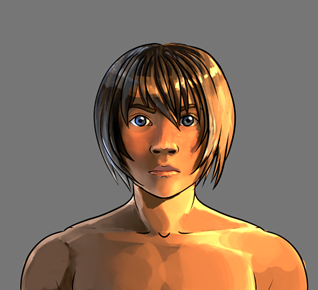 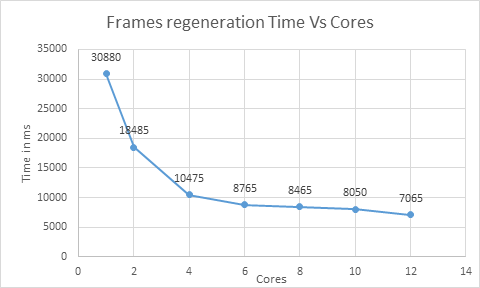 For reliability, an automated script was developed and executed on different core numbers in the two afore-mentioned systems, the script logged the brush speeds. The table below shows time spent to render 16 5000-px long strokes with the Gaussian brush of 1000px diameter. As the core number increases, the time spent on rendering reduces (brush speed increases). 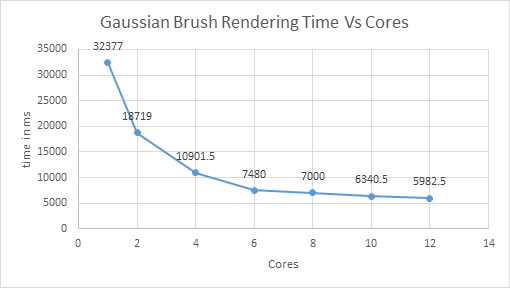 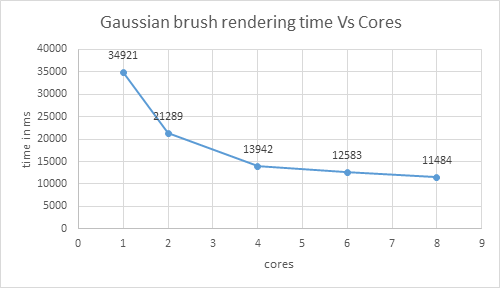 From the two use cases above, multiple cores and Intel HT Technology significantly improve the performance of processor-intensive computations. A performance gain of 4.37X is achieved when an animation is rendered using all cores in a 6Core system with Intel HT Technology turned on, compared to rendering the animation on one core. This visible and measurable performance gain translates to reduced waiting times by Krita application users, thus increasing their overall productivity.

Intel provides technologies and hardware platforms that meet the ever-growing computer processing demands by software applications. Independent software developers can take advantage of these capabilities by writing multithreaded software which, in turn, offers an excellent user experience to the application users. Different tools are provided by Intel to software developers that could be used to determine software application performance bottlenecks, hotspots, and concurrency issues. An example of such a tool, and which was used in this study, is the Intel VTune Amplifier.