The original article is published by Intel® Game Dev on VentureBeat: Collidalot: The car-smashing-exploding game that looks straight out of Mad Max. Get more game dev news and related topics from Intel on VentureBeat. 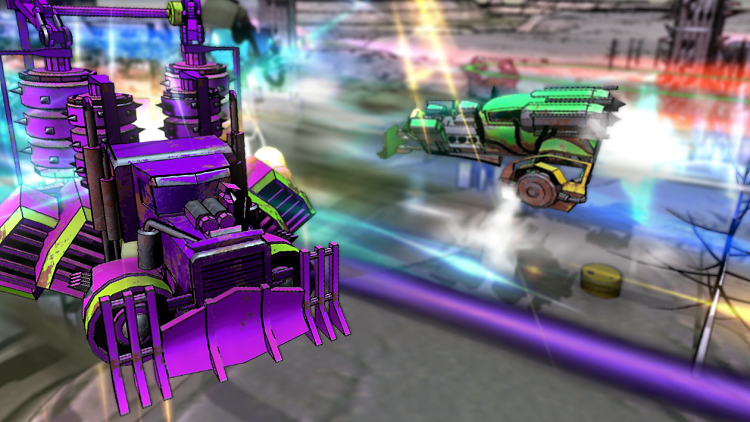 Grunka Munka Games has an easy way of remembering its birthday: July 11, or as it’s known among 7-Eleven* aficionados, Free Slurpee Day.

Cofounders Andrew Ward and Matt VanCompernolle fondly recall going out and getting their frozen treats when they founded the studio in 2017. While the date was just a happy coincidence, it marked an early but important step in their budding game industry careers. In just a few short years, they went from being college students at the Academy of Interactive Entertainment (AIE) in Seattle to full-time developers.

“Our goal is to find ideas that aren’t commonplace in the industry right now, that are actually fun to interact with, and make games off of that,” said VanCompernolle. “So for Collidalot, it’s ships slamming into each other and grinding on rails. And that combination specifically is really unique in the games space right now.”

Out now for the Nintendo* Switch, Collidalot is a colorful multiplayer game that’s half demolition derby and half Tony Hawk’s Pro Skater. Set in a post-apocalyptic future, the goal is to knock your opponents’ ships outside the screen by violently smashing into them or using your vehicle’s unique abilities. To avoid your own fiery death, you have to grind on a series of rails to stay within the arena’s boundaries.

Collidalot began as one of Ward’s and VanCompernolle’s student projects, a prototype they developed during their first year at AIE. They always knew they wanted to make a local multiplayer game (the Nintendo Switch’s portability made it the perfect platform to debut on). But it took them a while to nail down the game’s feel and style — and they’re grateful they were able to do it within the safe confines of the school.

Unlike other colleges, AIE doesn’t assign students homework or tests. Instead, they work on projects during their two-year program. Ward described it as being more like an office than a traditional classroom, one where you can earn a lot of practical experience.

“When we were starting development, we were very focused on the idea that the most productive thing that we could do at this early stage in our careers is complete and ship a game,” he said. “So instead of just making a student project or something that isn’t quite a full, complete experience, it would be more valuable for us to spend the time to actually release a game, push it out on our own, and get all the experience that you get from an actual release cycle.” 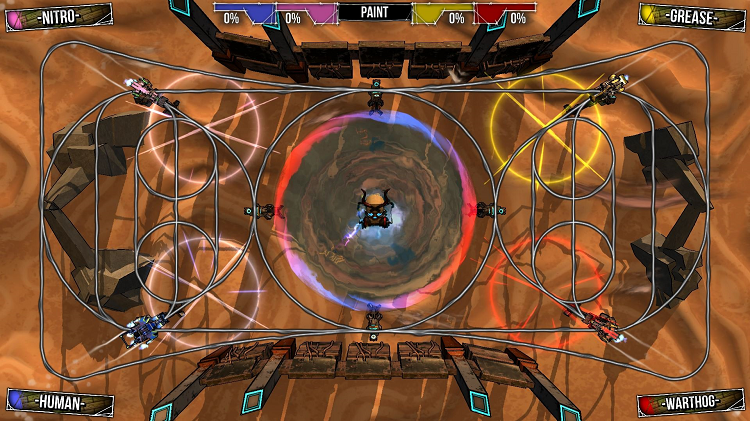 Inspired by the massive warships from the Warhammer 40K sci-fi universe, Ward and his team (made up of a handful of students) set out to make a unique type of brawler. The original prototype for Collidalot was much slower, with big ships trying to push each other out of a circular ring. Ward described it as “spaceship sumo wrestling.”

But they quickly found that the size of the ships made them too unwieldy, especially in such an open space. So they shrunk the vehicles and increased their speed. VanCompernolle also came up with a wild idea about allowing the ships to latch onto the edge of the circle — imagining it like one of Saturn’s rings — as they’re bumped out and pull themselves back in by grinding on the ring via gravity.

The team found the mechanic so fun and rewarding that they added more things to grind on.

“It quickly transformed into a skateboard style grind-on-rails game rather than this open space brawler,” said VanCompernolle.

At the end of their first year at AIE, the team had a solid prototype and even a working title (The Enragement Ring). But it was still a slow, tactical kind of game, and way too difficult for the average person to pick up and play. That summer, they decided to redesign their prototype from the ground up, continuing to work in the computer lab as if class never ended.

With graduation looming, they wanted to make sure they had a finished product they could sell when they were out of school.

However, after showing off The Enragement Ring at multiple places, they were convinced that they needed to make more sweeping changes. During their second year, the students demoed the game at the Seattle Indie Games Competition at Power of Play 2017. The prototype got a lot of positive feedback from attendees, enough to win the Audience Choice Award at the show (as well as an Intel® NUC).

In addition to helping the team finish Collidalot’s development, the Intel® NUC inspired them to create two standalone arcade cabinets for the game — the first of which they showed at PAX 2018. They’re planning on donating both cabinets to the Seattle Children’s Hospital. 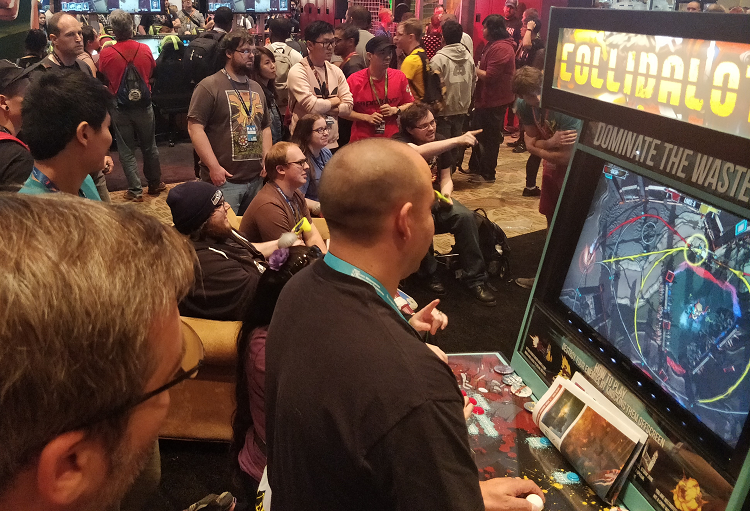 Shortly after Power of Play, Ward uploaded a work-in-progress version that people could play at indie game platform Game Jolt*. But it didn’t catch on online as much as he’d hoped it would. He realized the sci-fi art style was holding them back. It just wasn’t strong or exciting enough.

“I think it was about a month before we graduated that I told my whole team, ‘We need to decide on a new art style within a week, or we’re going to cancel this game because there’s no way that it’s going to sell and nobody’s going to pay any attention to it if it doesn’t look good,’” said Ward.

One of the lead artists came up with an alternative: a grungy, Mad Max-like aesthetic with a lot of skulls, spikes, and vehicular explosions. Satisfied with the results of this change, the team moved forward with the game past graduation, crunching through the summer to make sure it was in a polished state. They established Grunka Munka Games that July, shortly after securing some funding via an incubator program from AIE.

The studio continued working on the newly renamed Collidalot for more than a year, taking it to PAX*, TwitchCon*, and DreamHack* Atlanta before releasing it on Switch in November 2018. Through a combination of luck, hard work, and determination, Ward and his teammates were able to accomplish their original goal of creating and shipping a complete game.

While they plan to add more content to Collidalot in the coming months — including new ships and levels — they’re also starting to think about what Grunka Munka’s next game might look like.

“We’ve already started developing ideas for our next project. We prefer to keep pushing new ideas — that’s really what we want the studio to be about,” said Ward.