The original article is published by Intel Game Dev on VentureBeat*: Blowfish bidding for the big time Get more game dev news and related topics from Intel on VentureBeat. 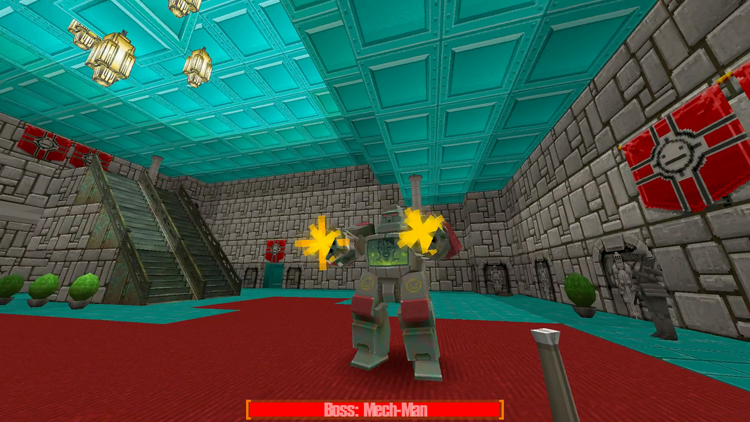 The challenges facing fledgling studios stepping out in the competitive wide world of game development can be daunting when they’re known, terrifying when they are unseen, and plain baffling when the rules are changed on the fly.

For Blowfish Studios, founded by Ben Lee and Aaron Grove in 2010 in Sydney, Australia, witnessing the opening and closing of several studios led to defining their ambition as establishing a “sustainable” indie game studio. As many developers can attest, that is easier said than successfully accomplished.

“You can make quite a lot of money making mobile games and free-to-play, but that’s not really what we wanted to do,” Lee says. “We play all kinds of games, and while we’re 100 percent committed to keeping a sustainable balance between work-for-hire and making our own games, we’re really here to do the latter.”

The studio’s rookie project, Siegecraft*, laid the groundwork as a featured game release with the iPhone* 4S and 5, awareness that ultimately drove it to be a top gaming app on the iPad platform. Of course, for any studio starting out, following the core passion is vital to maintaining commitment to and enthusiasm for the games that require so much mental commitment, and so shifting to PC and beginning work on Gunscape was an important step.

Overseeing their own destiny, the Blowfish team could now focus their talents on building the game that would help boost the studio’s profile and that would make a statement in the competitive PC shooter market.

The team’s commitment to creating their chart-topping iOS title paved the way for the development of Gunscape, a shooter game that blends classic FPS settings and enemies with more recent (but retro-styled) block-based building mechanics. On the face of it, it makes perfect sense: bring Doom to the Minecraft crowd; let the audience be the creators; let everyone share anything they create. 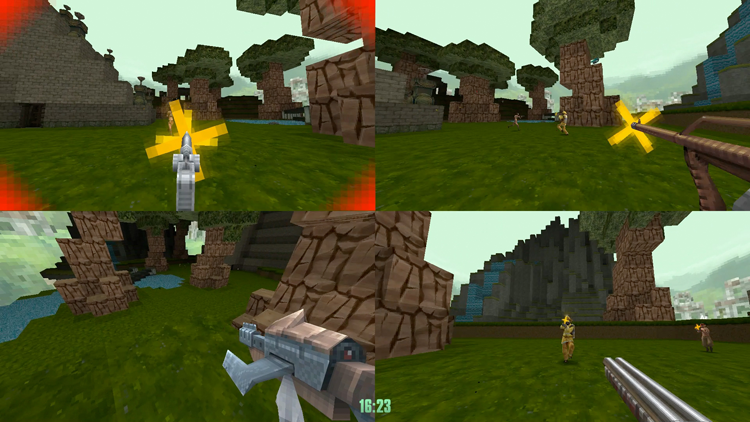 Blowfish crafted the tools and the means to share user-generated content, as well as its own levels that acted as examples of how the game could play out along its blocky, stylized path. The intention (and hope) was that users would embrace the user-friendly tools to craft numerous shooter experiences. Oftentimes in these situations, it works out that 1 percent of the total audience creates the content that the remaining 99 percent consume. Not so with Gunscape as Lee suggests that “most of them” have been involved in map creation to some extent.

Collaborative projects have also helped the community overcome weaknesses in the supplied map design mechanics. Lee freely admits that the omission of timers attached to enemies or map events “was probably an oversight on our part.” But the community solved the shortcoming themselves. Since you can set monster spawns and traps, like darts, though it was never specified in any documentation, darts deal a set amount of damage. Map creators figured out this amount so that they could trigger a trap that spawns a monster and then fires darts at it to kill it over a set number of hits, which then can trigger another event. And so, a Macgyver’d timer system was borne. 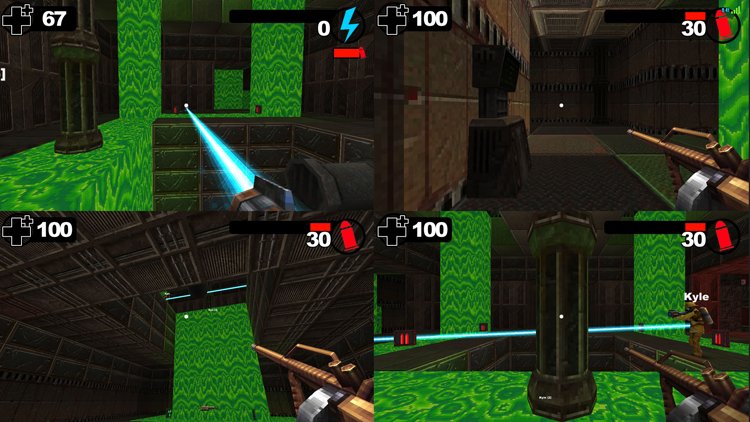 Above: If some level designs look “inspired by” classic FPS games like Wolfenstein 3D, DOOM, and Quake, that’s not by accident.

“It’s a big inspiration for us to keep working on it,” says Lee of the community’s commitment to working with the tools provided. That’s despite Lee admitting the game has not performed financially as well as they had hoped, and hasn’t realized some of the creative goals the team had in mind in the early development phase. “Our initial idea was much grander,” Lee says, “so that it would become a RPG, so people could create those games as well.”

This has fed into the desire to maintain support for the community and the project as it was initially envisaged. “We still get people in, and they say they love it, so we want to keep investing in it,” says Lee. And it’s not like any of these efforts will be wasted as the development of the underlying technologies are being crafted so that they can be used in other projects “so it’s not like something we do now won’t ever be used again,” Lee adds.

Building for the future

Success can clearly be measured in multiple ways. Keeping the lights on—“maintaining sustainability”—can be a core goal, but it also presents opportunity. For Blowfish that emerges from the interns who have gravitated from entry positions to full-time roles. With over half the staff freshly out of game colleges, it shouldn’t be a stretch to consider their position a little precarious.

But that’s the point for Blowfish. Not only has this renegade group of executives been backed by straight-outa-college enthusiasts, but the results have been….sustainable.

While the trajectory is clear to the founders, gamers still need to peel the shell that reveals the map that tells a story that matters. And it doesn’t matter whether it comes from an intern, a noob, or an executive, the only criteria that counts among iOS and general PC releases is that the best game wins.