The original article is published by Intel Game Dev on VentureBeat*: A boy and his giraffe: A random drawing inspires an award-winning game. Get more game dev news and related topics from Intel on VentureBeat. 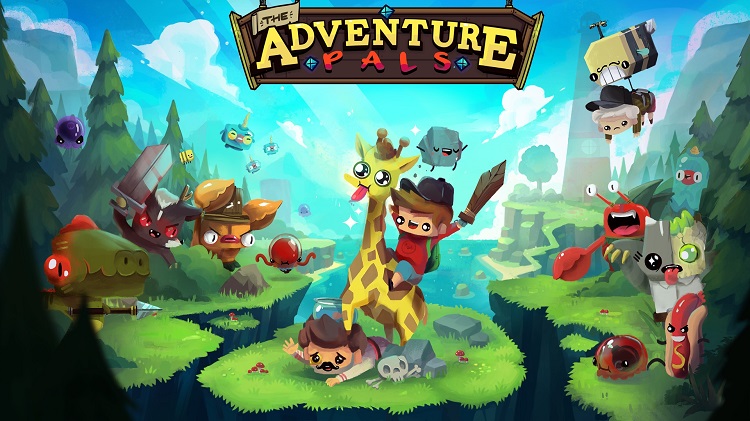 Platforming games have a strong track record of producing memorable characters. Millions around the world can instantly recognize Mario's cherubic nose and mustache, or Sonic the Hedgehog's triangular spines. In The Adventure Pals, the hero's most distinguishing feature might just be Sparkles, a pet giraffe who lives inside his backpack.

The quirky character is a good indicator of the off-the-wall humor you'll find in Massive Monster's upcoming game. The kid and his giraffe are on a quest to rescue his father from the evil Mr. B, who is inexplicably transforming all the old people into giant hotdogs. The silly premise feels like a throwback to ‘90s-era platformers, but one that incorporates the style and flair found in today's popular cartoons.

It's one of the reasons why the judges at this year's Intel® Level Up Game Developer Contest gave The Adventure Pals their Best Character Design award. Fittingly, the idea for the game started with a drawing.

A few years ago, artist Julian Wilton posted an illustration of a boy and his giraffe in an online forum. Jay Armstrong, a programmer at Massive Monster, liked it so much that he wanted to team up with Wilton to make a game based on his artwork.

"It was a really bad way to design a game," Wilton joked. "I was like, ‘I want to make this into a game.' And Jay had made some platformers in the past. I don't think we had any strong ideas of what the game would be."

Inspired by indie hits like Castle Crashers and Super Chibi Knight, the two of them eventually figured it out. In 2012, they released Super Adventure Pals. It was a free browser game hosted on the Armor Games website, which serves as an online library of user-submitted Flash games. Wilton was more than familiar with the popular software: He'd been making his own Flash games since he was 15-years-old. 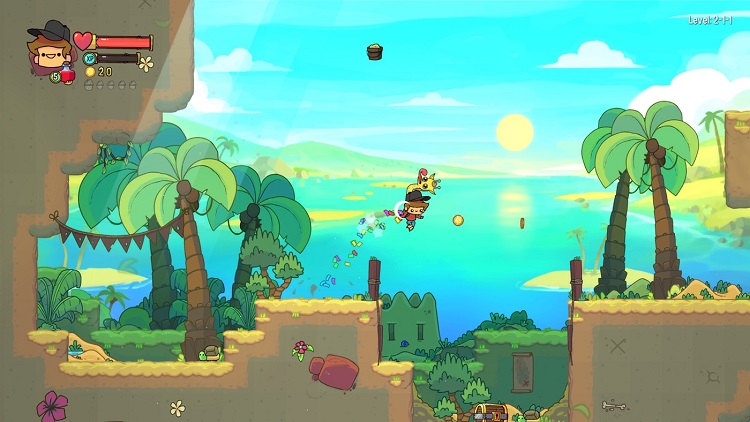 Above: The giraffe can help you cross large gaps with its magical helicopter tongue.

Those early game development experiences had a huge influence on Wilton's art style.

"Back in the day, there was definitely a style associated with Flash games because of the way Flash works — and the programs used to make the games — which I still use today for a lot of things because it's a very easy tool for creating art," he said.

Wilton keeps his designs simple and relatable, pointing out how animated shows like Adventure Time, Over the Garden Wall, and Gravity Falls contrast their relatively basic-looking characters with gorgeously detailed backgrounds. He likes to use a similar aesthetic in his games. Whenever he creates a new character, he uses a thick digital brush to sketch out its silhouette.

"I think that's the most important part of designing a character because that's what the audience is going to see," Wilton said. "I think a lot of people make mistakes when they're doing character stuff, where they might draw a human body and they'll zoom in and add all these details. … But when you zoom out, all that detail is gone. You won't notice it."

You can see that philosophy in action through the screenshots posted on this page. Even though they're bursting with activity, it's easy to identify the boy through his black hat and the dangling giraffe. And the huge, glossy eyes that almost all the characters have immediately tell you that The Adventure Pals doesn't take itself too seriously.

"I guess my design work — the way I do graphic design — probably feeds into my character design as well, where it's about communicating the idea of the character to the audience," said Wilton. 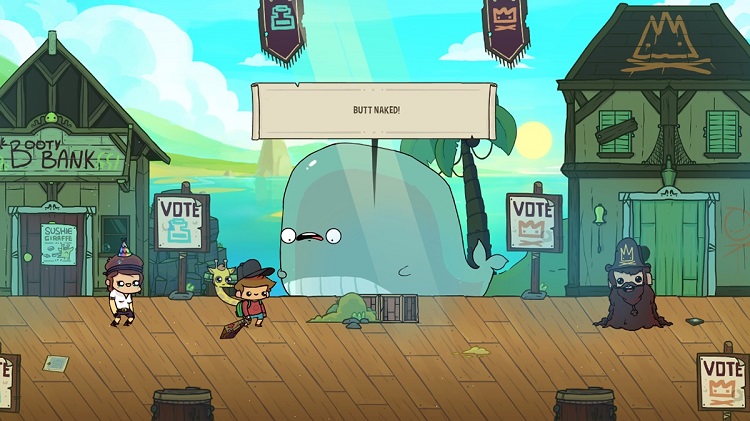 Above: Forget the whale. What the heck is going on with that pirate?

By the end of Super Adventure Pals's development, Wilton and Armstrong learned so much from that experience that they immediately wanted to make a sequel. But at that point, as Wilton said, Flash games "were dying off." So for the next project (at first called Super Adventure Pals 2), Massive Monster decided to make it for PC and consoles.

The developers once again partnered with Armor Games as their publisher, and received additional funding through a Kickstarter campaign they launched in July 2016. In addition to making the game bigger and better than the Flash incarnation, they put more of a focus on the giraffe's movement and combat abilities, such as how it can help the boy hover in the air by spinning its tongue.

The duo also wanted to make sure that the new game could be enjoyed by all kinds of players. They looked at the type of multifaceted humor that Disney movies tend to have: They're fun for kids on a surface level, and adults can appreciate the more mature jokes and themes.

"There aren't too many games that do that. That's where we're trying to position the game," said Wilton.

They also hired a writer to help them shape that humor and expand on the story so that it's more of a coming-of-age tale. But as the game changed, it no longer made sense to keep the original moniker. Wilton and Armstrong thought it'd be better to start with a clean slate.

"At the end of the day, we realized we didn't want to be associated with Super Adventure Pals that much anymore," said Wilton. "Because when we look at it, we're like, ‘That's a piece of s***!' People still love it. But I don't think players are going to come to the game because they played Super Adventure Pals. … The new game is miles ahead of the Flash game."

The Adventure Pals is coming to PlayStation 4, Xbox One, and PC in 2018.