Registers are the closest memory to the arithmetic-logic units (ALUs) in a CPU, so reads and writes to registers are fast. For best performance, programmers should ensure that most of the variables in a routine can be accommodated in these registers. However, the number of registers is limited, so the compiler attempts to generate code for optimal allocation of these registers.

If a routine uses more variables than available registers, some variables may need to be stored and reloaded from the stack. This is known as register spilling. Sometimes it is unavoidable, but you can optimize register use by applying loop optimizations like loop fission when possible. If the compiler optimization report indicates a significant number of spills, this is referred to as a high register pressure performance issue. Recommended optimizations for register pressure include avoiding loop unrolling, loop fission, and having the compiler generate scalar plus vector code. 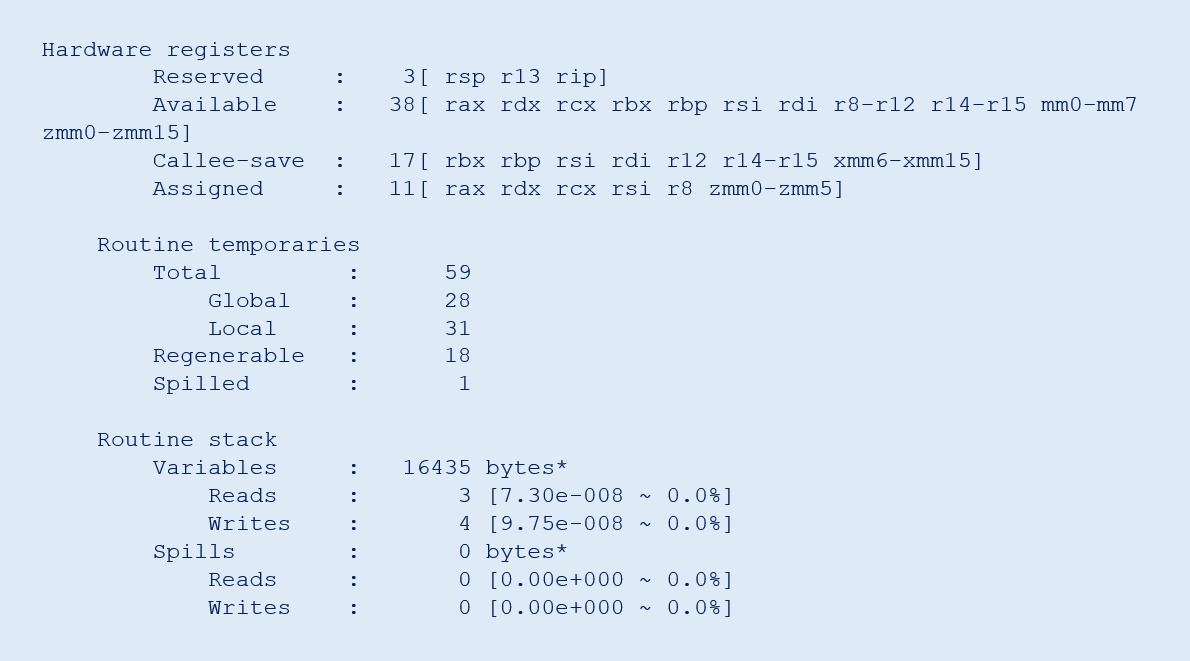 The pseudocode shown in Figure 3 was adapted from a Lattice Boltzmann method (LBM) application. Figures 4 and 5 shows the compiler optimization reports with and without IPO. The compilation units lbm_file1.c and lbm_file2.c contain functions func_grids and func2, respectively. func2 invokes func_grids in a time-step loop.

One of the most common optimizations for better compiler code generation and performance is function inlining. However, it can be done only when the callee (function definition) and caller (invocation) are in a single compilation unit. This is not the case for the LBM example in Figure 3. However, the Intel® compiler can do interprocedural optimization (the -ipo and /Qipo compiler options on Linux and Windows, respectively). As shown in Figure 4, the call to func_grids prevents vectorization of the loop in func2. Using IPO gives the compiler an opportunity to vectorize such loops and function calls by inline optimization (Figure 5).

﻿Figure 3. Example code showing the use of IPO compiler optimization

﻿Figure 4. Compiler optimization reports for each file without IPO

One of the most common compiler optimizations is to inline a called function within the caller. A function is more likely to be inlined if it is smaller in size. The compiler generally tries to limit the “code bloat” caused by inlining, but you can override the compiler’s conservative tendencies by changing the options listed in Figure 6.

Scientific users usually want to maintain high precision in their computations. This is typically accomplished by using 64-bit instead of 32-bit floating-point datatypes. However, using lower precision datatypes when appropriate can improve performance. In addition, compiler optimizations that affect numerical reproducibility and consistency are sometimes prevented using the -fp-model precise option (fp:precise on Windows).

Another speedup opportunity on modern processors is parallelism. The Intel compilers support parallelism when the compiler can determine that it is safe (auto-parallelization) or when the parallelism is expressed using OpenMP (Figure 9). The compiler optimization reports which loops are parallelized when the OpenMP (-qopenmp and /Qopenmp on Linux and Windows, respectively) and auto-parallelization (-parallel and /Qpar on Linux and Windows, respectively) options are used (Figure 10).

Intel compilers provide a rich set of features, performance optimizations, and support for the latest language standards. You are encouraged to try the latest compiler and experience application performance improvements that are possible by changing a few compiler options. The compiler reports and examples shown in this article and previous articles help to understand what the compiler is doing.