This case study evaluates the ability of the TensorFlow* Object Detection API to solve a real-time problem such as traffic light detection. The experiment uses the Microsoft Common Objects in Context (COCO) pre-trained model called Single Shot Multibox Detector MobileNet from the TensorFlow Zoo for transfer learning. Intel® Xeon® processor-based machines were used for the study. At the end of this experiment, we obtained an accurate model that was able to identify the traffic signals at more than 90 percent accuracy.

Traditional approaches in machine learning for traffic light detection and classification are being replaced by deep learning methods to provide state-of-the-art results. However, these methods create various challenges. For example, the distortion or variation in images due to orientation, illumination, and speed fluctuation of vehicles could result in false recognition.

The experiment was implemented using transfer learning of the Microsoft Common Objects in Context (COCO) pre-trained model called Single Shot Multibox Detector (SSD) with MobileNet. A subset of the ImageNet* dataset, which contains traffic lights, was used for further training to improve the performance. For this particular experiment, the entire training and the inferencing was done on an Intel® Xeon® processor. 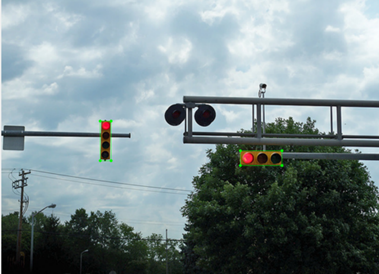 The hardware configuration of Intel Xeon® machine is as follows:: 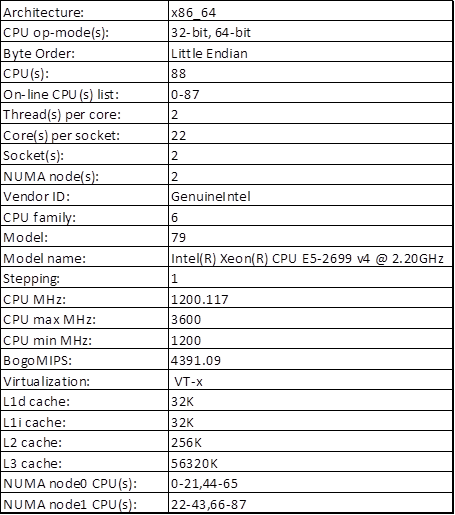 The development of this use case had the following dependencies as shown in Table 2.

TensorFlow can be installed and used with several combinations of development tools and libraries on a variety of platforms. The following are the steps to build and install TensorFlow optimized for Intel® architecture1 with the Intel® Math Kernel Library 2017 on Ubuntu*-based systems.

Download the latest version of LabelImg, an annotation tool for Microsoft Windows*2. Extract the zip file, and then rename the folder as LabelImg.

The solution was implemented with the TensorFlow Object Detection API using Intel architecture. The detection pipeline is given below.

TensorFlow’s Object Detection API is a powerful tool that makes it easy to construct, train, and deploy object detection models3. In most of the cases, training an entire convolutional network from scratch is time consuming and requires large datasets. This problem can be solved by using the advantage of transfer learning with a pre-trained model using the TensorFlow API. Before getting into the technical details of implementing the API, let’s discuss the concept of transfer learning.

Transfer learning is a research problem in machine learning that focuses on storing the knowledge gained from solving one problem and applying it to a different but related problem. Transfer learning can be applied three major ways4:

Fine-tuning the ConvNet: This method is similar to the previous method, but the  difference is that the weights of the pre-trained network are fine-tuned by continuing backpropagation.

Pre-trained models: Since modern ConvNets takes weeks to train from scratch, it is common to see people release their final ConvNet checkpoints for the benefit of others who can use the networks for fine-tuning. For example, TensorFlow Zoo5 is one such place where people share their trained models/checkpoints.

Now let’s look at how to implement the solution. The TensorFlow Object Detection API has a series of steps to follow, as shown in Figure 1. 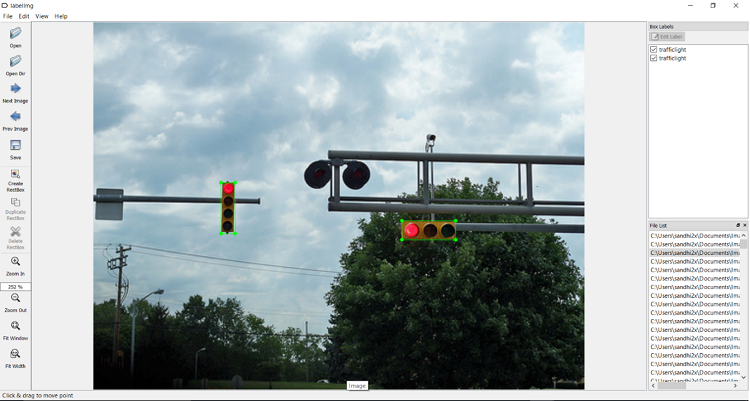 Once the annotations for an image are completed, save the image to any folder.

The corresponding eXtensible Markup Language (XML) files will be generated for each image in the specified folder. XML files contain the coordinates of the bounding boxes, filename, category, and so on for each object within the image. These annotations are the ground truth boxes for comparison. Figure 3 represents the XML file of the corresponding image in Figure 2. 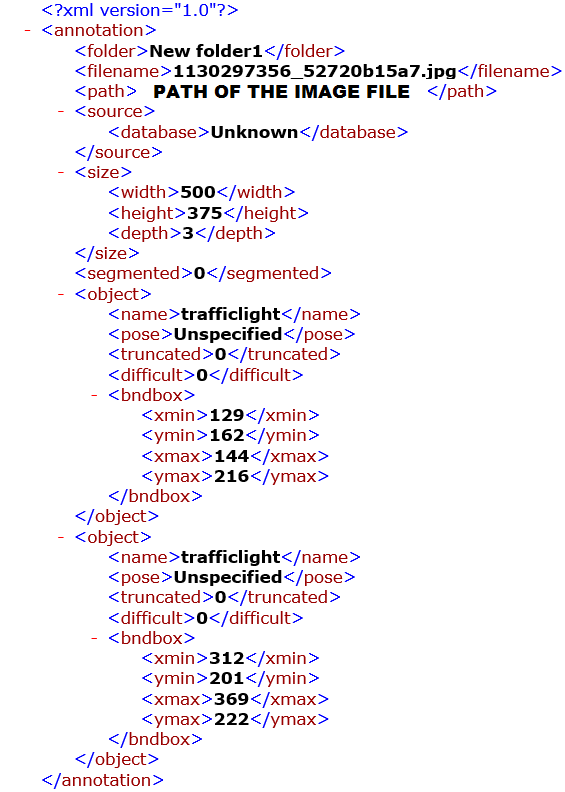 Each dataset requires a label map associated with it, which defines a mapping from string class names to integer class IDs. Label maps should always start from ID 1.

As there is only one class, the label map for this experiment file has the following structure:

TensorFlow accepts inputs in a standard format called a TFRecord file, which is a simple record-oriented binary format. Eighty percent of the input data is used for training and 20 percent is used for testing. The split dataset of images and ground truth boxes are converted to train and test TFRecords. Here, the XML files are converted to csv, and then the TFRecords are created. Sample scripts for generation are available here.

This section discusses the configuration of the hyperparameters, and the path to the model checkpoints, ft. records, and label map. The protosun files are used to configure the training process that has a few major configurations to be modified. A detailed explanation is given in Configuring the Object Detection Training Pipeline. The following are the major settings to be changed for the experiment.

Table 4 depicts the observations of hyperparameter tuning for various trials of batch_size and learning_rate.

The final task is to assemble all that has been configured so far and run the training job (see Figure 4). Once the optimization parameters like OMP_NUM_THREADS, KMP_AFFININTY, and the rest are set, the training file is executed. By default, the training job will continue to run until the user terminates it explicitly. The models will be saved at various checkpoints.

The inferencing video was first converted into frames using MoviePy, a Python* module for video editing. These sets of frames are given to our model trained using transfer learning. After the frames pass through the Object Detection pipeline, the bounding boxes will be drawn on the detected frames. These frames are finally merged to form the inferred video (see Figure 5).

The following detection (see Figures 6 and 7) was obtained when the inference use case was run on a sample YouTube* video available at: https://www.youtube.com/watch?v=BMYsRd7Qq0I 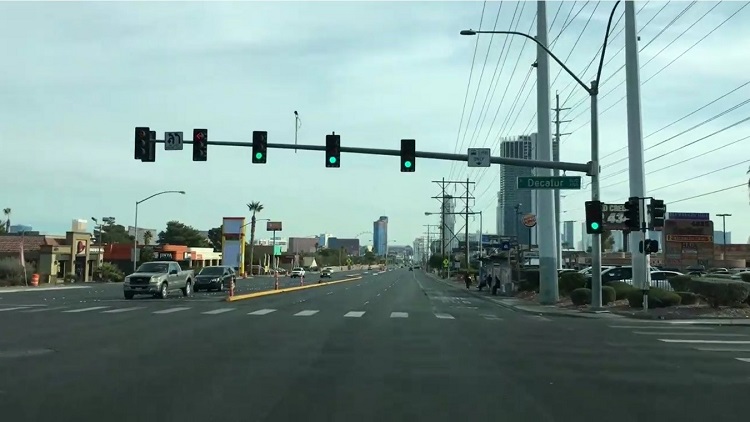 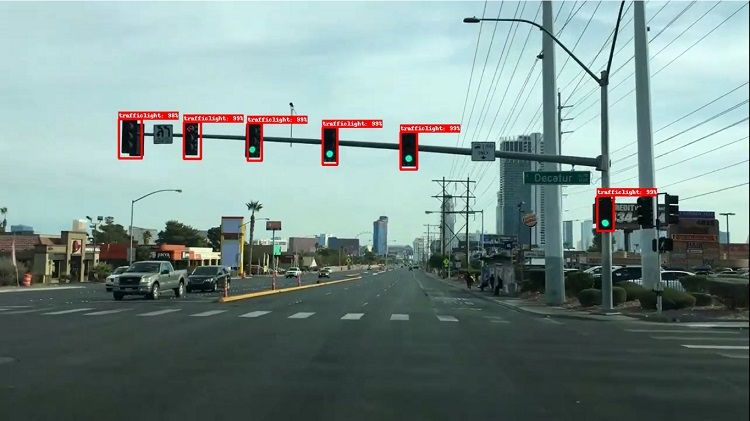 From the results, we observed that the traffic lights were detected with a high level of accuracy. Future work involves parallel inferencing across multiple cores.

Nikhila Haridas and Sandhiya S. are part of an Intel team, working on AI evangelization.