TencentDB for MySQL is designed to provide customers with secure, reliable, high-performance, and easy-to-maintain enterprise-level cloud database services. And Intel® oneAPI DPC++/C++ Compiler can bring Tencent another avenue to get better MySQL performance.

About TencentDB for MySQL

Distributed data storage serves a critical role across a myriad of industries and use cases—internet, finance, and e-commerce. TencentDB for MySQL | Tencent Cloud is a reliable, scalable database hosting service through Tencent, a popular cloud service provider. The application is based on the open-source database MySQL and helps users setup, operate, and expand relational databases in the cloud.

TencentDB for MySQL can be used in different applications and scenarios for a variety of purposes. However, no matter which scenarios it is applied to, a common challenge is that with increasing of storage and data processing requirements, performance requirements for MySQL were also increasing. Therefore, optimizing for higher MySQL performance is critical to meet ongoing business and customer needs.

The Intel oneAPI DPC++/C++ compiler is used for parallel programming applications and delivers productivity and performance across CPUs and accelerators. The following are details on how using the compiler combining link-time optimization (LTO) and profile-guided (PGO) methods helped Tencent build a high-performance MySQL.

In LTO implemented by GCC or LLVM, the compiler can dump its intermediate representation (GIMPLE bytecode or LLVM bit code) to disk to compose a single executable, making it possible for all the different compilation units to be optimized as a single module. This extends the scope of intraprocedural optimization (IPO) to cover the entire program (everything visible when linking). With LTO, the compiler can apply various forms of IPO to the entire program, allowing for deeper analysis, more optimization, and ultimately better program performance. LTO can use digest-based global program analysis optimization, cross-module optimization, and other technologies to better guide optimizations such as function in lining and useless code deletion, among others. LTO can also speed up secondary compilation through Link cache and reduce code size to gain performance advantage.

PGO improves application performance by shrinking code size, reducing branch mispredictions, and reorganizing code layout to reduce instruction-cache problems. PGO provides information to the compiler about areas of an application that are most frequently executed. By knowing these areas, the compiler can be more selective and specific in optimizing the application.

MySQL performance is affected by many factors, one of which is its configuration. Different configurations may have a different impact on performance. Tencent used a configuration file, and built MySQL, both with LTO and PGO, and evaluated the performance with Sysbench. The QPS performance of oltp_read_write.lua is shown in Figure 1. 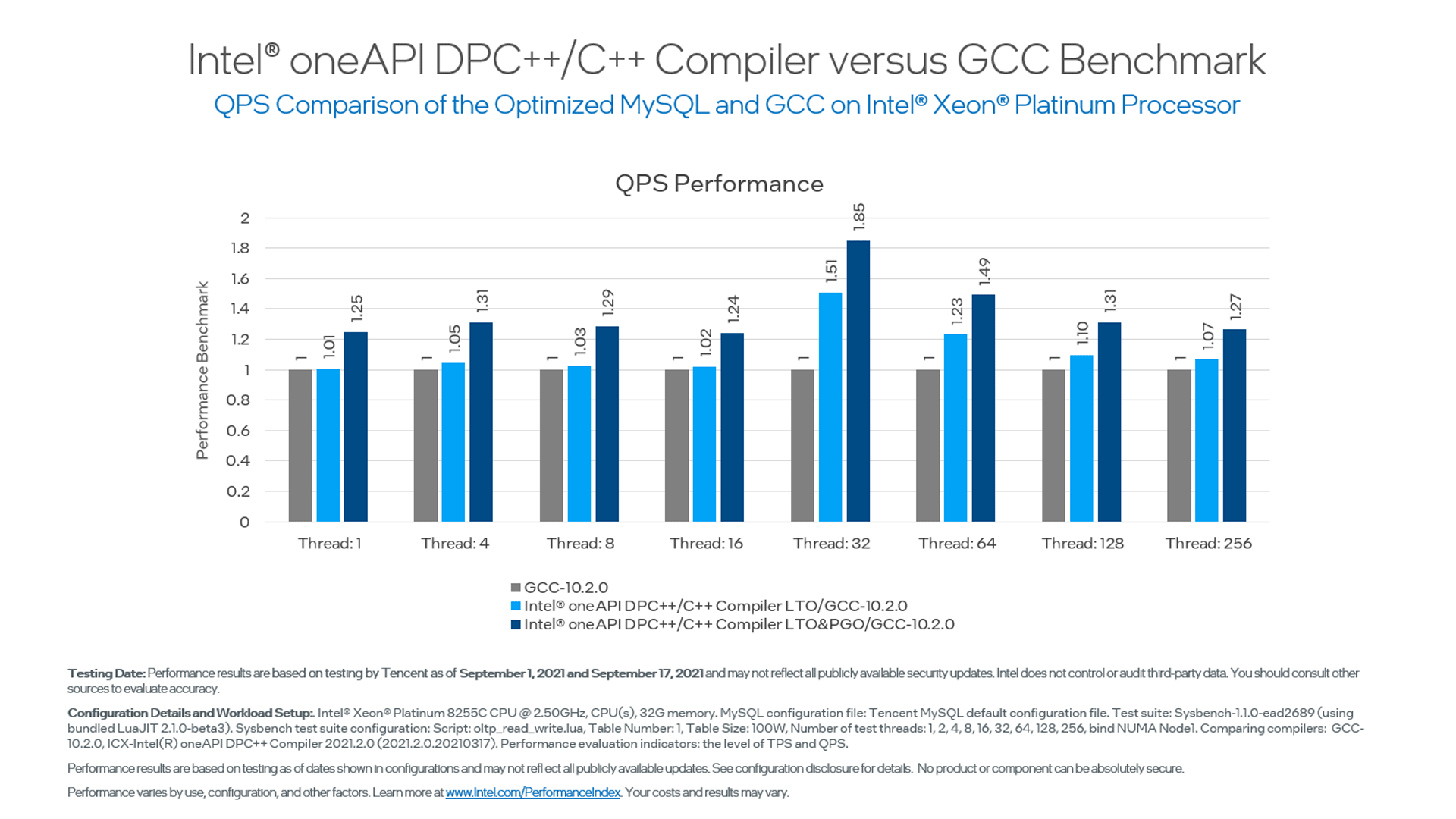 Intel® VTune™ Profiler (VTune) is an advanced performance analysis tool to optimize application performance, system performance, and system configuration for HPC, cloud, IoT, media, storage, and more on Intel CPUs, GPUs and FPGAs. It is part of the Intel oneAPI Base Toolkit, and has many important analysis types, such as hot spots analysis, and microarchitecture exploration.

To understand how LTO and PGO can help MySQL optimization, we used VTune to collect the performance of MySQL based on the default configuration. Hot spot analysis can help users understand an application flow and identify sections of code that get a lot of execution time. Hot spot analysis does not by default capture the function call stacks, so to analyze the stacks, we select the “Collect stacks” option explicitly

Figure 2. Hot spots for the MySQL without optimization shown in Intel VTune Profiler.

For example, Figure 2 displays the hot spots of unoptimized MySQL, the left part shows the hot spot functions, and the right part shows the call stacks of function log_wait_for_flush (log_t const&, unsigned long, bool*)::$_5::operator() which is a lambda function in function log_wait_for_flush, the source code is shown in Figure 3, line 861. Then the lambda function is called by function os_event_wait_for, as shown in line 890. 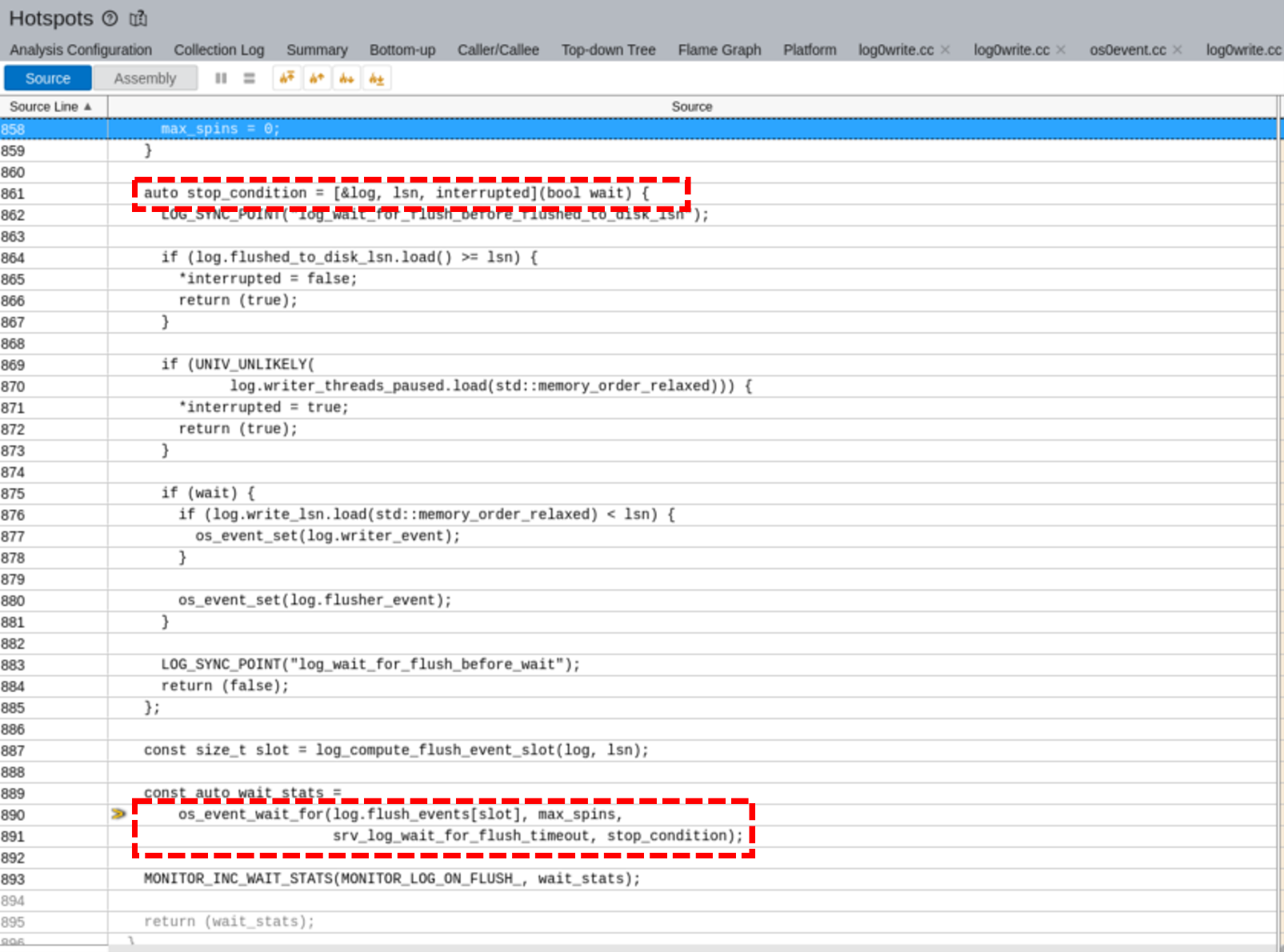 Figure 4. Hotspots for the MySQL with LTO and PGO optimization.

Maximizing performance is essential for TencentDB MySQL applications. There are many approaches to improve MySQL performance, such as using higher performance hardware, high-speed storage, optimizing MySQL's source code, etc. This article optimizes the performance from the perspective of the compiler, adopting the Intel® oneAPI DPC++/C++ Compiler, and combining the LTO and PGO methods to build a high-performance MySQL.