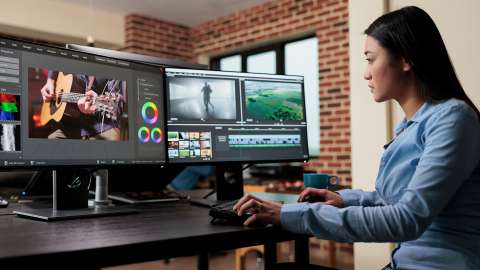 What is a Workstation?

Professionals working on mission-critical projects in industries such as media and entertainment, software engineering, scientific research, and financial services need a system they can count on when it matters most. Workstations provide out-of-box reliability, optimized performance, and the expandability and flexibility required to deliver vital business outcomes for the workloads of today and tomorrow’s growth.

Professionals working on mission-critical projects in industries such as media and entertainment, software engineering, scientific research, and financial services need a system they can count on when it matters most. Workstations provide out-of-box reliability, optimized performance, and the expandability and flexibility required to deliver vital business outcomes for the workloads of today and tomorrow’s growth.

What Does a Workstation Do?

From architecture and engineering to media and entertainment to data science, professionals across industries are doing revolutionary work—creating complex CAD models, animating 2D and 3D graphics, and developing artificial intelligence (AI) algorithms. Accomplishing this innovative work requires the use of resource-intensive user applications and workloads that only purpose-built workstations can handle.

Workstations are mobile computers, stationary towers, or rackmount systems that are specifically designed and configured to meet the most demanding professional workloads and workflows.

Features of a Workstation

While workstations may look like typical business or consumer computers, they are far from it. What sets workstations apart from standard PCs is a set of defining features related to performance, reliability, data integrity, scalability, and expandability.

For power users, waiting for their workstation to complete time-bound tasks, such as media rendering, can bring production and productivity to a grinding halt. Workstations must offer a higher level of multithreaded performance than standard PCs with powerful processors that can handle data-intensive applications and workloads. Workstations built on Intel® Core™ or Intel® Xeon® processors enable users to complete their tasks faster across both single- and multithreaded workloads.

Business growth often means creatives, engineers, and other professionals must handle more-complex workloads and access more-data-intensive applications. Workstation performance must scale appropriately to meet these increasing workload demands. Intel® Core™ or Intel® Xeon® processors enable in-socket upgrades—from eight to 28 cores per socket—to drastically improve workstation performance. If you anticipate a decent amount of business growth in the near future, investing in workstations with CPUs that offer multiple cores is a smart, proactive choice.

In some industries that use workstations, such as finance and data science, data corruption can significantly impact business operations. Data corruption can occur when data stored in memory flips between a 1 or a 0 spontaneously due to thermal or ionizing radiation. When these data or memory errors occur without correction, it can result in bad data or losing weeks’ worth of work and make employee productivity plummet. By investing in workstations with support for error correcting code (ECC) memory1 and reliability, availability, and serviceability (RAS) technologies, users and IT departments can greatly mitigate risks to data and increase system availability.

When working on data-intense workflows or mission-critical projects, users need to be confident the workstation they are using is highly reliable and the platform software is optimized, certified, and guaranteed to perform as expected. Workstations with OEM-secured system certifications from leading industry software companies can help ensure compatibility and reliability of systems.

Technologies in a Workstation

Workstations are available in three different form factors—as a mobile laptop, a desktop tower, or a rackmount system. Despite being sold by a variety of OEMs, such as Dell, Lenovo, and HP, workstations typically feature the same portfolio of technologies.

Processors are an important—if not the most important—workstation technology. What sets a workstation apart from a standard PC is the higher performance it provides users, which ultimately is determined by the processor. With powerful processors, such as Intel® Core™ and Intel® Xeon® processors, workstations can handle the most data-intensive applications and workloads like rendering, video encoding, and code compiling.

ECC1 memory helps keep systems up and running by detecting and correcting memory errors, called bit flips. When bit flips aren’t detected, they can cause catastrophic system crashes and data corruption, resulting in hour or days of lost productivity for users. Not long ago, bit flips weren’t well understood. However, today we understand what they are and how they happen. Bit flips—when a 0 spontaneously turns into a 1, or vice versa—are caused by environmental factors, such as cosmic rays, and occur when data is being stored in memory. ECC memory is included on all Intel® technology-based workstations to increase data integrity and deliver a more stable platform.1

The graphics processing unit, or GPU, has become one of the most important types of computing technology. GPUs can process many pieces of data simultaneously, making them especially useful for the demanding and critical workloads handled by workstations.

There are two types of GPUs: integrated and discrete. An integrated GPU does not come on its own separate card and is instead embedded alongside the CPU. A discrete GPU is a distinct chip that is mounted on its own circuit board and is typically attached to a PCI Express slot.

Some GPUs on the market today are designed primarily for use in workstations, like the Intel® Arc™ Pro A-Series. With built-in ray tracing hardware, machine learning capabilities, and AV1 hardware encoding acceleration, the Intel® Arc™ Pro series GPUs are designed to handle the powerful apps today’s professionals use for AI tasks or rich content creation.

Today’s professionals expect a lot out of their workstations, including reliability, software compatibility, and optimized performance. Ensuring a workstation is ISV certified is one of the best ways to assure users their system will function and perform as intended. While ISV certifications are not a technology, they are an important technology designation because they help provide proof that systems have been tested to ensure software applications are compatible with the hardware, and reliability is guaranteed out of the box. Workstation manufacturers work directly with key industry ISVs for application-specific certification and to help ensure out-of-box reliability and optimized performance for running complex 3D, CAD, and media content creation applications.

Technology and data applications will only continue to evolve in today’s ever-changing industries. This means professionals will inevitably need even better performing workstations that can easily address more complex and data-intensive workloads and workflows. Workstations will also need to have flexibility and expandability to keep up with changing user demands. Workstations based on Intel® processors offer a powerful, reliable, manageable, and future-ready platform that can handle both today’s and tomorrow’s resource-hungry apps. We work closely with our OEM partners to deliver workstations across the world that are expertly engineered and optimized for performance and help users improve their work.

See which technologies and features help meet the needs of today’s and tomorrow’s resource-intensive user applications and workloads.

Learn how to tackle your most demanding workloads with 12th Gen Intel® Core™ processors.

A workstation is a computer that’s specifically designed and configured to meet the needs of professional users. There are several specific features that make workstations different from other consumer or business PCs. These features include workstation-specific branding, high power and performance, reliability, data integrity, scalability, and expandability. All six features must be present for a system to be considered a workstation.

Workstations can do a variety of tasks across many industries. Ultimately, what a workstation is used for is highly reliant on whatever business outcomes the user aims to deliver. From content creation and virtual reality development to simulation programs and 8K video editing, workstations can do it all.

1Workstation brands include the Dell Precision, Z by HP, Lenovo ThinkStation and ThinkPad P, and brands created by premium system integrators.
2Available on select CPU SKUs when paired with the W680 PCH. ECC routing supported in 4L for all DDR4 and DDR5 configurations.
3All RAS features in this article, unless noted, are available in processors that support Standard RAS. The RAS features listed here are not comprehensive. Refer to the platform snapshot for the full RAS feature list.
4RAS only available on Intel® Xeon® W-2000 and W-3000 processors.