This paper proposes solutions for accessing RPMEM based on traditional RDMA. These solutions have been implemented in the Persistent Memory Development Kit (PMDK) librpmem library. Before you read this final part, which describes how to use PMDK-based libraries to replicate persistent memory, we suggest first reading Part 3: RDMA Enabling for Data Replication. The other parts in this series include: 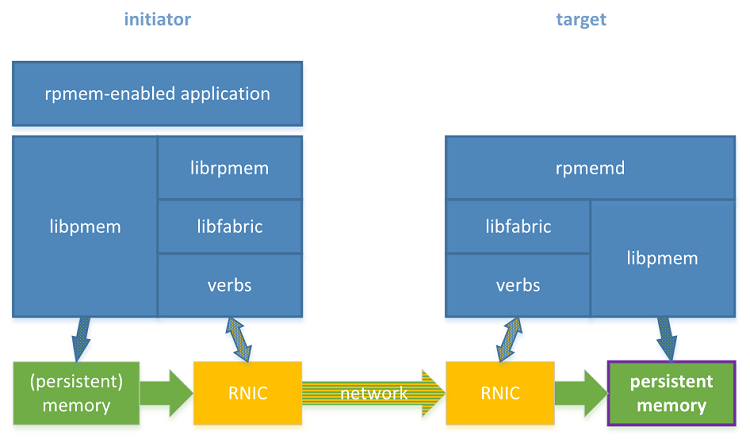 This section describes how to emulate the persistent memory in software and how to configure it for rpmem replication.

Requirements on the Linux* Kernel

Persistent memory support has been present in the Linux* kernel since version 4.0, but as of this writing it is still being improved, so the newest possible kernel is recommended. The Linux kernel must be configured to enable Direct Access (DAX), which is the mechanism to allow access to persistent memory without the need to copy data through the page cache. Before proceeding, check if DAX and PMEM are supported:

The output from this command may differ according to the kernel version. The point of the above command is to make sure the lines with DAX and PMEM exist and are set to either "y" or "m."

If the machine is equipped with some kind of hardware-based persistent memory there is no need to emulate it using DRAM.

After making the above change, build the GRUB configuration.

Changes will take effect after reboot.

Linux kernel currently does not yet support long-lived memory registrations required by RDMA for files on Filesystem-DAX. The effort to add this support is currently underway. Until that support is added, the only way to use RDMA with Filesystem-DAX is to use RNICs with support for on-demand paging (ODP). For example, the Mellanox* MLX5 supports ODP.

Libfabric v1.5 and newer allows using this feature, but it is disabled by default. Enabling it is required to set an environment variable, as follows:

The variable has to be set before running the application that wants to use it. It's also important to set this variable on each node that is expected to use Filesystem-DAX for RDMA; for example, on the initiator system using the librpmem library and on the target system running the rpmemd utility.

The Mellanox implementation of the ODP feature is marked as an experimental feature by the libfabric library. Additionally, the ODP feature imposes the limitation on the maximum size of the memory registration, which should not exceed 128 MB. The entire memory pool replicated by rpmem is a single memory registration; therefore, it is also the upper limit of the rpmem memory pool size established on Filesystem-DAX using this ODP implementation. For details, see the ibv_exp_reg_mr(3) manual page.

Using librpmem with Device-DAX avoids the need for using an RNIC with ODP support so it's more broadly available; this is the setup described in this section. Note that librpmem setup is common for both Filesystem-DAX and Device-DAX.

The ndctl utility is used to manage persistent memory devices on Linux. To install it, use this command:

The persistent memory namespace behavior differs depending on the configured mode. Currently, the only mode supported by the rpmem is devdax. To reconfigure existing namespace to use devdax, use ndctl-create-namespace(1).

If ndctl-create-namespace(1) succeeds, a new DAX device is available in the /dev directory. By default, it is owned by the root user. Chown allows making it available for the regular user (for example, user in the commands below). 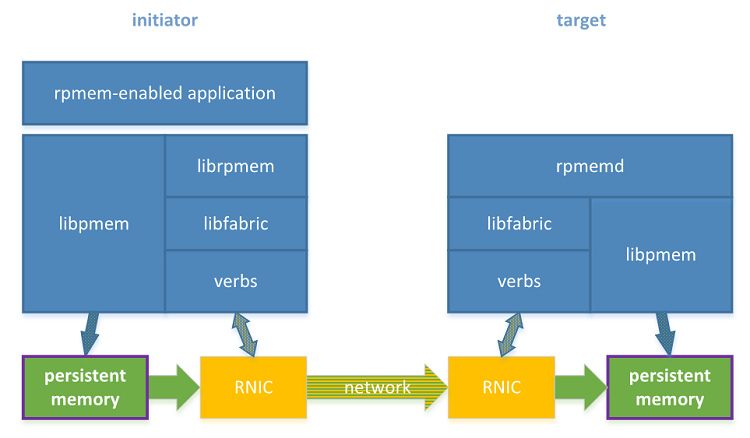 The rpmem replication between two machines may be subject to limits established via limits.conf(5). Limits are modified on the initiator and on the target separately. For details, see Single Machine Setup.

Rpmem can operate in one of two possible modes (described in Two Remote Replication Methods), depending on the target platform configuration:

Disabling Intel® Data Direct I/O Technology (Intel® DDIO) in the ARRM allows the data to reach persistent memory without first going into the CPU cache. But disabling Intel DDIO alone does not provide the full solution to the problem of how to make stores persistent. Simply writing to the target’s memory using RDMA Write doesn’t guarantee that it reached the persistence because it may be stuck in NIC, PCIe*, or memory controller buffers. This is why rpmem in ARRM mode follows RDMA Writes with an RDMA Read to flush those buffers.

ARRM is the most performant rpmem replication mode and it is the recommended way to use rpmem, but it can be used only when Intel DDIO can be switched off. The GPRRM shall be used as alternative approach if Intel DDIO cannot be disabled.

Note Intel DDIO is enabled by default on all Intel® Xeon® E5 processors and version 2 of the Intel® Xeon® E7 processor product family. Some manufacturers allow it to be disabled in the BIOS2. For details on how to disable Intel DDIO see your motherboard manual.

In GPRRM mode, rpmem has to notify rpmemd on the target machine each time it wants to make the memory range persistent. This additional communication makes the GPRRM configuration not reach the full RDMA potential. In the ARRM mode, rpmem can guarantee data persistence using only RDMA without involving additional software components.

When writing data to persistent memory, Intel DDIO prevents the data from reaching persistence directly by storing it in the processor cache. Afterwards, the data must be flushed from the processor cache to reach persistence. This caching behavior makes it impossible for rpmem to make stores persistent using only the RDMA commands. In this case, rpmem has to operate in the GPRRM mode.

Network interface configuration (Figure 3) is exactly as described in Shift to RDMA-Capable Network.

The required software components are the same as in previous examples. Additionally, the initiator requires libpmem and libpmem-devel. The libpmem library is required because now, on the initiator’s side, persistent memory will be used instead of volatile memory. This time, an additional application—called daxio—will be needed to read device DAX contents from the command line.

The librpmem-devel and libpmem-devel packages are required only for compiling the application. They are not needed at run time.

SSH configuration is exactly the same as in previous examples. Those steps do not have to be repeated.

In the rpmemd poolset configuration, point to the DAX device. This will enable replication to the persistent memory.

The device DAX line in the poolset file should use the AUTO keyword instead of specifying a file size. This keyword tells rpmemd to use the entire capacity of the DAX device.

By default, rpmemd is using the GPRRM method for assuring data persistence. Assuming that Intel DDIO is disabled, to let rpmemd take advantage of ARRM instead of GPRRM, we need to enable ARRM. To do it, add a new line to the rpmemd configuration file:

The librpmem configuration is exactly the same as described in Librpmem Configuration.

This application can be executed on any of the previously described setups. For brevity it is assumed it is executed on the setup described in Start to Shine – Replication to Remote Persistent Memory.

In this part, the initiator and the target are two separate machines connected using an RDMA-capable connection, and both of them are equipped with persistent memory. The persistent memory namespaces on both are configured as device DAX, so /dev/dax0.0 is available on both systems.

Creating a Memory Pool with a Replica

Replicating data to the target and reading it back are performed by two simple functions:

This code sample for reading and writing to the persistent memory on the target is from the Hello World application (hello.c).

The rpmem_persist(3) function always replicates data from the memory provided during rpmem_create(3) / rpmem_open(3) calls. Offset and length determines the specific range of this memory to replicate.

Both functions skip DATA_OFF, which is reserved for the rpmem pool header.

Recover From the Replica

Rpmem also allows continued operation using the replica when the initiator is corrupted. To demonstrate how this works, Fibonacci application (fibonacci.c) is used. This application opens the memory pool on the initiator and the replica on the target. It first writes the first two numbers from the Fibonacci sequence, and then it closes the memory pool and exits. When it’s executed again, it opens both pools, reads the two stored numbers, and generates the next one. It generates one number from the Fibonacci sequence each time it is executed.

The interesting part of this example starts when the primary pool is somehow corrupted. In the scenario presented below it will be overwritten with random data. When the application executes again it will have to decide which copy, initiator’s or target’s, is valid, generate the next number, and store the valid state in both memory pools.

Creating a Memory Pool with a Replica

The fibonacci.c file should be compiled, linked, and run as follows:

Note For brevity, the first 4096 bytes are skipped using the --skip argument to daxio. For details regarding the daxio(1) command, refer to its manual page.

The Fibonacci application stores the state required to generate the next number from the Fibonacci sequence. This structure looks as follows:

This code sample comes from the Fibonacci application (fibonacci.c).

Each state structure starts with the FIBO signature, so it is easy to find them in the memory views obtained using hexdump. The view shown below represents the state after running the Fibonacci application 10 times.

Assuming the primary pool on the initiator is broken, Fibonacci would have to detect that it is corrupted, restore the state from the replica, and continue with generation of the next number from the Fibonacci sequence. To corrupt the memory, the daxio command is used.

Now it’s time to check how resilient our Fibonacci sequence generator is.

Similarly, this application can recover from the target’s replica failure. The relevant part of the Fibonacci application (fibonacci.c) follows:

In this case it is a simple process engaging naive checksum and signature to verify validity of the structures being read from persistent memory. Having that, detecting memory pool corruption is straightforward.

To keep the Fibonacci example simple and focused on rpmem, a simplistic checksum is used to detect and recover from corruption. For more complex persistent memory data structures, libpmemobj (also part of PMDK) is recommended. That library supports flexible allocation, transactions, and atomic in persistent memory, and will use rpmem when the poolset files are configured for remote replication.

Part 3, "RDMA Enabling for Data Replication," describes how to build an RDMA-capable network.