DLRM (Deep Learning Recommendation Model) is a deep learning-based model for recommendations introduced by Facebook. It’s a state-of-the-art model and part of the MLPerf training benchmark. DLRM poses unique challenges on single- and multi-socket distributed training because of the need to balance compute-, memory-, and I/O-bound operations. To tackle this challenge, we implemented an efficient scale- out solution for DLRM training on an Intel® Xeon® processor cluster using data and model parallelization, new hybrid splitSGD + LAMB optimizers, efficient hyperparameter tuning for model convergence with much larger global batch size, and a novel data loader to support scale-up and scale-out. The MLPerf v1.0 training results demonstrate that we can train a DLRM with 64 Intel Xeon 8376H processors in 15 minutes, a 3x improvement over our MLPerf v0.7 submission (which could only scale to 16 Intel Xeon 8380 processors). In this article, we describe the optimizations that were applied to achieve this performance improvement.

We use a hybrid parallel solution to improve the scalability of DLRM MLPerf training, and then use a vertical split embedding table to improve scaling even further (Figure 1). 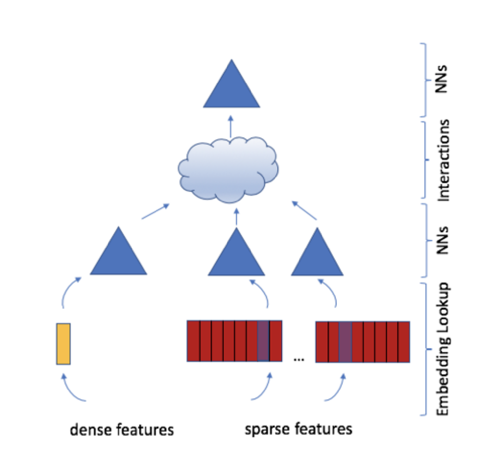 in every model instance, and all-reduce collective communication is used to average the gradient between ranks. 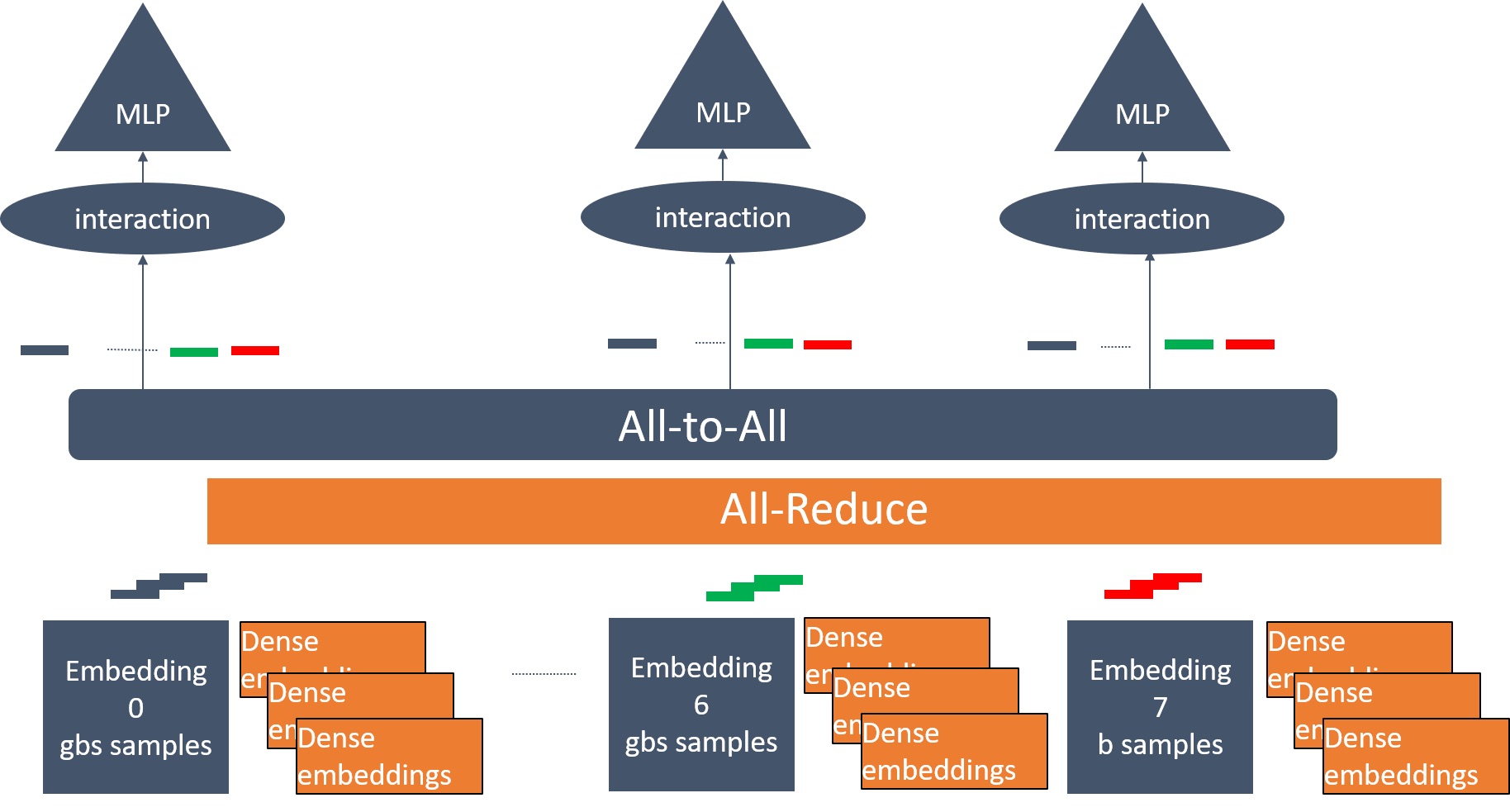 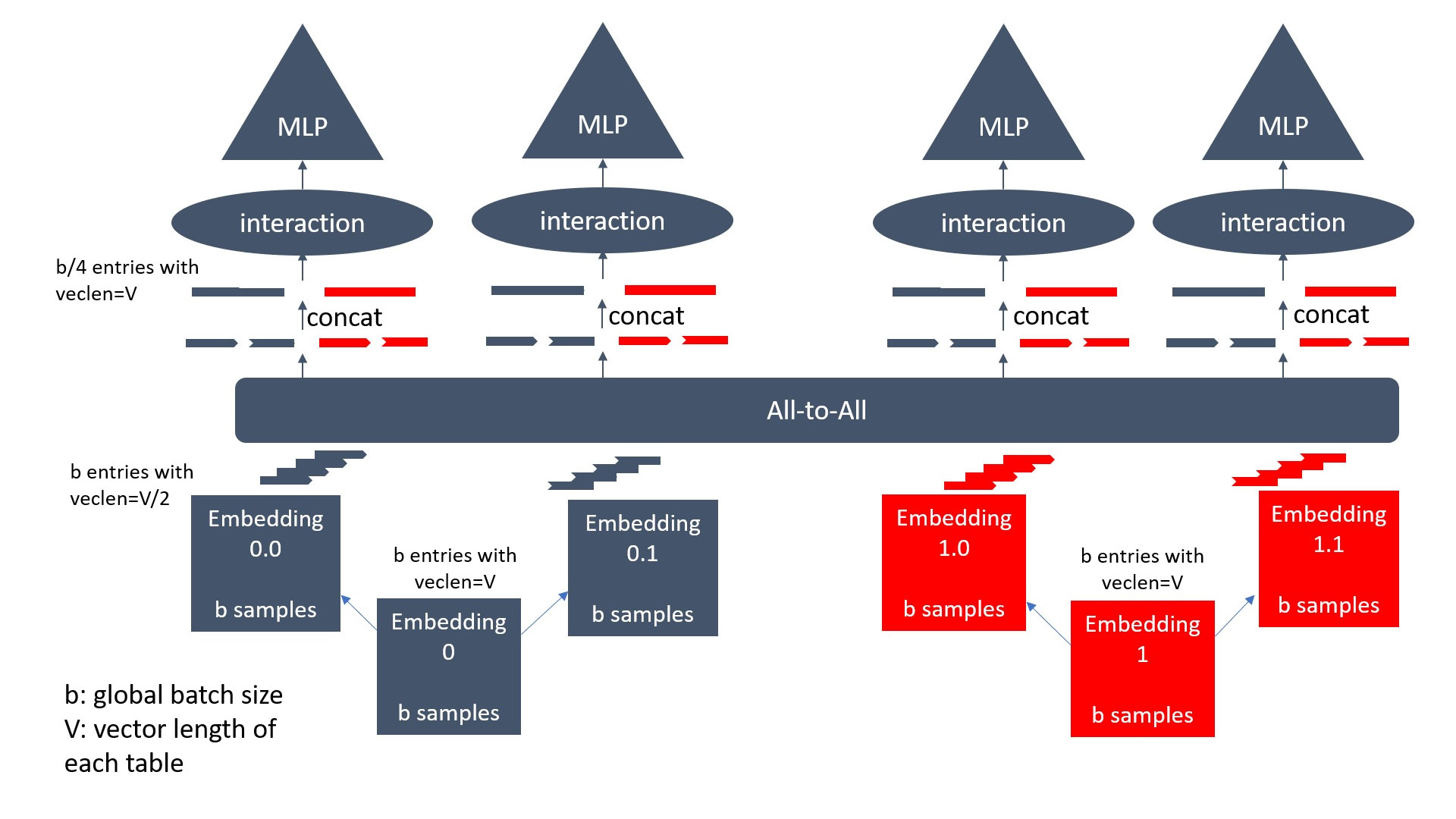 The advantages of our vertical split embedding-based hybrid parallel approach are as follows:

To get better scaling efficiency, a layer-wise adaptive large batch optimization technique, called LAMB, is used to enable large batch-size training. We also use a split version of LAMB and SGD to leverage the BFloat16 Intel® DL Boost instruction. This allows scaling to 64 sockets and higher to reduce the TTT for DLRM training. A 32K global batch size is common for DLRM. When we scale to more ranks, the local batch size will be exceedingly small, which means that the local workload cannot saturate the processors. In this case, there is no opportunity to overlap between communication and computation. Therefore, we need to use a larger global batch size when scaling to more ranks.

SGD (stochastic gradient descent) is the default optimizer in the reference code of DLRM. It works well and converges in 0.75 epochs with 64K global batch size, but fails to converge at larger batch size (i.e., 256K). In our solution, we use LAMB (an Adam-based optimizer) to enable 256K global batch size training and achieve convergence in 0.8 epochs for DLRM training. LAMB stores the first- and second-order moments for every weight. Compared to the naïve SGD optimizer, LAMB needs 3x the memory footprint. DLRM is memory-bound because of the large embedding tables and because the gradients of the large embedding tables are sparse. To reduce the memory footprint, the LAMB optimizer is only used in the data parallel part of the computation. The sparse embedding table still uses the SGD optimizer.

We use the Intel DL Boost BFloat16 instruction to speed up DLRM training. Master weight is often used to maintain training accuracy with BFloat16. Master weight is a copy of Float32 weight stored in the optimizer to update weight, while a BFloat16 weight converted from master weight is also needed to forward and backward pass. It needs about 1.5x higher memory footprint compared to Float32 training and aggravates the memory bound nature of DLRM. In this part, we use the split optimizer to reduce the memory footprint of BFloat16 training (Figure 5). All inputs parameters in Scope I work with BFloat16 (which are truncated from corresponding Float32 parameters) at forward and backward training stages, and then are fed into BFloat16 operators (InnerProduct, EmbeddingBag) to leverage Intel DL Boost BFloat16. When running into parameter-update stage (SGD optimizer scope), it will pack BFloat16 data in Scope I, with another bottom half data in Scope II (which also exist with BFloat16) into full precision Float32 parameters and do normal calculation in Float32. After each update, it will split Float32 data back to separate BFloat16 representation in Scopes I and II. Hence, the Split-SGD doesn’t involve additional memory overhead for every weight. For Split-LAMB, we use the same method to pack and unpack weight and keep momentums in Float32. 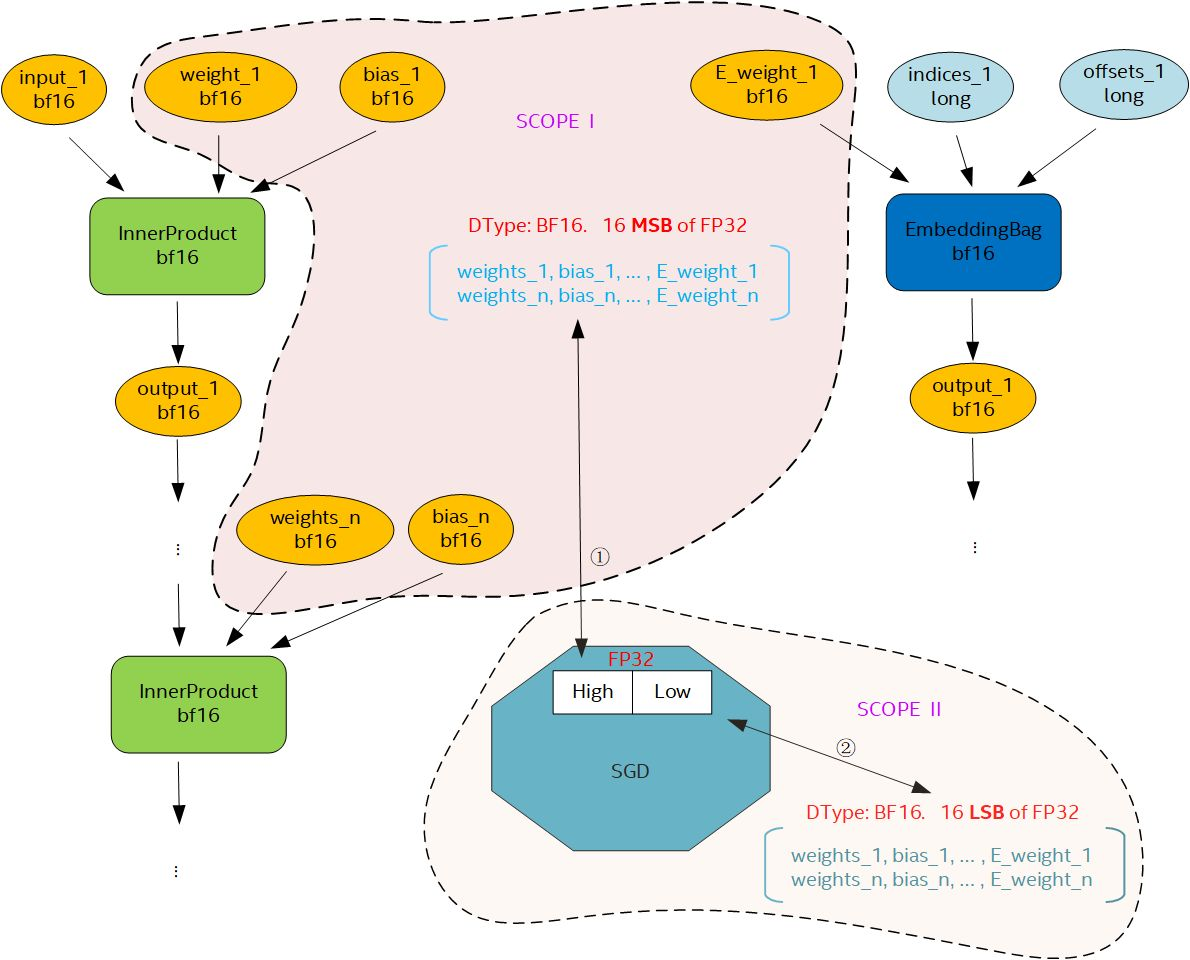 We used SigOpt, a leading experimentation platform that combines run tracking with scalable hyperparameter optimization for any type of model (e.g., deep learning, machine learning, high performance computing, and simulation). Acquired by Intel in October 2020, SigOpt allows for the use of any hyperparameter optimization (HPO) method with its scheduler (e.g., random search, grid search, and Bayesian optimization), but also offers a proprietary optimizer that combines the best attributes of a variety of Bayesian and global optimization algorithms. We found SigOpt’s optimizer performed best for our purposes.

DLRM training converges in a few iterations and reaches the 0.8025 AUC (area under curve) threshold for 256K global batch size (Figure 6). This exceeds the 0.75 AUC achieved for 32K global batch size. We can see that SigOpt quickly finds the hyperparameter set that meets the threshold and continues to improve beyond our threshold. SigOpt provides a variety of out-of-the-box visualizations, charts, plots, comparisons, and tables in a web dashboard. The SigOpt parameter importance analysis shows the critical parameters for our experiment (Figure 7). 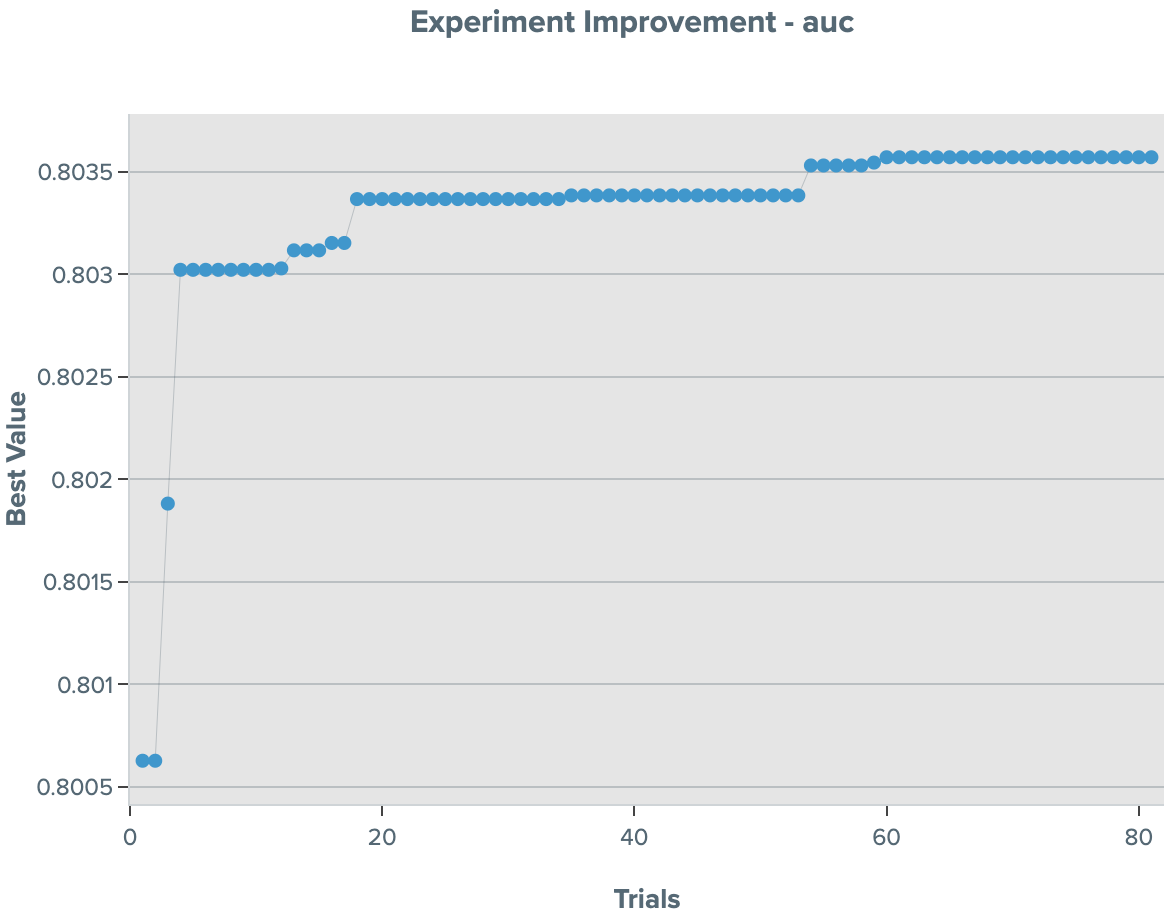 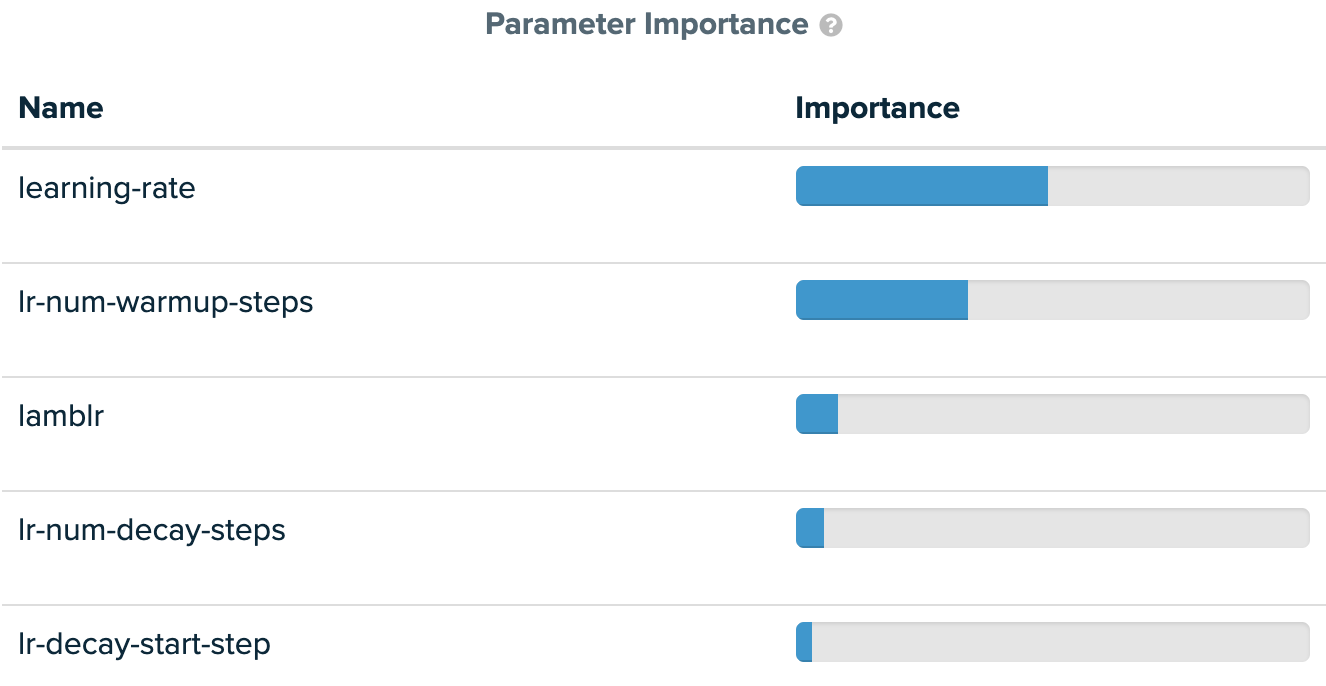 A terabyte dataset is used to train the MLPerf DLRM model. The data is row-major and contiguous in memory. There are 40 elements per sample (one label, 13 numerical features, and 26 categorical features) and every element uses four bytes. Numerical features work as inputs of bottom MLP (data parallelism), and categorical features work as inputs for embedding. (Small tables work with data parallelism, large tables work with model parallelism.) For a single-instance case, we need to read local batch size (LBS) samples for every iteration. If we just use the data parallel scale-out solution, every instance just reads LBS samples per iteration, but when we use the hybrid parallel approach, there is only local copy to part of the large embedding tables for every instance. So, global batch size (GBS) embedding indices are needed for large embedding tables in the current instance, and inputs data for every instance.

Figure 8. A novel model parallel friendly data loader. Every instance first reads LBS inputs, and then uses all-to-all to get GBS categorical features for the large embedding tables in the current instance.

The DLRM scale-out solution is implemented using PyTorch, Intel® Extension for PyTorch (IPEX) , and Intel® oneAPI Collective Communications Library (oneCCL). We submit both closed division and open division MLPerf benchmarks (Figure 9). The closed division results (retrieved June 30, 2021) show that it takes about two hours to get convergence if we only use four sockets with 32K GBS on an Intel Xeon Platinum 8380H processor. When we used LAMB to enable 256K GBS and vertical split embedding table to scale to 64 sockets on an Intel Xeon Platinum 8376H processor, it only took 15 minutes to converge (open division results, retrieved June 30, 2021). 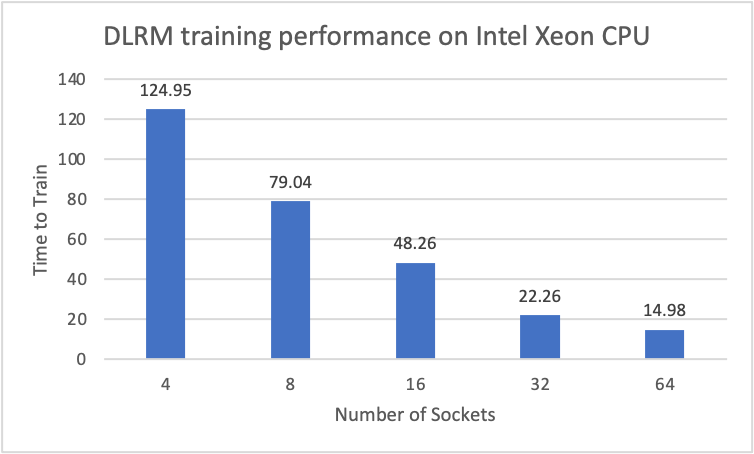 For DLRM MLPerf training, we provide a complete scale-out training solution to resolve the challenge of balancing a mixture of compute-, memory-, memory capacity-, and I/O-bound work. First, we use hybrid parallel to reduce communication cost and memory consumption. Vertical split embedding tables not only helped us to scale to more ranks, it is also a fantastic solution to train any other workloads with oversized embedding tables. Second, a LAMB optimizer enables large batch size training to get better scaling efficiency. At the same time, split optimizer is also the overwhelming choice to leverage Intel DL Boost BFloat16 instruction for training. Finally, a novel model parallel data loader reduces the I/O bandwidth requirement. With this solution, you can train the DLRM MLPerf model in 15 minutes (or less if more sockets are used). At the same time, most techniques used in this article can be generalized to other distributed training approaches.