This page describes what a bootloader is, lists the available boot loaders and their main characteristics, describes how to get started with the bootloaders, and lists additional resources.

1. What is a Bootloader

When an SoC device boots up, a piece of software called the BootROM is first run. For several reasons, the BootROM has the following limited functionality:

The end user application on the other hand is typically large and requires the system to be configured as desired by the end user before it can run.

The bootloader's job is to bridge the gap between the BootROM and the end user application.

Besides the features listed above, bootloaders also offer the following advanced features that can enable more complex deployment and more convenient development:

Sometimes the bootloader process can be split into multiple stages, typically two.

For Cyclone® V SoCs, the BootROM can only load a boot loader of up to 64 KB in size because the SDRAM is not yet brought up at that stage. Because of the size limitation, advanced features such as networking or complex filesystem access cannot be accomplished. If such features are desired, the first stage of the bootloader brings up the SDRAM and then loads a second stage with more functionality. A two-stage bootloader is the default option for Cyclone V SoCs and Arria® V SoCs.

Intel® Arria® 10 SoCs have a larger RAM size. With 256 KB of on-chip RAM, the first stage of the bootloader can have more functionality than Cyclone V and Arria V SoCs. Because of that, typically just one stage is required. However, for even more complex cases, such as accessing several types of flash, complex filesystems, and networking, the user is free to use an additional bootloader stage.

For Intel® Stratix® 10 SoCs, a two-stage bootloader is typically used. The first small bootloader stage is part of the FPGA configuration stream and is loaded by a secure device manager (SDM) into the HPS on-chip RAM, while the second larger bootloader stage can be stored anywhere the HPS has access to.

All Intel SoC FPGA projects start with a hardware project where various system settings that impact the HPS are entered by the user. These include:

Depending on the exact bootloader and SoC device family, the handoff can take various forms. Typically:

The primary method of entering or changing the handoff information is through editing them in the Qsys.

In addition to the handoff information, the bootloaders also have various settings that can be selected by the user through the following methods: 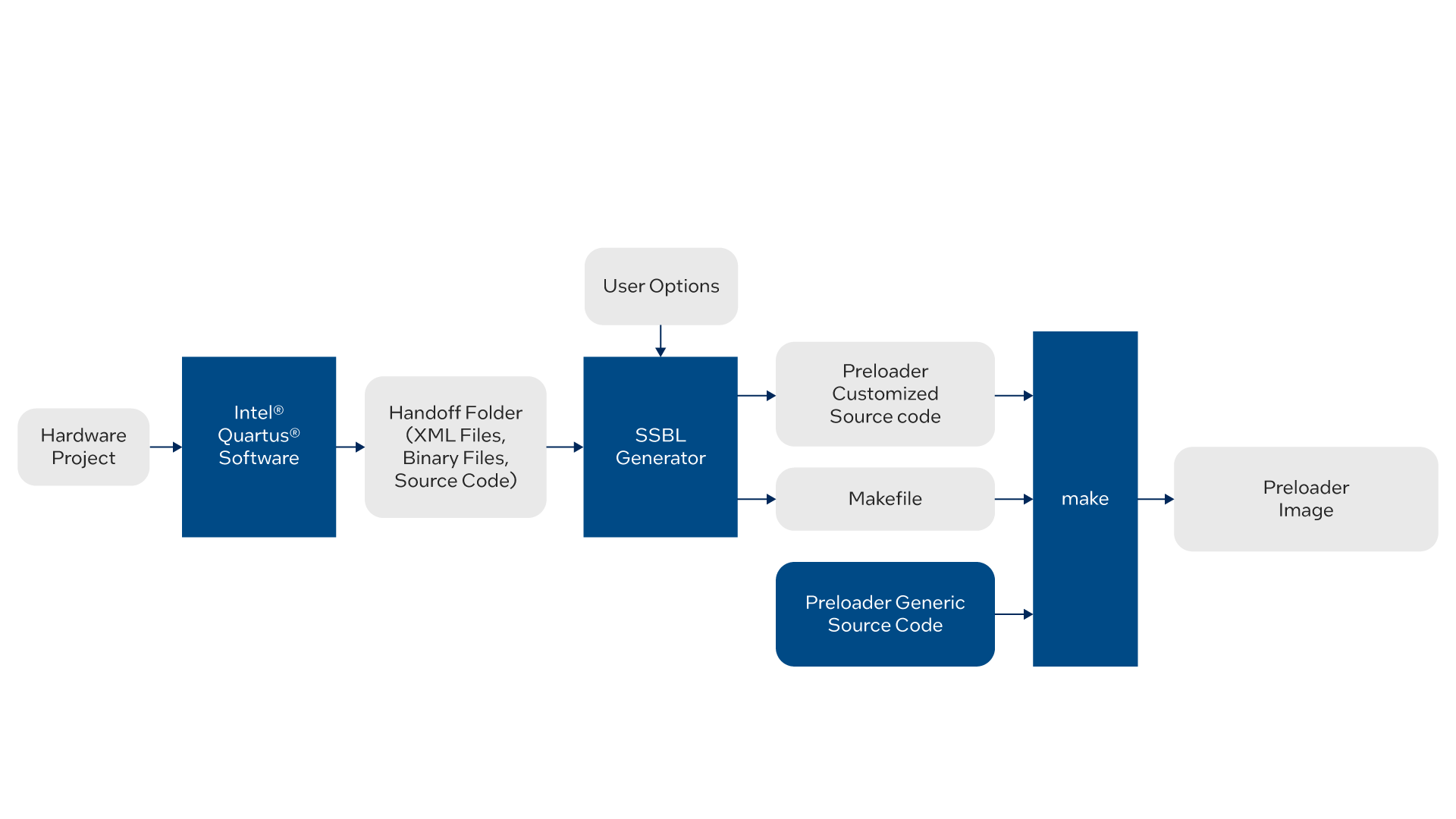 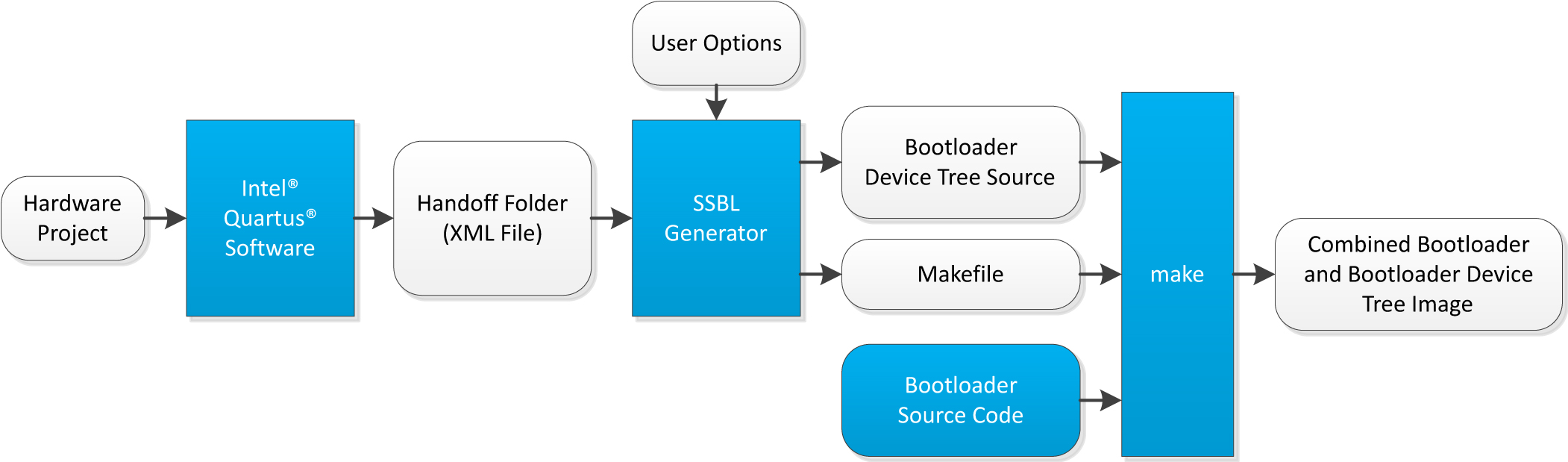 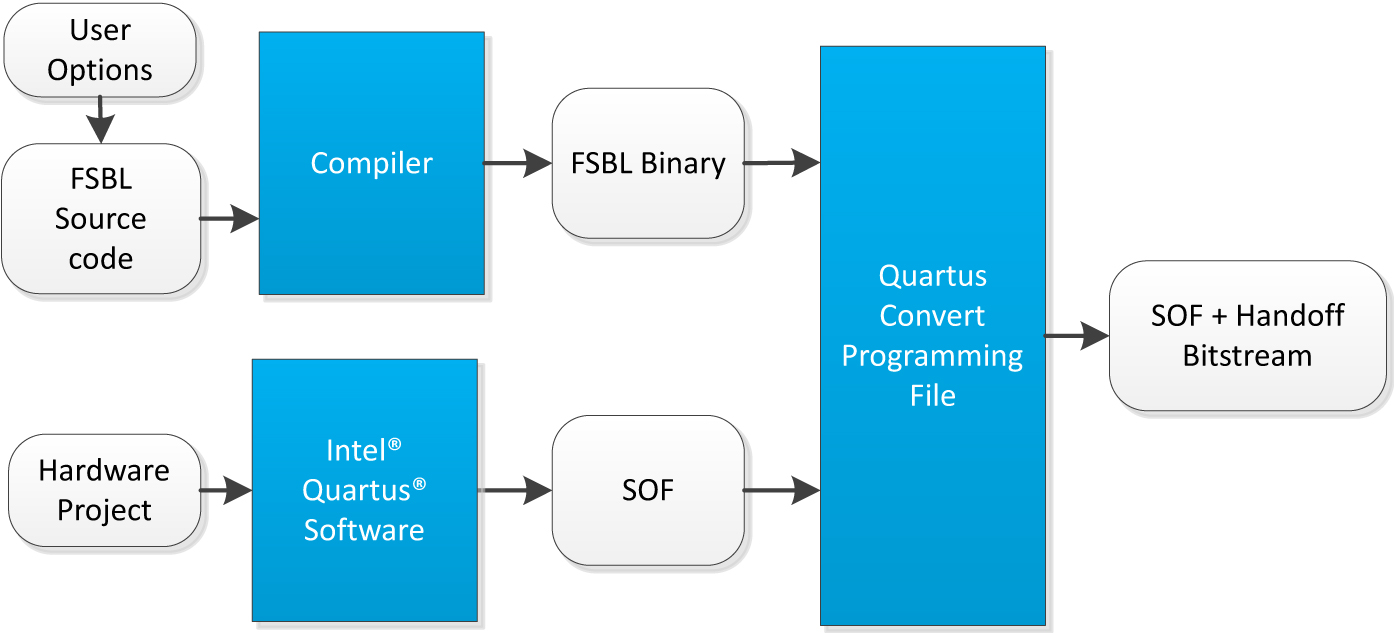 U-Boot is a bootloader that is widely used by the industry and offers numerous capabilities:

U-Boot is developed under a general-public licence (GPL) so any contributions that are made to a product that is being delivered to the public must also be made public.

The U-Boot source code is available at the U-Boot SoC FPGA page on the GitHub website.

Note that support for Cyclone V and Arria V SoCs was mainlined into the official U-Boot git tree on the GitHub website. Work is in progress to also mainline support for Intel Arria 10 SoCs.

The MPL is available for the following devices:

The MPL is offered with a Berkeley Software Distribution (BSD) license, which allows more convenient development and deployment.

The MPL is delivered as part of the SoC EDS and is a project archive in the <SoC EDS Installation Folder>/embedded/examples/software/Intel® FPGA-SoCFPGA-HardwareLib-MPL.tar.gz file. The archive contains a file named README.txt, which contains detailed MPL descriptions and usage information.

The UEFI bootloader is available for the following devices:

Because the UEFI is very well-specified and used by hundreds of technology companies, a lot of the code can be reused, enabling faster development cycles.

The UEFI bootloader also offers the capability to run special applications that target the DXE environment. Such applications can be executed then upon exit control returns to the DXE.

UEFI is offered with a BSD license, which allows more convenient development and deployment.

The UEFI source code is available at the UEFI SoC FPGA page on the GitHub website.

For Intel Arria 10 SoCs, the UEFI is also delivered with SoC EDS enabling the same development flow as U-Boot.

The ATF is developed collaboratively under a BSD license, which allows convenient development and deployment.

The ATF has a small footprint, and is designed as a First Stage Bootloader (FSBL). It is used with UEFI to load the PXE then DXE, but it can also for example be used to load a simple bare-metal application.

The source code for Intel SoC FPGA port of ATF can be accessed at https://github.com/Intel FPGA-opensource/arm-trusted-firmware.

The following resources are available for you to get started with U-Boot:

The MPL is delivered as part of the SoC EDS and is a project archive in the <SoC EDS Installation Folder>/embedded/examples/software/Intel FPGA-SoCFPGA-HardwareLib-MPL.tar.gz file. The archive contains a file named README.txt with detailed usage information for Intel Arria 10 SoCs, Arria V SoCs, and Cyclone V SoCs.

The following resources are available for you to get started with UEFI:

The following user guides are available:

Source code can be obtained from the following websites: