4.0 Links to the Previous Chapters

4.1 Function and Usage of Multiplane Overlay

Multiplane Overlays (MPO) is a new feature of WDDM1.3 (DX11.2) initially introduced in Windows 8.1, which is now extended to WDDM2.0 (DX12) in Windows 10. MPO supports using the original resolution to display gorgeous 2D art and UI elements, while drawing 3D scenes into a smaller and stretchable frame buffer. The stretching and composition of surfaces at different resolutions are automatically implemented by the system, and transparent to applications.

The major role of MPO is to allow a game to maintain a stable and appropriate frame rate under different circumstances, thereby improving the overall game experience. On one hand, the resolution almost always has a significant impact on the performance of modern games. With the popularity of high-definition 4K screens, the resolution of game window also increases. Increasing pixels also increases texture sampling and the bandwidth of render target, which brings challenges to the performance of games. Secondly, post-processing technology is increasingly used for rendering 3D scenes, which increases the complexity of a shader, so the trend will be that a trend that the cost per pixel determines games performanc. Therefore, setting the appropriate resolution is critical to maintaining game performance.

Furthermore, for games like role playing, real-time strategy and multiplayer online, rendering GUI components at the initial window resolution is also very important. For example, even on low-end platforms, players will want to text chat with teammates during game play. GUI components are mainly 2D graphics with relatively low rendering overhead, thus rendering at the window resolution can provide the best visual experience.

MPO provides a compromise solution for high-resolution display and gaming performance. Using MPO can alleviate the rapid performance degradation of games in high-resolution rendering, allowing the games to run smoothly on the majority of hardware platforms. MPO supports not only rendering GUI layer and 3D content layer in different resolutions, bu also rendering in different frame rates. For instance, for a GUI layer, just present when a change happened. It benefits to performance and power efficiency. Fiture 1 illustracts the swap chain composition of MPO.

Because MPO is a new feature of driver model, graphics driver provides the implementation of MPO to the upper-level D3D runtime or DXGI runtime. MPO can be implemented by WDDM1.3 or higher version drivers through software or by graphics hardware that uses a dedicated pipeline for the GPU in order to reduce consuming so many CPU and GPU resources, helping to further enhance game performance and lower power consumption. Intel will add hardware support for MPO in 6th generation Intel® Core™ processors (codenamed SkyLake). 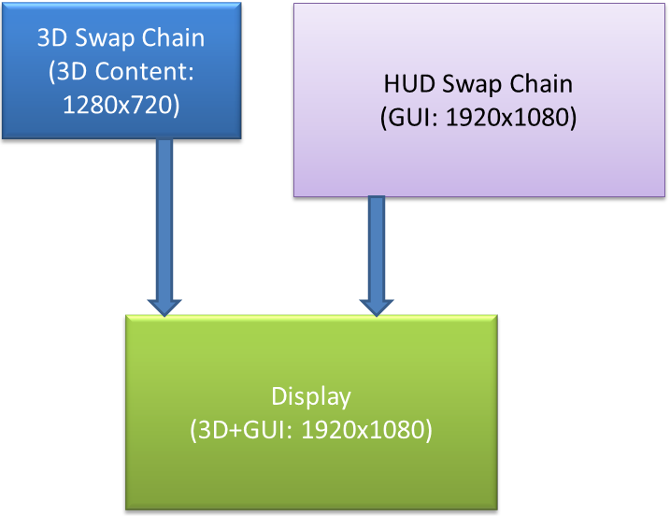 In a game, Multiplane Overlays are typically applied in the following scenarios.

To apply Multiplane Overlays (MPO) in a game, you first need to detect whether the software and hardware on the platform support it. The code for this is as follows:

It is recommended to use separate queues for different swapchains. The reason is that DXGI will insert waits on your behalf in order to synchronize with DWM, so using the same queue for two swapchains could result in workloads targeting one swapchain being blocked, waiting for a buffer to become available from the other swapchain.

In the game rendering process, the code logic based on MPO rendering is as follows:

Multiplane Overlays is a new graphic display function on the Windows 8.1 and later platforms. Win10 platform-based DirectX 12 games can easily use the DX12 API to render Multiplane Overlays, potentially solving the problem of sudden drop in frame rate due to high-resolution rendering and high load scenes for games, enabling smooth gaming experience on the majority of hardware platforms.