The influx of people to cities is increasing demands on infrastructure and security at levels previously unseen. Cities across the world are looking to increase efficiencies and provide a welcoming environment to residents and visitors with easily accessible public services. They also want to attract businesses with a connected citizenry. Smart City Kiosks are starting to appear on city streets, and they have a growing number of services on them to make the public interaction with the city more efficient.

Intel and their partners are working towards providing solutions to cities, and one such solution is the varied services that can be deployed on smart city kiosks. These include surveillance, wayfinding, environmental sensors and many more.

Cities experiencing this rapid pace of urbanization are under tremendous pressure to provide core services to residents and visitors. Living and working in a city or visiting should not been seen as stressful, but a convenient and positive experience.

In 2018 Intel Corporation commissioned Juniper Research to do a study on how citizens would benefit from Smart City Initiatives. The research concluded that Smart cities have the potential to ‘give back’ each city dweller 3 working weeks’ worth of time every year.

The key requirement is real time or near real time data to make our cities more intelligent. This in turn will have a big impact on citizens, who can expect improvements in current service levels. In addition, new forms of services will create a level playing field irrespective of an individual’s socioeconomic status.

There is a new type street furniture that is starting to appear on our streets. Commonly called ‘Smart City Kiosks’, these structures are being built with emphasis on digital engagement and future scope for amalgamating multiple services in one physical structure. In addition to the numerous benefits this single unit can provide, it is also being deployed with a new business model. Generally, they are deployed at no cost to the city and funded by advertisements running on the kiosks.

In order to provide the services mentioned above and support surveillance, Intel® has envisioned a Smart City Kiosk reference architecture* that encompasses the system, services and infrastructure as outlined below. 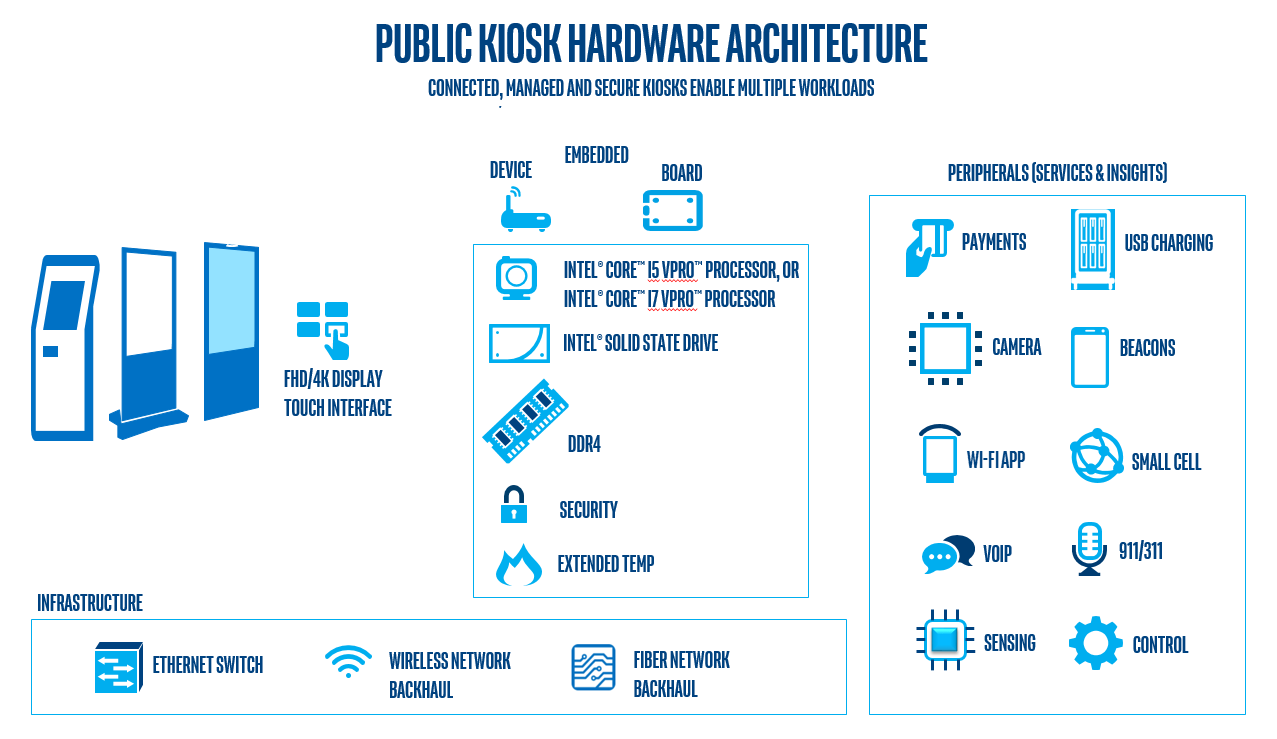 System – Since a Smart city kiosk is an outdoor system, the system needs to comprehend extended temperature for CPU, memory and SSD. Security is an important aspect of configuration and needs to start from the boot up process on the compute. Both data at rest on the storage device and data in transit over the infrastructure needs to be encrypted using AES 256 bit or TLS 1.3 respectively. An Intel® CPU/Platform that supports Intel® Security Essentials can ensure verified, or measured boot via a combination of secure boot and Intel® Platform Trust Technology. Similarly secure execution can be enabled by using an enclave via Intel® Software Guard Extensions constructs. A typical kiosk may require two or more compute units to handle different workloads. DDR4 memory provides faster application access to data and an Intel® Solid State Drive provides optimum, secure storage and remote management capabilities.

Infrastructure – Depending on the specific kiosk installation it may or may not have a Fiber backhaul. A wireless or cellular backhaul connection can be used instead, which can be point-to-point so only a limited number of kiosks can upload to the cloud. A small cell hosted on the kiosk can not only provide increased cellular coverage, but also double as a wireless backhaul connection. The Ethernet switch provides network connectivity to all the different components in the kiosk, in addition to providing separation between internal and external networks for security.

Peripherals – These are key to the services the kiosk provides and the number of peripherals required depends on the specific function and use case for the kiosk. Payments, USB Charging, Wi-Fi/Beacon, VoIP (including 911/311 type emergency service) are user interactive services while camera, sensors (including audio), small cell and control are background services for monitoring.

Not all smart city kiosks will have the architecture elements described above, specifically the peripheral section will be different based on the usage model. For most part, the embedded device architecture and infrastructure pieces would remain constant across the different options. The interconnections and data sharing will bring about continuing innovations for smart city kiosk architecture, adding more value to citizens, city planners and businesses.

A vast amount of data is being captured by a kiosk as citizens interact with it. This data provides insights into what has been important to the public during their interaction, as well as useful information on the area the kiosk has been deployed in. This could include busy periods, number of people in the city center, demographics, pollution levels during the day, highest traffic in the day and so on.

In addition to cameras, the smart city kiosk has surveillance, earthquake and air quality monitoring capabilities. These capabilities are also present in standalone connected devices across the city. A smart city kiosk can act as a central point, consuming and distributing information to other connected devices. Offering more real time, pertinent information to the public now becomes feasible. In addition it provides an aggregated view across a certain region to the city planners.

The transformative nature of a smart city kiosk will truly be realised when imagined as an edge device interacting with a number of other IoT devices that will be publishing and consuming data. Given the amount of data that is generated by a smart city kiosk, low latency processing can be achieved by an edge system that can be used in one kiosk per block or in the ratio of 1:10. An application view of such a configuration would look as follows: 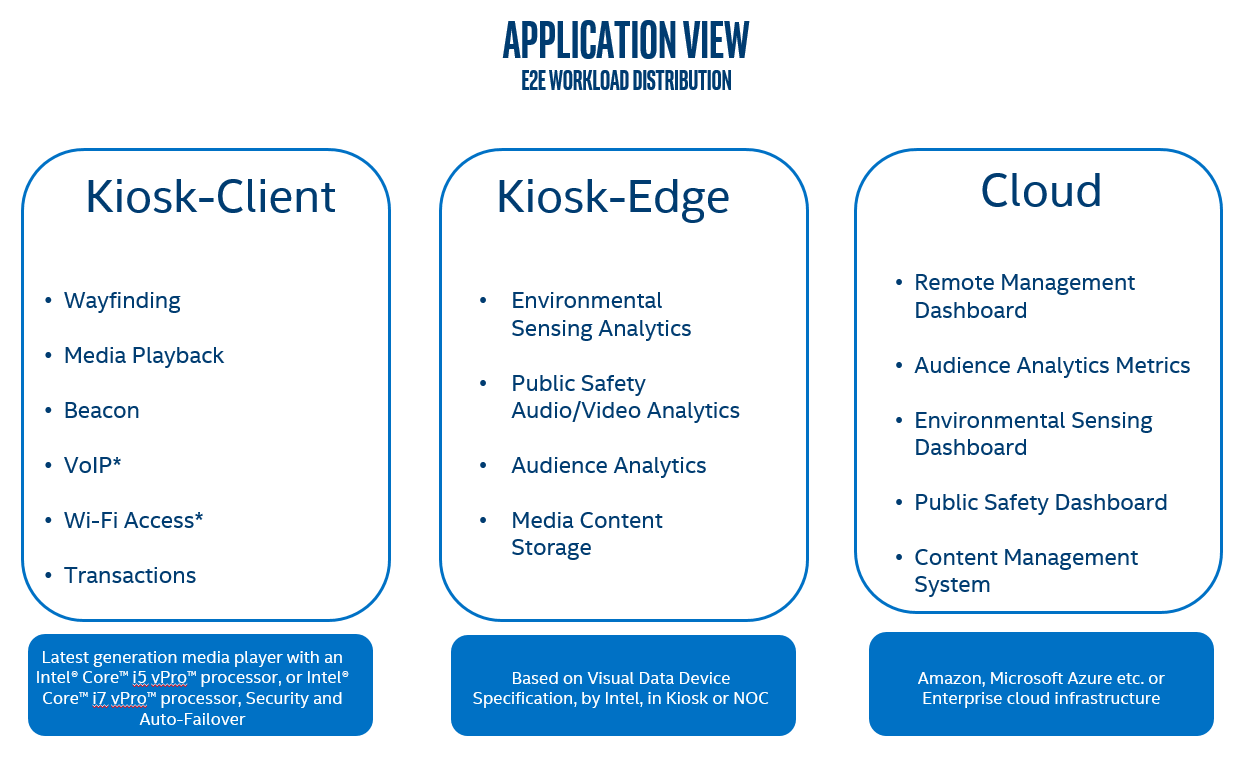 This edge system can be used to gather environmental data from nearby kiosks, either to localize any events or to predict movement of people in a given urban area. In addition to analytics the edge system can also serve as a storage hub for media content, application deployment and management.

If events are taking place across a city, such as cultural, sporting or national events, the kiosk becomes smarter with the combined data from them. For example, transit schedules combined with event information can be used to provide alternative routes to the city, specify preferred modes of transportation and even increase parking fees in order to deter the public from driving in to the city.

The data collected across many months will make the system even more intelligent; it can now provide predictive analytics based on similar or the same event taking place around the same time of the year. This becomes a truly intelligent system that provides information for a smarter city.

Let’s take the example of how brands may interact with the public. It would now be possible to trigger an advert for a cold drink as soon as the temperature reaches a certain number. This not only triggers the smart city kiosk, but the sensor information can be taken as input by other signage devices to show the same or a related advert.

How about the ability to get a special discount from a store in the vicinity by simply tapping your contactless card on the screen and redeeming the discount automatically when you’ve made a purchase instore? This would now be possible with the engagement of local businesses who may want to target the public in the vicinity and tempt them into the shop with a special offer. The same concept could apply to pulling in customers to bars and restaurants.

In the event of an emergency, sensor data, audio and even video content could be shared with emergency services to act appropriately. These are all interactions made possible by providing the right data to the audience at the right time, therefore giving important information to the general public and to companies.

There are a variety of data sources; both structured and unstructured. The data is being created and absorbed to make city living more enjoyable and providing vital information in real time. This enables the city to cope with the ever increasing demands placed on it.

The data plays a crucial role. To gather and disseminate that data, core technologies such as IoT, Connectivity and AI offered by Intel are being adopted by kiosk manufacturers and service providers in an architecture similar to the one referenced above.

The current generation of smart city kiosks are paid for through advertisements. But there is potential to generate revenue using the data generated. This data is provided to public and private services to enhance their understanding of the city. This will create new streams of revenue via a two sided business model between the API/Data creators and the consumers of that data.

Smart city kiosks are expensive systems that are built to run for a long period of time. Therefore they have to be deployed with high reliability, ease of maintenance and with ease of upgradability. There needs to be a mechanism for easily replacing the hardware components on or before failure. The ability to self-monitor and replace components ahead of failure is important.

The Intel® Core™ i5 processor and above includes support for Intel® vPro™ technology or Intel® Active Management Technology, which provides OOB remote management. The compute can be managed remotely from the time BIOS is loaded at start up. An open source remote management software SDK, Mesh Central, with its associated tools such as Mesh Commander, is also available to remotely provision the device and activate Intel® AMT. In addition, the smart city kiosk reference architecture can also include a failover design* to allow the functioning system to seamlessly take over so the kiosk can continue functioning until remote maintenance is started. This ensures the smart city kiosk can provide visually rich graphics and video, reliable connectivity and hardened security. Redundancy across all critical components must be a key consideration

At Intel, we have been working with our partners to build reference designs and productized solutions available to the market. As part of the Intel® IoT Market Ready Solution program we have a number of partners who have built Smart city kiosks with Intel® technology that have already been deployed across a number of countries. These curated solutions are built for quick integration/deployment, long life and being future proof.

Smart city kiosks play an important role in making cities smarter and promoting community participation and cooperation. They are appearing in City Centres, Bus and Train Stations, Airports, Gas Stations, Convention Centres and in many more public places. According to the location where they are deployed the functionality provided by each kiosk and the applications running on them would vary to best support those interacting with it.

These kiosks generate a tremendous amount of data and can also interact with other IoT devices to enhance the experience offered to those interacting with it. Smart city kiosks can truly transform the way we interact with cities and help reduce the burden on critical core services whilst improving the lives of citizens and those visiting the city.

For more information about the Public Kiosk Architecture document, contact your Intel representative.
1