What are the best ways to vectorize game code, to access the power of Intel® Streaming SIMD Extensions (Intel® SSE) vector units across the broadest range of popular and emerging CPUs?

Traditionally, SIMD (single instruction, multiple data) code is written with hand-coded intrinsics or generated by an auto-vectorizing compiler. Targeting multiple families of SIMD intrinsics in your game can add a lot of development time.

Auto-vectorizing compilers have tried to ease the burden of writing code against multiple instruction sets, but often leave performance lacking.

There are trade-offs to both approaches. But if you want easy and portable code, with a low barrier of entry and improved productivity, use Intel® Implicit SPMD Program Compiler (Intel® ISPC).

SIMD programming techniques are applied at compile-time or link-time. These techniques include:

Each approach has its pros and cons. Hand-coded intrinsics—when handled by an intrinsics ninja—typically deliver excellent results. But hand-coding for a wide range of SIMD instruction sets can increase complexity, is time-consuming, and increases maintenance costs. For example, if you want to target multiple ISAs, you need to write multiple algorithms. This decreases productivity and increases code complexity.

Auto-vectorizing compilers can reduce the complexity of targeting multiple ISAs, but they are far from perfect. The compiler is no substitute for an experienced programmer. The programmer is often left to optimize manually, using SIMD intrinsics or inline assembly.

Intel ISPC is a C-like language with new keywords that make vectorization straightforward. It abstracts the width of the SIMD registers, and the programmer need only write the program for one instance. The compiler then parallelizes the execution across the SIMD units.

Intel ISPC has a rich standard library for math, bit manipulation, memory, and cross-lane operations. It’s relatively easy to include in C/C++ applications: simply include a generated header and link the resulting object files.

Essentially, Intel ISPC will explicitly vectorize your code to optimize it for various SIMD instruction sets on x86 (32 bit and 64 bit) and 64 bit ARM CPUs. It uses an SPMD (single program, multiple data) execution model that runs a number of program instances in parallel.

We compared the programmer-hours spent writing intrinsics in C++ for multiple ISAs to those spent on write-once Intel ISPC code for the same algorithm. Our hypothesis was that Intel ISPC would beat a novice SIMD developer in both programmer-hours and performance.

Tests compared the performance of:

The test platform consisted of:

We used a triangle culling algorithm called the shoelace formula as a test workload. The shoelace formula computes the area of triangles. Its name comes from the criss-cross pattern used to multiply the X-Y coordinates of a triangle’s vertices. Each vertex has two components, X and Y. The sign of the area determines whether the triangle faces front or back, based on the winding order. This can be used to determine which triangles need to be culled. 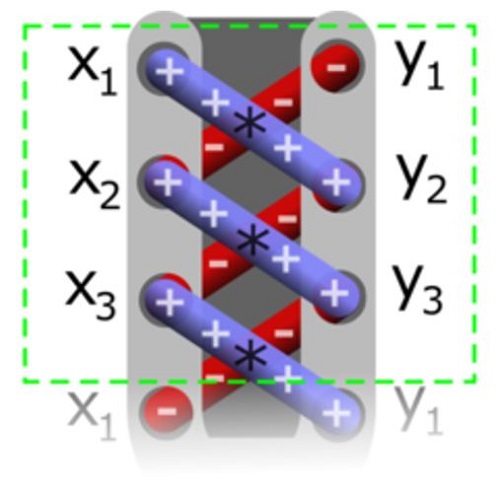 Figure 1. The criss-cross, shoelace-style pattern illustrates how the area of a triangle is calculated by the shoelace formula.

We used the test cases with the shoelace formula triangle-culling algorithm, as shown in Figure 2, to determine whether a triangle faces forward or backward.

Our naïve approach assumed that we could fit all three vertices of a triangle into two Intel SSE SIMD registers. This approach worked, but the fourth lane duplicated the first.

Figure 3. Array of structures (AoS) data layout: vertex components from each triangle are interleaved in an array.

We realized we had fallen into one of the classic pitfalls of SIMD programming: We had chosen a data layout that didn’t fully utilize our SIMD registers. We were only using three-quarters of the lanes available in SSE.

The approach shown in Figure 3 worked with the shoelace algorithm, but required an extra load operation to fill Lane 3 with the data from Lane 0. Additionally, we were able to operate on only one triangle at a time in our Intel SSE registers.

Our first attempt resulted in a bottleneck. We determined that we could transpose the data using additional SIMD registers. This eliminated the need to duplicate a vertex in Lane 3 of the SIMD register.

We reorganized our data into a Struct of Arrays (SoA) layout that allowed us to fully utilize our SIMD lanes. 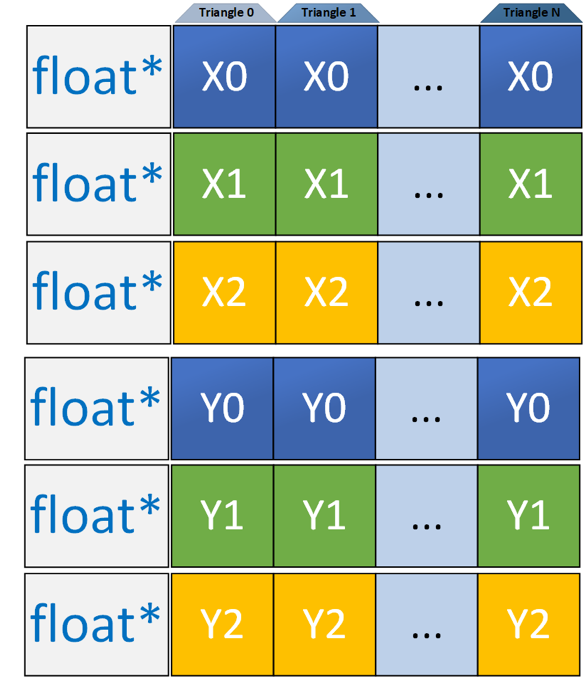 Using the SoA layout with the Intel SSE instruction set, you can process four triangles concurrently. There is no need for the additional load of duplicated Lane 0 data.

Our transposed approach required four additional SSE registers. However, as you can see, Lane 3 is no longer a duplicate, and we can compute four triangles concurrently with the same size registers as our AoS layout.

In a large code base, refactoring the data layout of a core data structure is often challenging. It requires significant developer time and regression testing. However, using SIMD, you can translate your data in memory before calculation. This can impact performance, because you need to call additional SIMD instructions, but it reduces refactoring time.

The built-in functions of Intel ISPC make this easy. It’s as simple as calling aos_to_soa3 with your starting memory location. This loads it into three varying float variables, representing the X and Y components of each triangle’s vertices.

A novice or intermediate software developer may need several attempts to write well optimized SIMD code. However, translating our scalar implementation to Intel® ISPC took less than an hour and was straightforward. More complex algorithms may take longer to port, but nowhere near as long as writing all of the hand-coded intrinsics yourself.

As you can see in the code comparison above, the function signature was modified to add uniform keywords. Instead of a for loop, we used the foreach keyword offered by Intel® ISPC and iterated over the same range with a slightly modified loop syntax. Variables in the loop body use the varying keyword. This can be used implicitly but is shown here for clarity. Uniform variables represent scalar values, and varying variables represent a vector, with the number of lanes defined by programCount.

Compare the above Intel® ISPC implementation with our hand-optimized AVX code, below.

As you can see, operations that compare whether the area is greater than or less than zero introduce complexity. Meanwhile, readability is reduced when compared to the original scalar implementation.

Both proved faster than the naïvely enabled auto-vectorization code. Auto-vectorization might improve with additional analysis and optimization. However, such iterations would require more development than was necessary to calculate our Intel ISPC performance results. 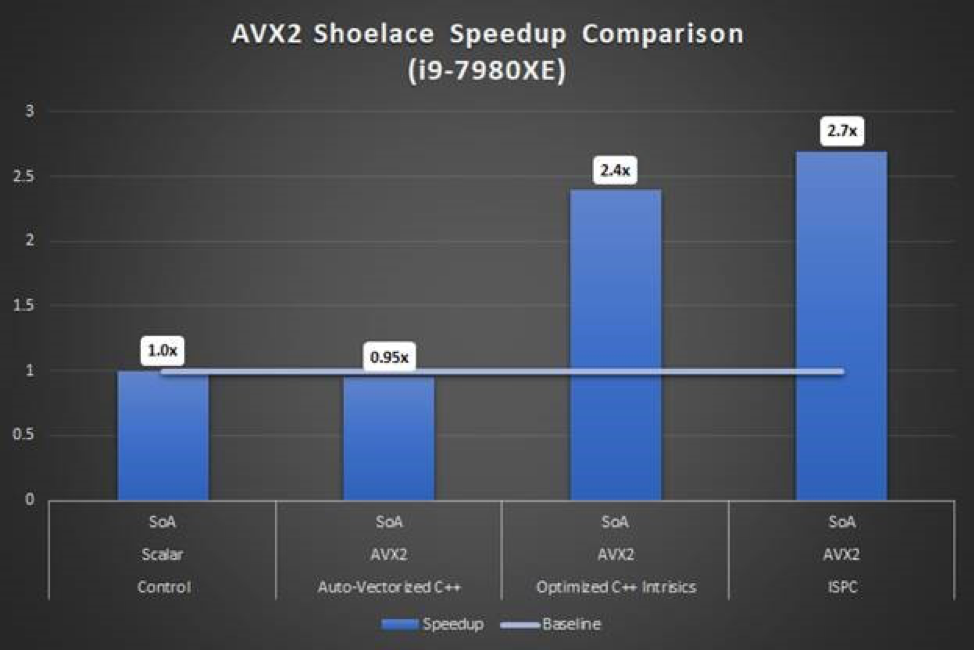 Figure 13. Performance data shows Intel® ISPC has near identical performance to hand-coded intrinsics. Both are faster than naïvely enabled auto-vectorization.

Our test algorithm was memory-bound. Nonetheless, even in a memory-bound application, Intel ISPC and/or hand-optimized C++ are faster than scalar or naïve enabling of auto-vectorization.

It takes significant time and effort to learn an instruction set, and its corresponding compiler intrinsics. For programmers new to writing intrinsics, achieving working and efficient code is time-consuming. And once an algorithm or system is coded in intrinsics, further effort is required to port it to another instruction set.

However, we spent several hours writing tests for the various SIMD ISAs in C++ intrinsics, and were able to write these tests in Intel® ISPC in a matter of hours. Creating subsequent tests for different ISAs was as easy as changing a command line option.

Our testing demonstrated that, for this algorithm, Intel ISPC-generated code performance is on par with hand-coded compiler intrinsics. We also learned that Intel ISPC code is significantly easier to read than C++ intrinsics. In terms of readability, portability, performance, and time savings for new code it pays to spend a short while learning a new language: Intel ISPC.