Over the past 10 years, CPU chips in the PC market have shown great improvements. According to a software and hardware investigation by Steam*2, 4-core processors (usually 8 logical cores) have become mainstream in the current PC game market. The 6-core processor (usually 12 logical cores) is already on its way to become the mainstream next-generation CPU. For example, the Intel® Core™ i7-8700K processor with 8 or more physical cores has been available since late 2017. We expect this trend to continue. In the next few years, 6-core and 8-core CPUs will become the most popular processors for gamers.

In many PC games, rendering is usually single-threaded and easily becomes the biggest performance bottleneck. This makes it difficult for games to utilize extra idle cores in a multicore processor to improve game performance or enrich game content. Although DirectX 12* has been around a few years, most of the games currently under development—especially the most popular online games — are still using DirectX 11. DirectX 11 is designed to support multithreading from the beginning1. Therefore, investigating the performance scalability of DirectX 11 multithreaded rendering on current mainstream multicore platforms, and studying the methods of making full use of this feature have important reference value for the development and optimization of the majority of games.

First, let's briefly review the DirectX 11 multithreaded rendering model (see Figure 1). DirectX 11 supports two types of rendering— immediate and deferred, based on two Direct3D* 11 device contexts — the immediate context and the deferred context. Immediate rendering calls draw APIs through immediate context, and the generated command is immediately sent to the graphics processing unit (GPU). Deferred rendering calls draw APIs through deferred context, but only records the draw commands in a command list that is submitted to the GPU by the immediate context at another time point. DirectX 11 supports the use of different deferred simultaneous contexts in multithreading. This strategy allows the rendering of complex scenes to be divided into multiple concurrent tasks; that is, multithreaded rendering. 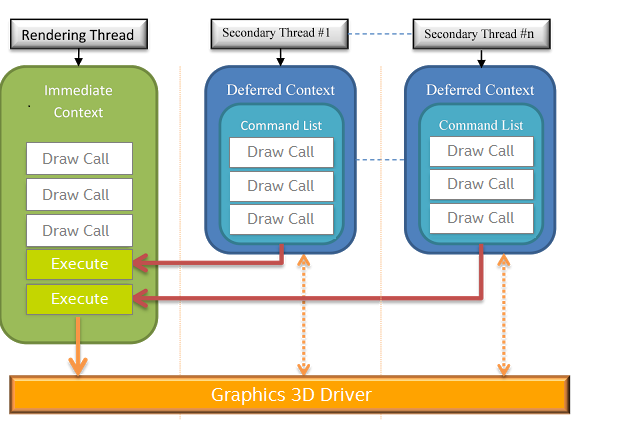 Based on the hardware and software configuration of Table 1, we evaluate the performance scalability of DirectX 11 multithreaded rendering on multicore CPUs.

The evaluation uses the Intel Core i7-6950X processor (10 physical cores; that is, 20 logical cores) to simulate CPUs with different numbers of cores. To ensure that the GPU does not become a performance bottleneck for the test program, the test uses two high-performance discrete GPUs: NVIDIA GeForce* GTX 1080 and AMD Radeon* RX Vega 64. The test program uses the MultithreadedRendering11 routine in the Microsoft DirectX SDK*4, which is based mainly on the following considerations. First, the program performance is CPU-bound, and it is developed to demonstrate the DirectX 11 multithreaded rendering feature, which is conducive to maximizing the potential of performance scalability. Second, the main function of the program is rendering (each frame contains more than 4,000 draw calls), and there is no impact of animation, physical load, and so on. It can make scalability a result of DirectX 11 multithreaded rendering as much as possible. In addition, the program's scene complexity and rendering technology are pretty common in games, so that the test results are of representativeness. Last, but not least, the source code of the program is open, making it easy to analyze and understand the DirectX 11 multithreaded rendering methods, and the impact on scalability performance. 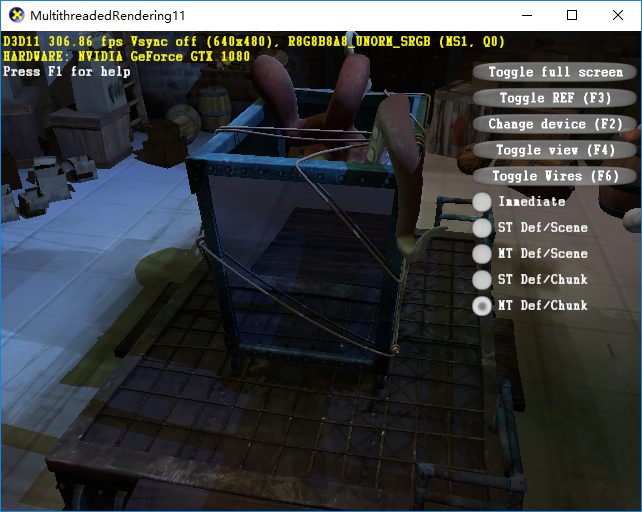 When running the test program, we chose the MT Def/Chunk mode, because the scalability in this mode is not limited by the number of game rendering passes (or scenes), but only by the number of CPU cores. The workload of each thread is relatively balanced, which can make full use of the computing power of the multicore CPU. During the test, we adjusted the CPU's active core number through the BIOS and tested the program's frame rate at each of these different core numbers. In order to compare the effects of different GPUs on DirectX 11 multithreaded rendering scalability, we divided the multithreaded frame rate on the same GPU by the single-threaded frame rate (immediate mode) under the same configuration, to obtain a normalized relative performance metric. The test results are shown in Figure 3.

As we can see from Figure 3, with two CPU cores, no matter which GPU we use, multithreaded rendering (MT Def/Chunk mode) performance is lower than single-threaded rendering (immediate mode). What leads to this result? According to the source code of the test program, the number of working threads is the number of CPU physical cores minus one. In other words, on a two-core CPU, in multithreaded rendering mode, only one working thread processes all scene draw calls based on deferred rendering, while the main thread does not assume any scene draw calls. In the single-thread rendering mode, all draw calls are processed by the main thread based on immediate rendering. This means that the overhead of deferred rendering is slightly larger than that of immediate rendering on the basis of handling an equal number of draw calls.

By checking the GPU driver support for DirectX 11 multithreaded rendering features3 (see Figure 7) through the DirectX Caps Viewer, we learn that the NVIDIA GPU driver supports driver command lists, while the AMD GPU driver does not support them. This explains why the driver modules on different GPUs appear in different contexts. When paired with the NVIDIA GPU, working threads can build driver commands in parallel in a deferred context; while when paired with the AMD GPU, the driver commands are all built in serial in the immediate context of the main thread.

Based on the above tests and analysis, we can draw the following conclusions:

1) Assign each thread a rendering Pass.

2) Assign each thread an equal amount of Chunk.

Figure 8 shows a multithreaded rendering method that divides the rendering task by Pass. Pass is a relatively independent rendering task. The typical Pass includes the generation of pre-Z buffers, shadow maps, reflection maps, G buffers, UI, and the main Pass generating the final frame buffer. With this method, each Pass is assigned with a working thread. A command list of this Pass is built into this working thread. The main thread is responsible for distributing Pass and orderly submitting the command list completed by the working threads. In the MultithreadedRendering11 routine, the main thread will orderly submit after all the working threads complete the command list. Figure 8 shows a better way: When a command list is completed, it should be immediately submitted to the GPU as long as the rendering order permits. Since the submitted command list is usually serial and associated with some overhead, the earlier the submission, the more serial time that can be shielded, which allows GPU processing in advance.

Dividing rendering tasks by Pass is easy to apply to the multiple-pass rendering technology commonly used in modern games. As long as Pass contains a relatively large amount of rendering load (draw call number), using this method in games is usually effective in improving performance. The shortcoming is that the performance scalability is limited by the number of Passes, and it is not easy to achieve load balance between Passes.

The multithreaded rendering method that divides rendering tasks by Chunk can achieve a significant performance improvement, and the performance is not affected by the number of passes and increases with the increase of the number of CPU cores. The shortcoming is that for certain situations that require orderly rendering (such as rendering semi-transparent objects), the strategy of distributing Chunks is limited, and it is easy to lose the load balance among the threads, thereby affecting the performance scalability.

No matter which of the above multithreaded rendering methods is used, the following points should be noted:

Here we introduce multithreaded rendering methods and effects achieved in a real DirectX 11 game. Conqueror's Blade5 is a large-scale online game developed by NetEase*. The game has large-scale outdoor battle scenes, a large number of characters on the same screen, and rich visual effects. These characteristics make the game demand more CPU resources. To enable players on the low-end CPU platforms to have a smooth gaming experience, developers continue to optimize the game engine for multithreading optimization in order to improve performance by fully utilizing CPU resources, or to improve game details. 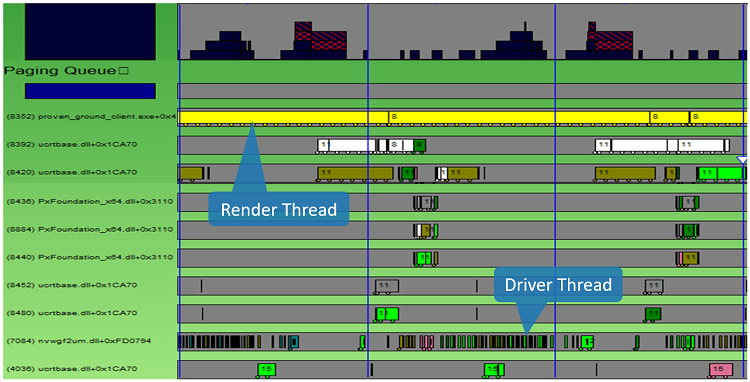 Before the performance optimization of the game, the engine has achieved a certain amount of multithreading: some CPU-intensive tasks, such as game logic, physics, particles, animation, and other calculations use separate threads for execution. The rendering thread is mainly responsible for visibility detection and running the entire rendering pipeline. Nevertheless, the rendering thread is still a performance bottleneck for the game (see Figure 10). A typical combat scene with more than 5,000 draw calls per frame also results in considerable Direct3D runtime and driver overhead. The game uses the DirectX 11 API and a typical deferred shading pipeline. The task pipeline of the rendering thread is shown in Figure 11.

Based on some considerations such as limitation of game legacy code and implementation time, the game chooses a multithreading optimization method that divides rendering tasks according to Pass, which is a relatively easier implementation choice in a limited time. The specific implementation scheme is shown in Figure 12.

In the optimization scheme, Visibility is removed from the rendering thread and divided into two jobs: eye visibility and light visibility. The GBuffer generation, the shadow map generation, and the forward and transparent Passes that have or may dynamically have a large number of draw calls are also moved out of the rendering thread and encapsulated as a job that dispatches working threads. GBuffer generation has been further divided into three jobs: GBuffer Terrain, GBuffer Static, and GBuffer Dynamic, because there are too many draw calls. The rendering thread only retains the Scaleform UI. Deferred Shading and Post Process Passes must use immediate context rendering or have only a few draw calls.

After the multithreading optimization is complete, the bottleneck of the rendering thread is eliminated, the multicore utilization is significantly improved (see Figure 13), and the frame rate is increased by an average of 1.7 times than before the optimization. It has achieved the set performance target.

Although the current solution significantly improves performance, there is still a lot of room for improvement in CPU utilization due to an uneven load between Passes. Therefore, in order to make the idle CPU further enhance performance details in games, the developers will rebuild the rendering code of the game engine and try to divide the multithreading optimization of the rendering task by Chunk.

1. Introduction to Multithreading in Direct3D 11

3. How To: Check for Driver Support