It is becoming apparent that future computing systems will be heterogeneous. The Matrix Algebra on GPU and Multicore Architectures (MAGMA) project at the University of Tennessee is developing a dense linear algebra library similar to the Linear Algebra Package (LAPACK), but for heterogeneous architectures, like current CPU and GPU systems. MAGMA stands out as an obvious candidate when you look for a sparse solver code sample that gives good performance across different architectures. This article describes the use of the Intel® DPC++ Compatibility Tool to migrate MAGMA for CUDA* code to Data Parallel C++ (DPC++).

Migration can happen in two ways. The first method is file-to-file manual migration, which is a good choice if you are migrating a few files. The second method is to create a JSON file for projects that use Make or CMake commands. MAGMA has a makefile, so this article focuses on the JSON approach.

The build options of the input projects files (that is, include path and macros definitions) are collected in a JSON file. The file is generated using the intercept-build Make command (be sure to use Make 4.0 or later). Next, run the dpct command, which has a handful of flags to help with migration. Use the following command line to migrate MAGMA code.

The next step is to interpret the output after you run dpct on the application. The dpct annotates places in the code where modifications may be necessary to make the code DPC++ compliant or syntactically correct.

For large projects, it is advised to redirect the migration logs to a file. To learn how various error codes and diagnostics are reported by the tool, see Diagnostics Reference.

Figures 1 and 2 show a successful migration of a kernel call from the MAGMA library. Since the migration is done with the keep-original-code flag, the original code is also present in the migrated file (Figure 2). 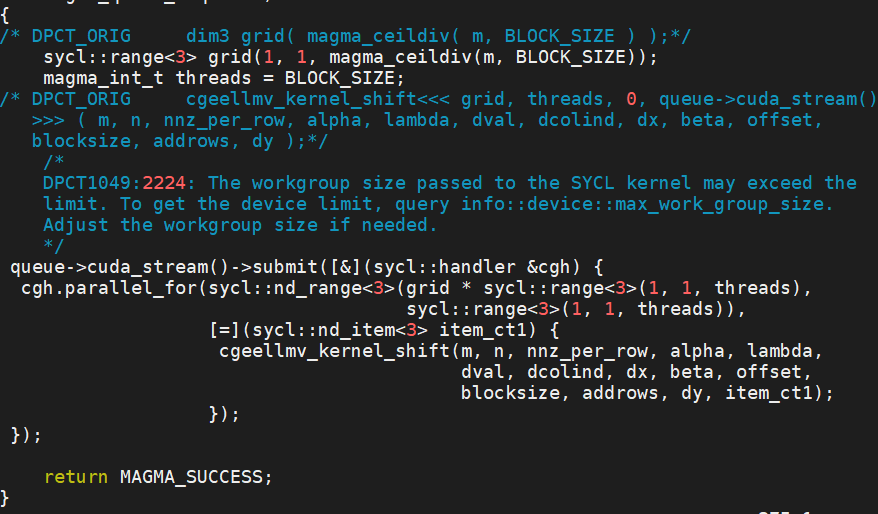 Some manual effort is required to migrate functions that the tool cannot migrate, but annotations generated by the tool help.

Figure 3. Annotations generated by the tool

Sometimes, there are multiple annotations for a line of CUDA code.

Some CUDA libraries have equivalent functions in libraries for oneAPI (for example: oneAPI Math Kernel Library, oneAPI Deep Neural Network Library, and oneAPI Video Processing Library). The Intel DPC++ Compatibility Tool can migrate many CUDA library functions to their oneAPI equivalents. The tools call out those functions that cannot be migrated directly. It is often possible to manually implement the same functionality. For example, the CUDA cusparseDcsrmv function can be manually migrated using a combination of oneMKL mkl::sparse::gemv and mkl::sparse::set_csr_data functions.

The Intel DPC++ Compatibility Tool is evolving every day with input from users. Some of the known issues with the tool are stated in the Known Issues and Limitations section of the release notes.

The Intel DPC++ Compatibility Tool reduces the time and effort required to migrate CUDA applications to DPC++. It gives helpful annotations and warnings to minimize the manual effort required for sections of code that are not migrated by the tool. Migrating MAGMA from CUDA to DPC++ would have been a tedious job without this tool.

If you are interested in migrating a CUDA application to DPC++, get started with this online training. The Intel DPC++ Compatibility Tool is available as part of Intel® oneAPI Base Toolkit.