What's Inside the Box?

Before we look at the hash function, also known as Receive Side Scaling (RSS), and flow director filters let's locate them within the Intel® Ethernet Controller 700-Series based Network Adapters:

Hash and flow director filters are located at the end of the pipeline, close to the host interface, and define destination queues for packets.

There is a lot of pre-processing that happens before a packet enters the hash/flow director filters:

What Kind of Packet Type is it?

There is another important characteristic of a packet defined at the packet parsing stage - Packet Classifier type or PCTYPE.

What is the difference between PCTYPE and PTYPE? PCTYPE defines the packet generic nature, for example, IPv4 TCP and IPv6 TCP are different PCTYPEs.

Each PCTYPE has its own configuration of filters. For example, IPv4 TCP and IPv6 TCP can be distributed to different queue regions by hash filter if needed.

Intel Ethernet Controller 700-Series supports up to 64 different PCTYPEs with only a few defined by default:

PTYPE defines the sequence of headers, detected by the parser, for example, IPv4 TCP packet over IPv6 VXLAN.

The Intel Ethernet Controller 700-Series supports up to 192 different PTYPEs. Packet type is reported at the corresponding 8-bit field of the RX descriptor, so the software can use this field to start processing without parsing all of the packet's headers.

What size is the "field" and how many "fields" does the field vector consists of?

Each field is 16-bit in size and there are 64 of these fields in the field vector. These 16-bit units are also known as "words". The parser and filters always work in words boundaries.

Let's take a simple UDP packet with one VLAN tag:

Or in hexadecimal view:

After the parser processes this packet and extracts all fields, the field vector will look like this:

The eight words from 50 to 57 are special - they can be used to store up to 16 bytes of the payload of the last recognized layer. For example, when the parser hits unknown Ethertype and does not know what to do with it, then the L2 payload (bytes right after Ethertype) can be extracted here. If the parser stops at L3, for example, it hits unknown IP protocol, then IP payload (bytes right after the IP header) can be extracted here. For known IP protocols: UDP/TCP/SCTP, bytes after corresponding L4 headers can be extracted. Configuration of the bytes to be extracted is flexible, these 8 words can be extracted from any 3 locations in the first 240 words of the payload. But there is a trick - the same 8 fields are also used for tunneled packets, for example, VXLAN or GTP, to store the outer IP Destination address. So, if flexible payload extraction is enabled, then it overwrites outer IP destination address for tunnels.

By default the Intel Ethernet Controller 700-Series out-of-box configuration has the payload extraction disabled, so outer destination addresses for tunnels can be used. Data Plane Development Kit (DPDK) versions 2.2 to 17.11 force extraction of the first 8 words (16 bytes) for all layers, overwriting outer destination address. This behavior was changed in DPDK 18.02 and the payload extraction is only turned on if needed.

For more details on the fields for different protocols see "Field Vector" chapter in the Intel® Ethernet Controller XL710 datasheet.

Direction of the Vector

Now look at how the field vector is used by hash and flow director filters to decide which queue packet should be directed.

As we mentioned above, each PCTYPE has its own filter configuration space. The combination of the fields used as an input set for a filter, and for existing PCTYPEs is defined as follows:

The internal input set is just a 64-bit register defining which fields of the field vector should be used by the filter.

In addition to input set registers, each PCTYPE has two registers which can be used to mask out some bits of the field.

For example, IPv4 header has Type of Service (TOS) field which is 8 bit wide and located in the lower 8-bits of the first word of the IPv4 header. This word is extracted to field 9 of the field vector. If the application wants to use TOS for a filter (flow director or hash), it can include word 9 to the corresponding input set and then mask out high 8-bits, so only the TOS field will be used by the filters.

First, the last 6 words of the field vector are reserved and must not be used, limiting the number of valid fields to 58.

Second, flow director and hash filters use Toeplitz hash function to calculate hash signature, and the input set of this function is limited to 48 bytes or 24 words.

When constructing the input set, the application should take care not to select more than 24 words for the set. But, as usual, there is an exception. For the hash filter, if Simple XOR hashing function is selected, the input set can include any number of fields.

The DPDK 18.02 introduces a few low-level functions in rte_pmd_i40e.h file, which can be used to control input sets and masks per PCTYPE:

Assigning a destination queue to a packet is just one of the Flow Director actions, others include:

In total Intel Ethernet Controller 700-Series support up to 8K flow director exact match rules. When the application creates a rule, it can supply a cookie (tag) with the rule, a 32-bit value, which will be reported on the packet's RX descriptor.

Hash filter, also called RSS, does what it says - calculates the hash signature of the input set.

The calculated hash signature is then used to select the destination queue and also posted to the RX descriptor to be used by software, if needed.

The diagram below shows how the hash filter works:

Fields, selected as the hash input set, are used to calculate a 32-bit hash value. Then, depending on indirection table size, 'n' of the least significant bits of the hash value is used as an index to the indirection table. For example, a PFs table can have 512 entries, so 9 LSBs will be used as an index. Each entry of the table contains a destination queue index. By default, the indirection table is initialized by the driver evenly, for example, if 4 queues are used for RSS, then the table entries will be initialized as 0,1,2,3,0,1,2,3...0,1,2,3. But the application can change this distribution at any time. In figure 2 the last three entries point to the same queue 3.

As long as the hash input set values are the same, hash value will be the same, so all packets from one flow will always go to the same destination queue.

The hash filter can be configured per PCTYPE, so some tricks can be played by applying different configurations to different PCTYPEs.

Initialize a port with the single RX queue or configure the indirection table to point to queue 0. The hash filter will calculate the hash value and post it on the RX descriptor.

Separate IPv4 TCP packets from any other IP protocols.

Disable the hash filter for all PCTYPEs except IPv4 TCP and set up the indirection table so it will not have any entries pointing to queue 0.

Port receive queues can be grouped to different regions. Up to 8 regions can be defined. Each region can contain 1,2,4,8 or 16 queues and start at any queue index, so regions can overlap. By default, all PCTYPEs are assigned to region 0.

Queue regions can be configured by:

Figure 3 shows how queue regions can be used to separate different PCTYPEs: 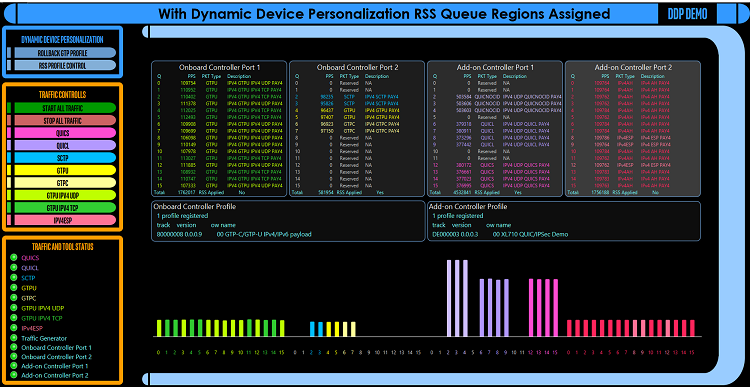 Regions can be changed dynamically, for example, GTP-U region can be set to 4 queues 8-11 initially and then increased to 8 queues 8-15 if needed.

Just watch for flows, which could jump from one queue to another when changing region size.

As all the packets defined as separate PCTYPEs they can be directed to different queue regions as well.

Mix hash and other filters

Note: The packets in the queues 5 to 7 do not have hash signatures as switch filter bypasses RSS.

Let's take, for example, the following mapping of QCI to DSCP field from IPv4 header:

We want to direct a QCI to corresponding RX queue: QCI1 to queue 1, QCI2 to queue 2 and so on.

The first 8 words of the IPv4 header are extracted to words 9 to 16 according to the “Field Vector” chapter in the Intel Ethernet Controller XL710 datasheet.

DSCP uses 6 upper bits of the second byte of the IPv4 header, so we need to use the first word of the header as hash filter input set and mask out all unused bits to get DSCP value.

With only DSCP bits present, word 9 of the field vector will have the following values:

Andrey Chilikin is a software architect working on the development and adoption of new networking technologies and solutions for telecom and enterprise communication industries.