When the public thinks of Intel, many people naturally think of processors and other chips, not software. But Intel has large teams of software engineers working directly with independent software vendors (ISV) to apply AI and machine learning and other Intel® software optimizations to help accelerate performance and resolve customer challenges.

A recent project with Autodesk* (a major player in professional graphics creation) incorporated the Intel Open Image Denoise library (a component of the Intel oneAPI Rendering Toolkit) into the Arnold renderer v7. For details on the version, see What's New in Arnold. One of the main themes of Arnold v7 for enhancing creative content and graphics development was improving performance and interactivity.

“There are a lot of improvements around this topic in all the releases we've done this year and in Arnold 7.”

“The integration of Intel's Open Image Denoise is completely part of this performance play. With stochastic path tracers like Arnold, noise is the main thing we are fighting, and being able to remove the noise without altering the quality of render is a big shortcut. This applies to final frame renders, and Cinesite recently used Intel's denoiser in production to cut down their render times significantly with Arnold. But it's also useful when you do not need the highest quality when speed is more important. For dailies, for example, for being able to do more iterations at a level of quality that is not final but good enough to make creative decisions. The quality of OIDN's denoising is really good, but it's also very fast, and in fact, fast enough to allow noise-free interactive rendering in some use cases. This is impressive.” 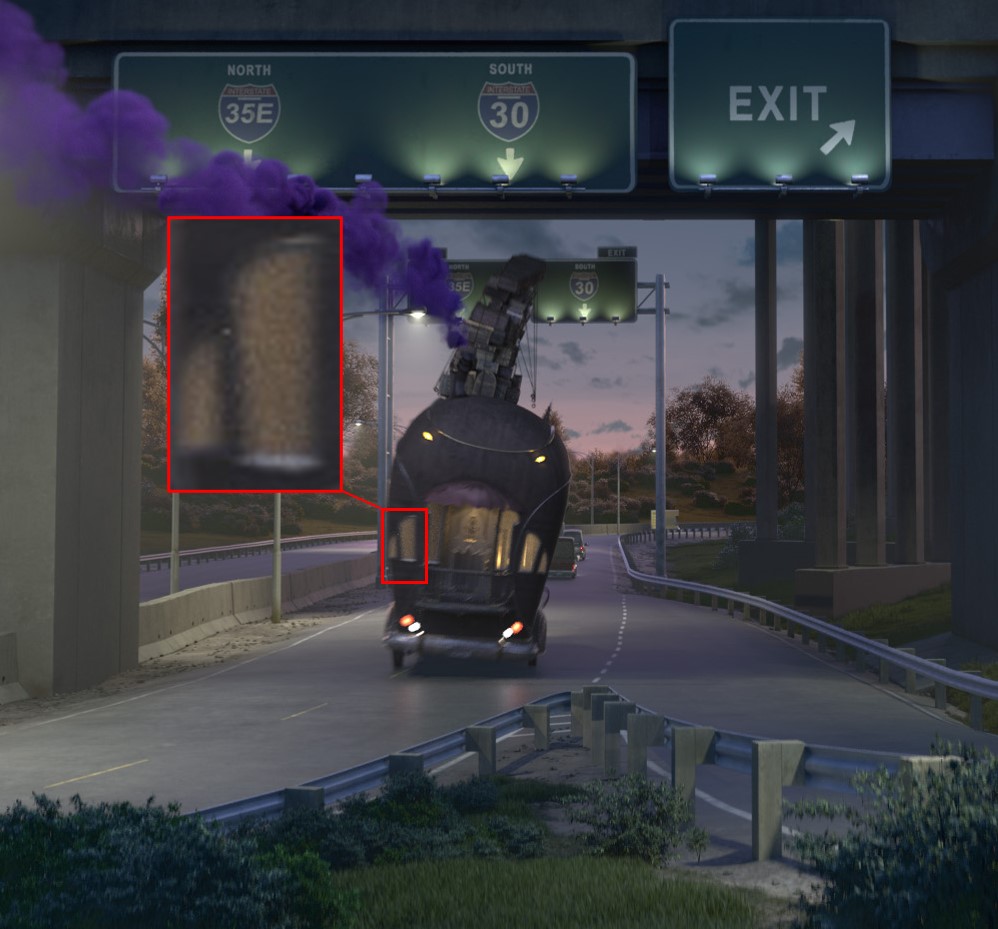 Before rendering. For details, see the case study.

Intel completed work on applying AI and machine learning to speed up denoising. It is a step in the graphics creation process that precedes and complements the high-resolution rendering of the final image. 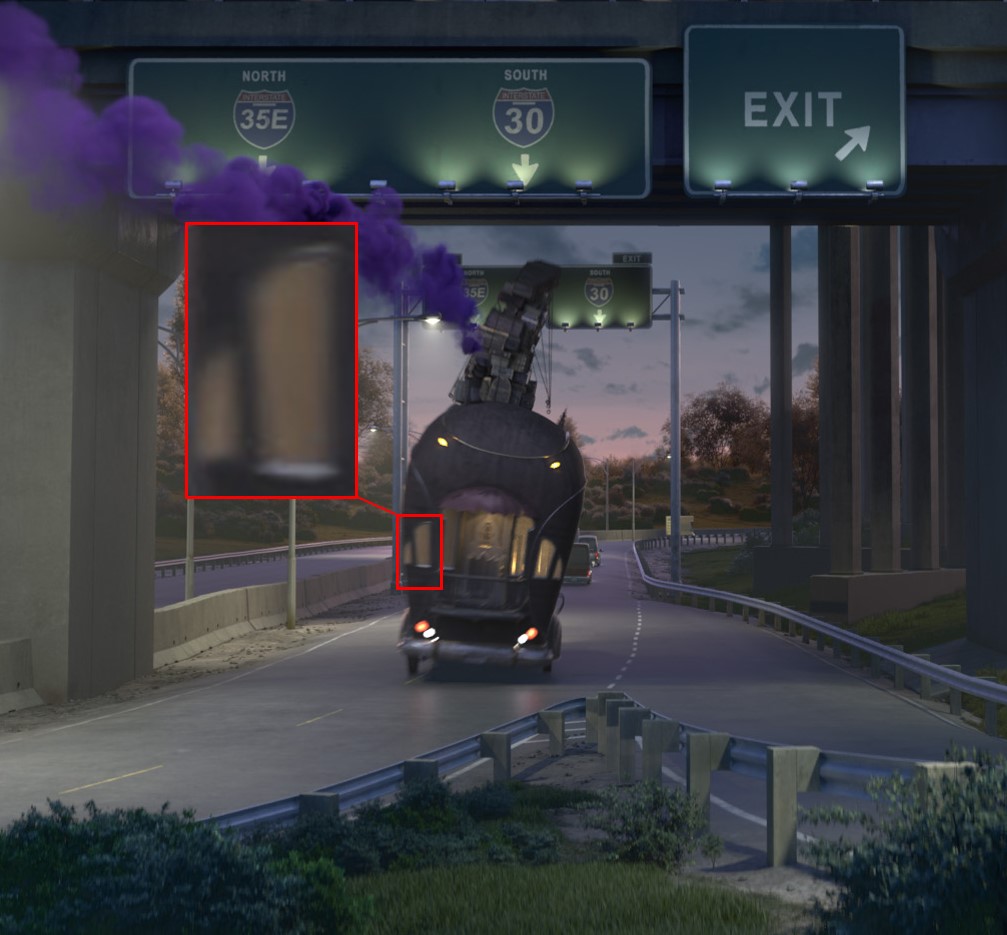 "Our final estimates are that we made about a 20-percent savings, part-way through the project," Driskill said. For details, see Use AI To Scrub Image Noise (and Save Money) In The Addams Family 2.

Says Chang, “We used Intel's denoiser on every shot of The Addams Family 2 and were able to gain a 10% to 20% — and sometimes 25% — efficiency in rendering, saving thousands of hours in rendering production time. That allowed artists to focus more on the creative aspect of moviemaking. Which meant they were able to spend their time lighting shots and making the visuals more intricate and complex, rather than spending time troubleshooting sample noise.”

Efficiency gains were due to optimizations by using Intel Open Image Denoise software.

The Intel Advanced Rendering and Visualization Architecture team created machine-learning models that detect noise in an image, including variations in light or color, shadows, specks, and other problems. The Intel team trained the machine-learning model by feeding the neural network tens of thousands of images, teaching the model to recognize issues and quickly optimize the image. The algorithm checked an image's shapes, textural detail, and patterns from render and pixel noise and cleared away the noise.

Denoising is a step that animators use in both final rendering and during the iteration stage to save time and deliver high-fidelity productions. In the latter case, denoising analyzes an image before moving to the compute-intensive rendering stage, similar to a writer creating a rough draft for an editor to look at. A good denoiser—and Intel has pioneered the use of machine learning in a CPU-based denoiser—can identify issues in an image and quickly resolve many of them. This allows the animator to decide if the image needs more work before it is sent to the more time-consuming rendering step. Saving compute time saves money and allows a movie director to meet production deadlines with higher-quality images.

The flexible C/C++ API in Intel Open Image Denoise makes integration easier. In this particular case with Arnold, only 10 lines of code were added. Prefilter was enabled for enhanced quality. And because AI and machine learning enables an application to keep learning as more data is run through the model, the denoiser from Intel keeps improving its ability to clean up images quickly.

It's important to speed up the final rendering stage: It determines how quickly a denoiser does its job. ISVs such as Autodesk are putting more focus on interactivity. An artist working on a scene wants to decide whether to continue tweaking or move the image along to the final rendering stage. The denoiser helps the animator decide if the scene is worthy of going all the way to the final rendering. It doesn’t have to be a high-end image, but the animator wants to see a cleaned-up version so they can make a decision right away. Then, when the artist has finished the scene, it can be sent off to the rendering farm—constantly running hundreds of Intel® Xeon® processors—for the final output. The denoise function is critical in interactive rendering as well as final rendering.

Given the rise in popularity of GPUs, you might be asking, “Why are we still talking about CPUs?” The fact is that almost all high-quality rendering for the film is done on CPUs, and for several good reasons.

First, GPUs only go fast when everything is in their local memory. Film studios routinely render final scenes over 100 GB, which is too large for GPU memory.

Second, GPUs are designed to do the same thing to a lot of data at once. However, ray tracing is incoherent (each ray can go a different direction, intersect different objects, shade different materials, access different textures), and this access pattern degrades GPU performance significantly, unlike CPUs.

Finally, high-end rendering often relies on complex shading networks, so often ray tracing is not the dominant cost. This is further complicated by the fact that there are often dependencies on third-party shaders that cannot be ported readily to the GPUs.

Intel Open Image Denoise has two important advantages: It runs on ubiquitous CPUs and it is AI based. It's fast, high quality, and CPU-powered. This is a new solution that gives users more options. Previous CPU-based denoisers were slow, primarily because they were not AI based. With Intel Open Image Denoise, denoising is almost instant, which means artists can perform CPU-based interactive rendering and accelerate the rendering workload to speed up production.

¹Testing date: Results are based on data conducted by Cinesite in 2020–21.10% to up to 25% rendering efficiency, thousands of hours saved in rendering production time, and 15 hours per frame per shot to 12–13 hours. Cinesite configuration: 18-core Intel® Xeon® Scalable processors (W-2295) used in the render farm, workstations based on 2nd generation Intel Xeon processors (W-2135 and -2195) used. Rendering tools: Gaffer, Arnold, and optimizations by Intel Open Image Denoise.

Performance varies by use, configuration, and other factors. Learn more at www.Intel.com/PerformanceIndex​

Other names and brands may be claimed as the property of others.

Learn about oneAPI, download additional Intel® oneAPI tools or use in the Intel® DevCloud.