BigDL is a distributed deep learning library for Apache Spark*. Using BigDL, you can write deep learning applications as Scala or Python* programs and take advantage of the power of scalable Spark clusters. This article introduces BigDL, shows you how to build the library on a variety of platforms, and provides examples of BigDL in action.

What Is Deep Learning?

Deep learning is a branch of machine learning that uses algorithms to model high-level abstractions in data. These methods are based on artificial neural network topologies and can scale with larger data sets.

Figure 1. Deep learning as a pipeline of feature extractors

BigDL is a distributed deep learning library for Spark that can run directly on top of existing Spark or Apache Hadoop* clusters. You can write deep learning applications as Scala or Python programs.

What Is Apache Spark*?

Spark is a lightning-fast distributed data processing framework developed by the University of California, Berkeley, AMPLab. Spark can run in stand-alone mode, or it can run in cluster mode on YARN on top of Hadoop or in Apache Mesos* cluster manager (Figure 2). Spark can process data from a variety of sources, including the HDFS, Apache Cassandra*, or Apache Hive*. Its high performance comes from ability to do in-memory processing via memory-persistent RDDs or DataFrames instead of saving data to hard disks like traditional Hadoop MapReduce architecture.

You may want to use BigDL to write your deep learning programs if:

Note: This article provides instructions for a fresh installation, assuming that you have no Linux* tools installed. If you are not a novice Linux user, feel free to skip rudimentary steps like Git installation).

To install the toolchain on Oracle* VM VirtualBox, perform the following steps:

When you’re done, you’ll see a new subdirectory called BigDL, which contains the BigDL repository. You must also install Apache Maven, as shown below, to compile the Scala code:

This section shows you how to download and build BigDL on your Linux distribution. The prerequisites for building BigDL are:

After installing Maven 3, set the environment variable MAVEN_OPTS as follows:

When compiling with Java 7, you must add the option -XX:MaxPermSize=1G.

It is highly recommended that you build BigDL by using the make-dist.sh script.

When the download is complete, build BigDL with the following commands:

After that, you can find a dist folder that contains all the files you need to run a BigDL program. The files in dist include:

It is strongly recommended that you use Java 8 when running with Spark 2.0. Otherwise, you may observe poor performance.

Prior to running a BigDL program, you must do a bit of setup, first. This section identifies the steps for getting started.

To achieve high performance, BigDL uses Intel MKL and multithreaded programming. Therefore, you must first set the environment variables by running the provided script in PATH_To_BigDL/scripts/bigdl.sh as follows:

Alternatively, you can use PATH_To_BigDL/scripts/bigdl.sh to launch your BigDL program.

Working with the Interactive Scala Shell

You can experiment with BigDL codes by using the interactive Scala shell. To do so, run:

For instance, to experiment with the Tensor application programming interfaces (APIs) in BigDL, you can then try:

For more details about the BigDL APIs, refer to the BigDL Programming Guide.

You can run a BigDL program—for example, the VGG model training —as a local Java program that runs on a single node (machine). To do so, perform the following steps:

You can run a BigDL program—for example, the VGG model training — as a standard Spark program (running in either local mode or cluster mode). To do so, perform the following steps:

In general, installation on Mac OS* is simpler than within a windows VM, since Mac OS is Unix-based. However, the command syntax is obviously different. Here are some notes:

If maven is not installed, install it via the following command

Currently, BigDL uses synchronous mini-batch SGD in model training, and it will launch a single Spark task (running in multithreaded mode) on each executor (or container) when processing a mini-batch:

In Spark 2.0, use the default Java serializer instead of Kryo because of Kryo Issues 341: “Stackoverflow error due to parentScope of Generics being pushed as the same object” (see the Kryo Issues page for more information). The issue has been fixed in Kryo 4.0, but Spark 2.0 uses Kryo 3.0.3. Spark versions 1.5 and 1.6 do not have this problem.

On CentOS* versions 6 and 7, increase the max user processes to a larger value, such as, 514585. Otherwise, you may see errors like “unable to create new native thread.”

Currently, BigDL loads all the training and validation data into memory during training. You may encounter errors if BigDL runs out of memory.

Note: if you’re using a VM, your performance won’t be as good as it would be in a native operating system installation, mostly due to the overhead of the VM and limited resources available to it. This is expected and is in no way reflective of genuine Spark performance. 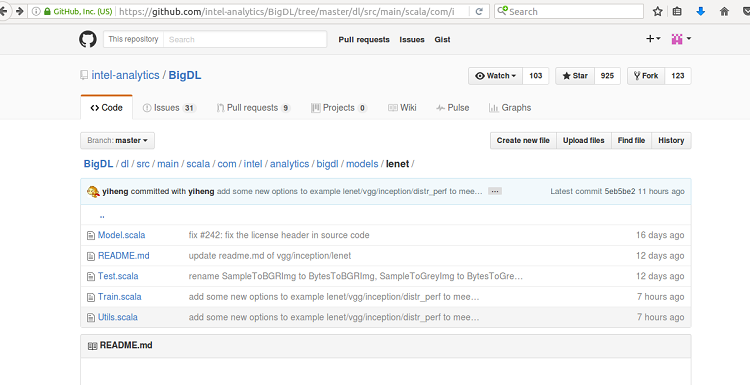 A BigDL program starts with an import of com.intel.analytics.bigdl._. Then, it initializes the engine, including the number of executor nodes, the number of physical cores on each executor, and whether it runs on Spark or as a local Java program:

After the initialization, begin creating the LeNet model by calling LeNet5(), which creates the LeNet-5 convolutional network model as follows:

Next, load the data by creating the DataSet.scala commands (either a distributed or local one, depending on whether it runs on Spark—and then applying a series of Transformer.scala commands (for example, SampleToGreyImg, GreyImgNormalizer, and GreyImgToBatch):

After that, you create the Optimizer — either a distributed or local one, depending on whether it runs on Spark) by specifying the data set, the model, and the criterion, which, given input and target, computes gradient per given loss function:

Finally, after optionally specifying the validation data and methods for the Optimizer, you train the model by calling Optimizer.optimize():

The following command executes the LeNet example from the command line:

The following is an example command of LeNet Spark Local mode on a VM:

Note: For an example of running an Image inference on pre-trained model, see the BigDL README.md.

Run the following command from a command line (this example is for a VM, so memory sizes are set to 1g):

The output of the program is a table with two columns: the *.JPEG file name and a numeric label. To check the accuracy of prediction, refer to the imagenet1000_clsid.txt label file. (Note that the file labels are 0-based, while the output of the example is 1-based.)

The first few lines of the image file are as follows:

The following are the first few lines of the example output:

The image ILSVRC2012_val_00025133.JPEG (Figure 8) has been correctly identified as label 5, which corresponds to the entry “4: ‘hammerhead, hammerhead shark’“ in the imagenet1000_clsid.txt file. 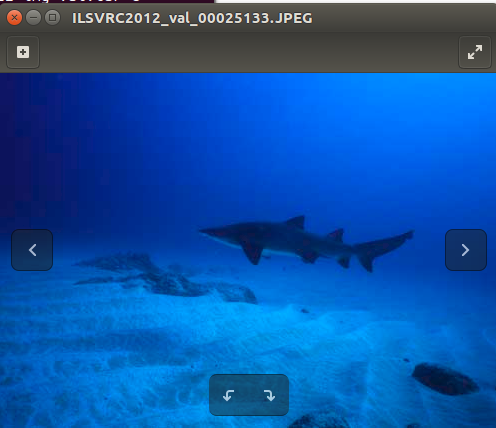 To run the classification example from within the IntelliJ IDE, you must set arguments slightly differently when running in VM, as Figure 9 shows.

Figure 9. The classification example in the IntelliJ integrated development environment

Because the IntelliJ IDE in Figure 9 does not display the entire lines, here are the VM options:

And here are the program arguments:

In addition, BigDL supports more than 100 standard neural network “building blocks,” allowing you to configure your own topology (Figure 10). 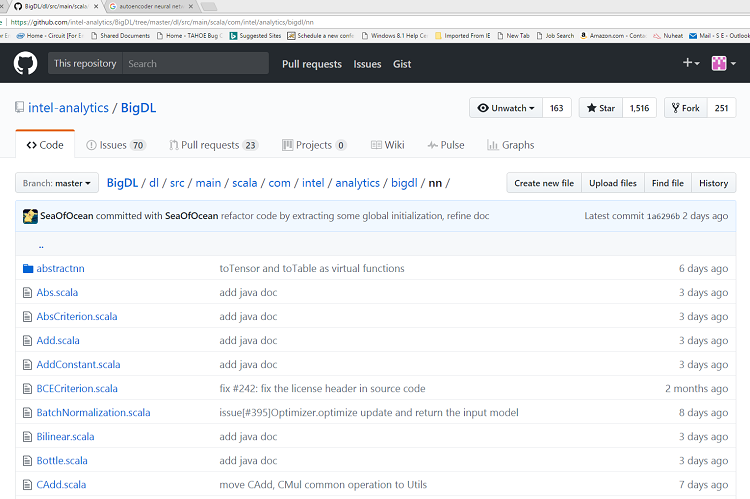 In addition, BigDL comes with out-of-the-box examples of end-to-end implementations for LeNet, ImageNet, and TextClassification (Figure 11). 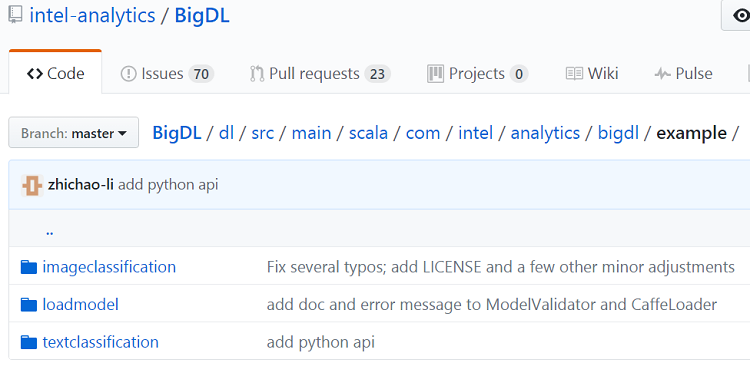