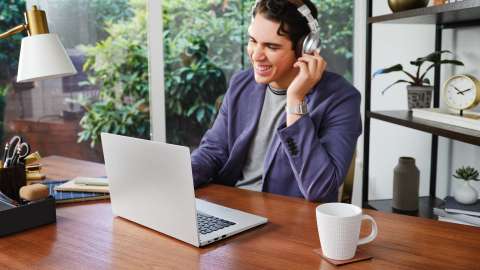 What Is Bluetooth® Technology?

Get to know the fundamentals of Bluetooth technology and Intel’s role in the past, present, and future of the technology.

In 2021, over 4.7 billion Bluetooth® devices were shipped.1 As one of the most common wireless connectivity standards in the world, Bluetooth technology plays an integral part in everyday life. Let’s take a deep dive into what this technology is, how it’s used, and Intel’s role in its past, present, and future.

In 2021, over 4.7 billion Bluetooth® devices were shipped.1 As one of the most common wireless connectivity standards in the world, Bluetooth technology plays an integral part in everyday life. Let’s take a deep dive into what this technology is, how it’s used, and Intel’s role in its past, present, and future.

What Is Bluetooth Technology?

Bluetooth short-range wireless technology enables two devices to connect directly without requiring supporting network infrastructure such as a wireless router or access point. Today, Bluetooth technology is most commonly used by people around the world to connect devices such as wireless headphones, keyboards, mice, and speakers to both PCs and mobile devices.

Bluetooth technology operates on radio frequencies in the 2.4 GHz range. The two Bluetooth standards currently in use today are:

The Bluetooth Special Interest Group (SIG), a standards organization, oversees the development and licensing of Bluetooth technology. Intel is a founding member of the Bluetooth SIG and has played a pivotal role in the evolution and proliferation of the technology. In fact, it was Intel’s own Jim Kardach who suggested the name Bluetooth in 1997—taking inspiration from the 10th-century Swedish king, Harald Bluetooth.

In the early days, many PCs relied on external dongles to connect to Bluetooth peripherals, often using a USB port. This approach provided essential Bluetooth functionality but was often cumbersome to the end user. Today, most PCs feature embedded networking cards with Wi-Fi and Bluetooth functionality. These allow for better performance and coordination across both radio capabilities, helping to prevent interference and ensure adequate data transfer speeds.

As a technology leader, Intel has included integrated Bluetooth functionality in Wi-Fi cards since 2011, including support for Bluetooth 5.3 connectivity. We also continue to work closely with OEMs, accessory manufacturers, and ecosystem partners to define ideal Bluetooth specifications and help implement them into real-world devices and applications. Our goal is to enable simple, high-performance Bluetooth connectivity at attractive prices for PC users.

What Is Bluetooth Technology Used For?

Bluetooth technology is primarily used to wirelessly connect peripherals to mobile phones, desktops, and laptops. Some of the most common Bluetooth accessories include mice, keyboards, speakers, and headphones. Many gaming controllers use Bluetooth technology for wireless connectivity as well.

Additionally, Bluetooth technology is becoming more common in consumer electronics such as cameras, televisions, and even home appliances such as refrigerators or ovens. Medical devices such as glucose sensors or pacemakers rely on Bluetooth connectivity. Modern car infotainment systems also use Bluetooth technology to stream music or directions from the driver’s phone.

To accommodate the wide number of devices that users may want to connect through Bluetooth technology, many contemporary devices are built to support multiple Bluetooth connections at the same time. For example, in a modern work-from-home scenario, users can sync devices such as keyboards and mice with multiple PCs simultaneously and switch between them seamlessly with the press of a button.

For Bluetooth devices, pairing is like exchanging contact information. First, each device registers the pairing information, including the security key, of its partner device. This information is saved on both devices so they can easily connect or automatically reconnect without repeating the initial Bluetooth pairing process.

Depending on the device, the initial pairing process may also involve comparing a string of numbers displayed on both devices to ensure you’ve made the right connection or entering a PIN from one device into the other. These considerations are in place to prevent users from accidentally pairing with the wrong device and to prevent unwanted parties from accessing your Bluetooth devices.

Physical device placement and surrounding conditions are critical to Bluetooth performance. Bluetooth technology can be used to connect devices that are within approximately 30 to 300 feet of each other. The Bluetooth range of your device will depend on factors including environment, interference, and transmission power. Technologies that operate on the 2.4 GHz spectrum—such as older PCs, tablets, phones, and Wi-Fi networks, as well as microwaves and baby monitors—can interfere with Bluetooth performance.

Primarily, Bluetooth technology is used for small data packets and low-latency, burst-based communications between devices; however, it is not preferred for large file transfers because of its limited 2 Mbps data rate.

As with all other kinds of wireless connectivity, security is a top-of-mind consideration for Bluetooth technologists and users. Throughout Bluetooth technology’s long life, its security capabilities have evolved right alongside improvements to performance and expanding use cases. The Bluetooth specification, overseen by the Bluetooth SIG, is periodically updated to enhance security and prevent issues.

Intel® Bluetooth solutions reflect our long-standing investment in the technology. We’re dedicated to making it a seamless, simple, and easy technology that enables headache-free connectivity for PC users everywhere.

As Bluetooth technology continues to evolve and become an even more integral part of everyday life, we continue to unlock technical innovations that enable better experiences for all.

For example, we’ve worked to offload essential Bluetooth audio processing capabilities (e.g., those that would be used to enable wireless headphones) from the CPU to an Intel® low-power audio digital signal processor. This means the CPU can enter a deeper sleep state more often since it’s not tied into supplying the audio signal to the end user device—ultimately allowing the PC to reduce power consumption and extend battery life.

If you’re seeking a truly standout connectivity experience, look to Intel® Evo™ laptops, which are the result of a deep collaboration between Intel and our industry partners. These devices are built to demanding specifications, determined by Intel® Bluetooth experts, to provide an industry-leading experience.

Bluetooth Technology Is Here to Stay

In the future, you can look forward to Bluetooth improvements across range, performance, and reliability as new innovations are applied to the technology. As our wirelessly connected world continues to grow and change, Bluetooth technology will remain a critical part of it.

How Does Bluetooth Technology Work?

Dive deeper into the technical details of Bluetooth technology.

Learn about the Intel® wireless solutions that help keep us connected.

Get the latest drivers for Intel® wireless adapters.

What is Bluetooth technology?

What is Bluetooth technology’s range?

Bluetooth technology can connect devices that are within approximately 30 to 300 feet of each other. The range of your device will depend on factors including the environment, interference, and transmission power.

What is Bluetooth technology used for?

Bluetooth technology is used to connect devices such as PCs and mobile phones to a wide range of peripherals, including mice, keyboards, speakers, appliances, medical devices, and car infotainment systems. Because Bluetooth technology has a limited data transfer bandwidth, it’s commonly used for low-latency, burst-based applications and not large file transfers.

The Bluetooth word mark and logos are registered trademarks owned by Bluetooth SIG, Inc. and any use of such marks by Intel Corporation is under license.