I. How long does record/replay take?

Record/replay overhead is a function of number of memory accesses and the amount of sharing in the test program.

1. Time for recording/replaying a 'region': 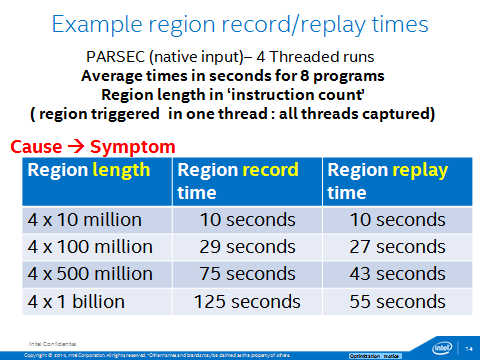 Source: Measured with PinPlay kit 2.0. (we are continuously looking to improve these)

II. Why does PinPlay have a high overhead (especially for recording)?

The design goals of PinPlay were:

As a result, PinPlay works on multiple operating systems 'out of the box' and provides the guarantee that a bug once captured will not escape. However, that comes with a high overhead, especially during recording.

There are two major sources of slow-down in PinPlay (we are continuously looking to improve these):

A shadow memory is implemented during recording. All real memory writes observed in the program are replicated on the shadow memory. Memory reads lead to a comparison of 'real' memory values and 'shadow' memory values and mismatch/missing value leads to an injection being emitted in the *.sel file. At replay time, all memory reads are monitored and recorded memory values are injected if present. The details are described in our SIGMETRICS 2006 paper "Automatic Logging of Operating System Effects to Guide Application-Level Architecture Simulation".

The overhead of this technique is proportional to the number of memory accesses in the program.

The overhead of this technique is proportional to the number of shared memory accesses in the program.