The rapid expansion of the internet in recent years, and its access through mobile devices, has increased user demand for data security. Many network information flows are now encrypted to prevent network attacks such as leaks, phishing, and replay. Google has implemented full-site HTTPS encryption and reported in July 2018 that over 70 percent of the Chrome* data had been encrypted.1

SR-IOV technology has a few disadvantages:

Because of these disadvantages, the encryption accelerator’s virtualization technology should be independent of real machine hardware, and it needs to be expanded. At the same time, the back end (physical machine) can aggregate multiple accelerator resources to complete the rate limit work and QoS. Virtio crypto provides a solution to the problem.

What is Virtio Crypto? 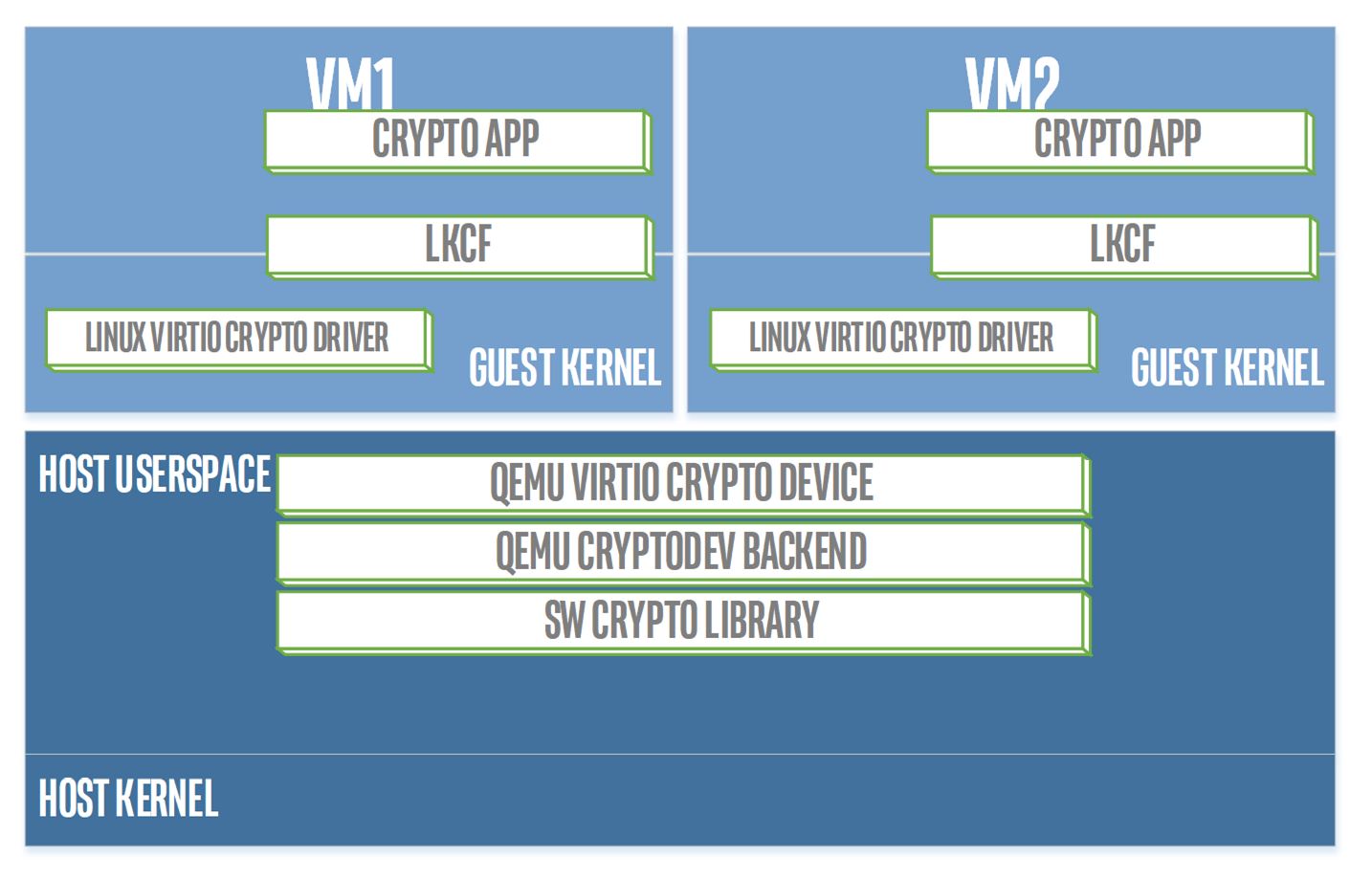 This scheme has two drawbacks:

The current Virtio crypto scheme is inefficient. To solve this problem, Intel proposes a complete scheme based on the Data Plane Development Kit (DPDK) for the front and back ends of Virtio crypto.

The crypto proxy of vhost-user began supporting QEMU in early 2018 so that other client vhost-user applications could accelerate crypto computing. In May 2018, the DPDK-based vhost-user crypto was launched, becoming the first vhost-user acceleration scheme to support crypto devices.

Vhost-user crypto, an extension of the DPDK Vhost library, provides several new APIs and attempts to hide many details of the Vhost and Cryptodev implementation. The following example illustrates how they work.

First, you initialize the host's Cryptodev resources, including devices and queues, to create a mempool session. The host should use a look-aside device with strong encryption performance, such as Intel QAT. If you use cryptodev software, such as AESNI-MB or OPENSSL, the overall performance will be weaker than if using software directly to encrypt the engine on the VM due to the cost of virtio data transmission expenses. For instructions on how to initialize host Cryptodev resources, see the Cryptodev Programmer's Guide.)

Second, as when configuring other Vhost applications, you create a vhost_device_ops instance to register the callback functions of the socket connection at the time of creation and destruction, which are new_device and destroy_device, respectively.

In the new_device () function, you need to do the following:

In standard Virtio crypto, the information exchanged for a session is session_id. In DPDK Cryptodev, the session is a specific piece of data. Therefore, each instance of Vhost crypto will maintain a table to map the relationship of data between the virtio-crypto session_id and the DPDK Cryptodev session, and it will automatically process the requests sent by VM to create and delete sessions. You do not need to intervene; simply provide the Cryptodev ID and sessionmempool when creating the instance.

2. Tell vhost-user crypto to turn on zero copy to improve the processing efficiency. This allows the function to avoid copying and writing back the data when processing a virtio-crypto data request. The function will only carry out the VM » host conversion of the requests’ physical address.

Note: This method has certain limitations. The host system is required to turn on the I/O memory management unit (IOMMU), virtual IOMMU, etc. Also, the AESNI multibuffer crypto poll-mode driver (MB PMD) is not supported on the host side, and physical discontinuity of the data memory is not supported. In the VM, LKCF conducts a feasibility test after initializing each device, including the accuracy test of a scatter/gather list. When turned on, zero copy causes the VM’s device driver to fail this test, resulting in initialization failure. Therefore, the host side must wait for LKCF test completion before turning on zero copy.

The vhost-user crypto API is easy to use, decouples front and back ends, has high extensibility, and more. ZERO COPY can greatly improve performance and can be easily integrated into the application of complex virtual crypto resource services. However, due to the limitations of the Virtio crypto Linux driver and QEMU proxy, only AES-CBC and SHA1-MAC algorithms are currently supported. The increase of supported algorithms in the future will fuel further development of vhost-user crypto.

To solve the slow-performance problem of LKCF, we added the virtio-crypto PMD based on Virtio User to the Cryptodev Framework of DPDK. The PMD shares the same control plane and data plane API with other DPDK crypto PMDs, except that it works in a VM or container.

To use the PMD, you start the Vhost crypto application, create a UNIX socket file, and pass its QEMU to the VM. An example of the QEMU command is as follows:

In VM, the Linux kernel will bind the device to a virtio-crypto device by default. You need to bind the virtio device transferred from QEMU to the UIO-PCI-GENERIC driver. Assuming that the device has a PCI address of 0000:00:04.0, you rebind it with the following command:

Then, you can use it in the DPDK like other Cryptodev PMDs, and experience the acceleration of the host side.

Introduction to the Crypto API in the DPDK Vhost Library

Roy Fan Zhang is an Intel® software engineer who is mainly engaged in DPDK development and virtualization.