This article is out-dated and requires an update to reflect latest changes in hardware and software technology. Further documentation on Intel® IPP can be found at Intel® Integrated Performance Primitives – Documentation.

This paper examines how to use Intel® SSE to accelerate an image processing application, how to identify which Intel® SSE instruction set your computing system has available, how to take advantage of it using compiler directives for optimal SIMD code generation, and how to employ Intel® Integrated Performance Primitives (Intel® IPP) to help fully exploit SIMD acceleration on the Intel® x86 architecture. The article examines optimization with Intel® SSE instructions using both the Intel® C++ Compiler and the GNU compiler collection (gcc) running on Fedora Core Linux*. Methods to verify speed-up, code generation, and how to employ Intel® IPP functions in applications are reviewed. Finally, the article looks at how SIMD acceleration architectures are evolving with Larrabee general-purpose graphics processing units (GPGPUs) and how SIMD technology-both integrated into general-purpose computing (GPC) cores and general-purpose graphics processing units (GPUs) like Larrabee-are enabling the implementation of many new algorithms with software that previously required exotic custom Application-Specific Integrated Circuit (ASIC) or Field Programmable Gate Array (FPGA) designs. The continued advancement of SIMD architecture with Intel® SSE 4.x and Larrabee provide exciting opportunities for system design and applications that are much more flexible, lower cost, and more software-driven.

Algorithms That Can Benefit from Intel® SSE

Algorithms that can benefit from Intel® SSE include those that employ logical or mathematical operations on data sets larger than a single 32-bit or 64-bit word. The Intel® SSE uses vector instructions, or SIMD architecture, to complete operations like bitwise XOR, integer or floating-point multiply-and-accumulate and scaling in a single clock cycle for multiple 32-bit or 64-bit words. Speed-up comes from the parallel operation of operations and the size of the vector (multi-word data) to which each mathematical or logical operator is applied. Examples of algorithms that significantly benefit from SIMD vector instructions include:

To better understand Intel® SSE instructions, you can look at a simple edge-enhancing image processing algorithm that uses multiply-and-accumulate operations on every pixel in a single image. The algorithm applies scaling to neighboring pixels and the current pixel in order to emphasize boundaries where pixel intensity changes occur. The next section examines how this works and how much Intel® SSE can speed up the process.


Image Processing
Images can be enhanced with sharper edges using an image processing algorithm that employs a Point Spread Function (PSF) on each pixel and a Red, Green, Blue (RGB) color band in an uncompressed Portable Pixel Map (PPM) image, as shown in Figures 1 and 2. Figure 1 shows the original image (a digital photo of a northern California sunset I took on vacation); Figure 2 shows the edge-enhanced version of the same PPM. 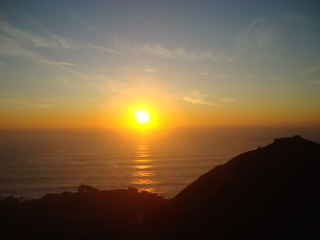 The original photo was a Joint Photographic Expert's Group (JPEG) image taken with a Sony* digital camera. I scaled the image down to 320×240 pixels and converted it into uncompressed PPM format with 24-bit RGB pixel encoding using IrfanView* for Windows. 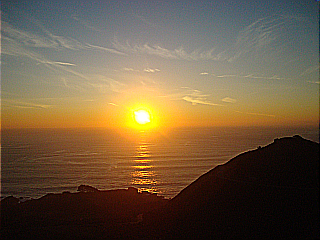 The edge-enhanced PPM in the same resolution in Figure 2 was created by running the PSF over all interior pixels (excluding top and bottom rows and left and right pixel columns) using the following "sharpen.c" C code block (see downloads for the full source):

The code simply scales each pixel R, G, and B value by the PSF, which has nine elements, with a central value that amplifies the value of the current pixel using PSF[4] and de-emphasizes the pixel according to the value of the nearest neighbor pixels in the same color band using PSF[0,1,2,3,5,6,7,8]. The resulting R, G, or B pixel value is then range limited to 0.0-255.0 and type converted back to an 8-bit unsigned integer. The theory behind how this serves to enhance edges as well as how PSF can be used for a wider variety of image enhancements can be found in Steven W. Smith's book, The Scientist and Engineer's Guide to Digital Signal Processing [http://www.dspguide.com]. The key concept is that PSF convolution of images requires a large number of multiply and accumulate operations in floating point driven by the resolution of the image and pixel encoding (76,800 3-byte pixels in this example).

Edge enhancement is often used as a first image processing step in computer vision prior to segmenting scenes, finding target-of-interest centers, and using this information for higher-level navigation or remote sensing operations. Most often, this data will be acquired at high frame rates-for example, 29.97 frames per second for National Television Standards Committee (NTSC) video. So, the processing of each frame must be done in less than 33.37 milliseconds overall-a deadline that becomes critical in this example.

No optimization was used, and the SSSE3 instructions available on my Intel® Core™ 2 Duo laptop were not employed in the code generation. This resulted in a run time on Fedora Core 9 Linux* 2.6.25 as follows:

The time of 14 milliseconds on my dual-core 1.7-GhZ Intel® Core™ 2 Duo is dangerously close to the deadline of 33 milliseconds per frame and leaves little time for any additional image processing to segment the scene or find targets of interest. Knowing that the Intel® Core™ 2 Duo processor has the SSSE3 instruction set extension and quickly referencing x86 gcc compiler directives, the code was re-compiled with level-3 (-O3) optimization and directed to use SSSE3 architecture-specific code generation (-mssse3), which is critical on 32 bit architectures for optimal double precision word alignment for cache and memory interfaces:

You can see that the processing time was significantly reduced to almost a third of the original time. Being curious how much of the acceleration came from SSSE3 instructions compared to general compiler code optimization, I re-compiled again without the SSSE3 directive:

So, you can see that the SSSE3 instructions used for multiply and accumulate specifically provide a 28.6% speed-up compared to the un-accelerated time of 7 milliseconds.

Without tools like Intel® IPP and the Intel® C++ Compiler, I was forced to write some assembly code to sample the Intel® Pentium® time stamp counter (TSC) in order to accurately time execution of this PSF code block. The assembly for this can be found in the shapen.c full source. Clearly, SSSE3 accelerates image processing, so I became curious about how I could use the Intel tools on Linux to better understand my system and to simplify more significant image processing code development. Luckily, Intel provides its tools for Linux* for academic purposes free of charge from its Non-Commercial Software Download site.

Downloading the tools from the Non-Commercial Software Download site, I found that I could easily install the Intel® C/C++ Compiler, the Intel® IPP library, and the Intel® Math Kernel Library (Intel® MKL) all in one download for IA32 or IA64 architectures. Installation on my Fedora Core 9 Linux* 2.6.25 laptop was as simple as extracting the archive and running the install.sh script. The Intel® C++ Compiler Professional Edition installation, in fact, installed the compiler, Intel® IPP, and Intel® MKL. To verify the Intel® IPP installation, I ran the built-in test programs and compiled the examples.

Compiling on Linux Using the Intel® C++ Compiler
Using Intel® IPP, I modified the example code, sharpen.c, to use Intel® IPP core library functions to positively identify the host processor-Intel® Core™2 Duo, in my case-and to provide the TSC timing and core cycle rate instead of the custom assembly I had to write before. So, Intel® IPP not only provides core functions for DSP, image processing, vector/matrix math, and cryptography functions but also provides convenient host processor utilities to work with the wide variety of Intel® SSE instruction set extensions found on the x86 architecture.

Taking this updated code and recompiling it using the Intel® C++ Compiler, I found similar results to the gcc when I first built the code without the directive to employ SSSE3 in code generation:

Linking in the Intel® IPP Libraries
Linking in Intel® IPP using the Intel® C Compiler is simple. On my Intel® Core™2 Duo laptop, both GCC and the Intel C++ Compiler generated equally fast and efficient code using the SSSE3 instructions. To test this yourself, start by using the core library with any code you have to identify your hardware capabilities and to start making use of the TSC timing utilities. The example code used in this article can be downloaded from my website [http://ecee.colorado.edu/~siewerts/sse/]. A few simple make file directives and C flags added to a standard make file are all that you need to link in the static core library and employ Intel® SSE:

The Intel® instruction set extensions for DSP, image processing, and vector math were introduced with the MMX™ extensions to the original Intel® Pentium® ISA. Since this time, Intel® SSE was introduced and continued innovation in SIMD hardware acceleration instructions with Intel® SSE2, SSE3, SSSE3, and finally SSE4.2 with the Intel® Core™ i7 architecture. In all cases, the SIMD processing was provided as an extension to the x86 GPC processor architecture, making it convenient to accelerate existing code bases with simple re-compilation and to improve or design code by linking in Intel® IPP functions for commonly used DSP, image processing, vector math, and encryption functions in applications.

Intel provided additional graphics performance and flexibility with Larrabee, a many-core offload architecture for visual computing that can be integrated with x86 GPC architectures or stand on its own. The Larrabee architecture was first unveiled by Intel in detail at SIGGRAPH 2008 (see the paper, "Larrabee: A Many-Core x86 Architecture for Visual Computing". The details of Larrabee go beyond the scope of this paper, but the SIGGRAPH paper provides an excellent overview of how Intel intends to provide GP-GPU SIMD in addition to Intel® SSE.

Both built-in SIMD instruction set extensions to GPC and GPGPU offload SIMD are critical to next-generation applications. The built-in SIMD instructions provide acceleration to all existing GPC applications with simple re-compilation. Likewise, with a bit more effort, existing applications can be re-worked to link in Intel® IPP functions to go beyond simple instruction set-level acceleration. New applications can start out using Intel® IPP and leverage the rich code base of DSP, image processing, and vector math functions from the start. For many applications, the built-in acceleration is optimal, because it does not require I/O to employ the SIMD acceleration but rather in-memory processing and is simple to integrate. Looking forward, in-data-path processing employing Larrabee as an extension to general-purpose x86 CPU's greatly enhances the x86 architecture and application performance.

Dr. Sam Siewert is the chief technology officer (CTO) of Atrato, Inc. and has worked as a systems and software architect in the aerospace, telecommunications, digital cable, and storage industries. He also teaches as an Adjunct Professor at the University of Colorado at Boulder in the Embedded Systems Certification Program, which he co-founded in 2000. His research interests include high-performance computing and storage systems, digital media, and embedded real-time systems.