Ceph* is the most popular block and object storage backend. It is an open source distributed storage software solution whose outstanding abilities and features have drawn the attention of e-commerce companies who need relational database storage for workloads such as online transactional processing (OLTP) and other transaction-oriented applications. These database workloads, which require a high-performance storage solution with high concurrency, high availability, and extremely low latency, have posed new challenges for distributed storage systems, including Ceph.

Previous work by Reddy Chagam, Tushar Gohad, Orlando Moreno, and Dan Ferber6 has demonstrated that an Intel NVMe* SSD-based Ceph cluster can be a compelling storage solution for database OLTP workloads. This white paper describes how to leverage Intel® Optane™ technology and the new Ceph backend—BlueStore—to build an All-Flash Array (AFA) reference architecture (RA) for OLTP workloads. We discuss the motivations for running OLTP workloads on Ceph and how to achieve this using Intel Optane technology with BlueStore. We also introduce several typical RAs running OLTP workloads on Ceph. One of the most popular deployments was chosen to showcase the performance of the OLTP on an AFA Ceph RA based on Intel Optane technology.

Why Ceph* for OLTP?

Several motivations are driving the adoption of Ceph for OLTP database storage. E-commerce service providers face the need to deliver high performance and low latency storage systems, increasingly at cluster scale. Some enterprises have chosen to endure the high operating and maintenance costs of their traditional storage solutions rather than use easy-scaling distributed storage solutions, but many others are exploring Ceph’s potential for their database storage systems.

OLTP is a popular data processing system used in today's enterprises, with workloads based on database queries. The typical usage scenario is a large number of users accessing the database at the same time and requiring milliseconds of response time to return or update records. The most important characteristics of OLTP workloads are high concurrency, large data volumes, and fast response time. Ceph’s promising performance of multiple I/O access to multiple RADOS block device (RBD) volumes addresses the need for high concurrency, while the outstanding latency performance of Intel® Solid State Drives and Ceph’s appropriately designed architecture can help deliver fast response times. Because Ceph is a good choice for a highly scalable storage solution, providing large volumes for a big database is no longer an issue in production.

BlueStore is a new storage backend for Ceph. While the existing FileStore backend stores objects as files in an XFS file system, BlueStore stores data on the raw block device, which avoids double-writes due to use of a file system. The metadata is managed by RocksDB, a persistent key/value database. RocksDB can store files on BlueFS, which implements file-system-like interfaces that support its journal. Data can be stored on the same block device as is stored on BlueStore.1

BlueStore requires three devices or partitions: data, DB, and (write-ahead log) WAL. Generally, we can store the DB and WAL on a fast solid-state drive (SSD) device, since the internal journaling usually journals small writes. In this case, we could make better use of the fast device and boost Ceph performance with an acceptable cost.

3D NAND technology improves regular two-dimensional storage by stacking storage cells to increase capacity through higher density and lower cost per gigabyte, and it offers the reliability, speed, and performance expected of solid-state memory.3 This technology offers a cost-effective replacement for traditional hard-disk drives, helping customers enhance user experience, improve the performance of apps and services across segments, and reduce IT costs.

When building an OLTP on Ceph RA, there are two aspects to consider. The first aspect is the architecture of the OLTP runtime environment for the front-end solution. The second is the hardware setup of Ceph as the backend storage solution.

We first introduce the OLTP deployment on the client side.

When deploying OLTP workloads on Ceph, consider the following:

OLTP workloads can run directly on physical machines (bare-metal), in containers, or on virtual machines (VMs).

On bare-metal, we map RBD volumes through the kernel module rbd.ko and access them using the device node /dev/rbd. Bare metal can provide remarkable performance, because applications can access the hardware directly and resources can be fully used.

A Docker container is a lightweight virtual technology, where containers share the same OS but run applications separately. In this case, we can achieve RBD access by mapping the RBD volumes through rbd.ko and making each container bind with a unique RBD device node.

For virtualization environments such as Docker or the QEMU hypervisor, server hardware resources may not be fully used during testing, and VMs cannot access physical hardware directly. Thus, bare metal generally performs better than VMs, since the multiple emulation layers slow down the running of applications, and the emulation process itself consumes extra resources. On the other hand, the use of VMs provides easier software management and better portability, which provides great scalability that bare metal cannot provide. Furthermore, bare metal doesn’t provide an application isolation mechanism, which may cause instability issues when upgrading or rolling back the system software. KVM VMs with QEMU virtio act as a full VM solution compared to half-virtualized Docker containers. Docker containers share the same kernel but isolate user space, so there’s no overhead of running guest kernels when using containers.

On the storage server side, Intel has proposed an RA for a Ceph-based AFA.

This white paper focuses on the Docker + krbd configuration as the OLTP deployment on the client side. This section presents a performance evaluation of the Ceph AFA cluster based on Ceph BlueStore.

On each client node, four pairs of containers were created for both SysBench and the MySQL* database. The SysBench container was linked from the MySQL container and could directly access the database by running the Sysbench OLTP test case. Each container was assigned to a limited number of CPUs and had limited memory.

To simulate a typical usage scenario, three OLTP test patterns were selected using the Sysbench tool.5 The test patterns consisted of OLTP 100-percent read, 100-percent write, and an OLTP default mix read/write. For each pattern, the throughput (QPS or latency) was measured. The volume size was 150 GB. To get stable performance, the volumes were pre-allocated to bypass the performance impact of thin-provisioning. The OSD page cache was dropped before each run to eliminate page cache impact.

The value of MySQL innodb_buffer_pool_size was set to 21 GB, and the innodb_log_file_size to 4 GB. The total memory consisted of a full MySQL innodb buffer pool and two log binary files. The total memory size allocated was about 31 GB, which was an appropriate value compared to the 32 GB memory we preconfigured for the MySQL container. The size of the database initialized was four times the size of innodb_buffer_pool_size, which made the innodb buffers 25 percent of the data.

For each test case, Sysbench OLTP was configured with a 300-second warm-up phase and 300-second data collection phase. Sysbench test parameter details are included in the software configuration section of this article.

Ceph demonstrated excellent thread scale-out ability on OLTP read performance on the AFA RA. The QPS doubled as the number of threads doubled, and latency stayed below 5 ms until the thread number exceeded the container CPU number. As for OLTP write, QPS stopped scale out beyond eight threads; after that, latency increased dramatically. This behavior shows that OLTP write performance was still limited by Ceph 16K random write performance. OLTP mixed read/write behaved within expectation as its QPS also scaled out as the thread number doubled. 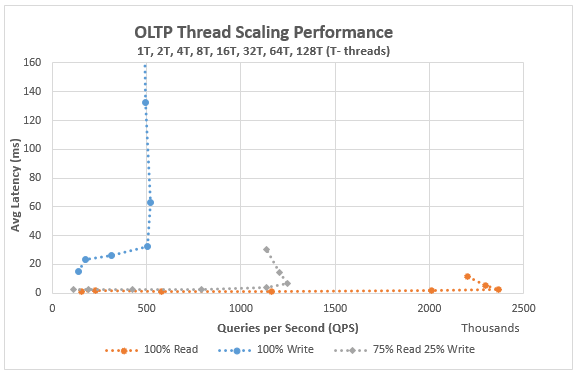 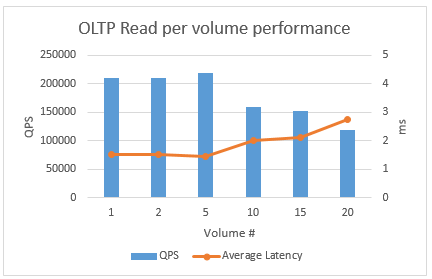 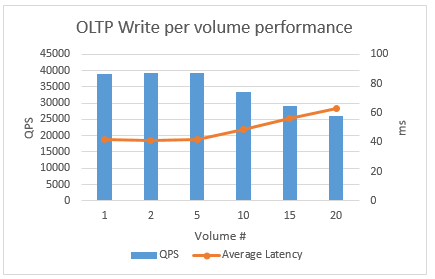 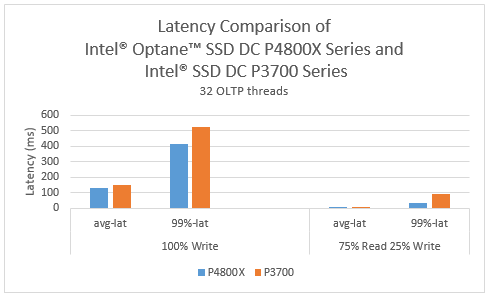 In this white paper, we first stated our motivations for deploying OLTP on Ceph. Then we introduced Intel Optane technology based OLTP on Ceph RA. Finally, we demonstrated excellent OLTP performance with several sets of the Sysbench test results and concluded that Ceph is a great cloud storage solution for OLTP systems.

To summarize, the combination of Intel Optane technology and Intel® 3D NAND SSDs provides the following benefits on Ceph:

As a next step, we could leverage the client-side cache to further boost OLTP performance. To do this, we would add an extra SSD for use as a caching device between the client and storage. This feature brings a significant performance impact to the current Ceph architecture. Table 6 shows the 4K random write performance of a single node using Intel SSD DC P3700 and an Intel Optane SSD for caching, compared with Ceph Baseline, using 10 RBD volumes. As we can see, if we introduce the client-side cache feature to OLTP on the Ceph solution, we can expect greater improvement of OLTP performances.

In the future, Ceph all-flash configurations will transition from the configurations described in this article to Intel® Optane™ + 3D NAND TLC SSD-based configurations, where better OLTP performances are to be expected. The transition trend diagram is shown in Figure 7. 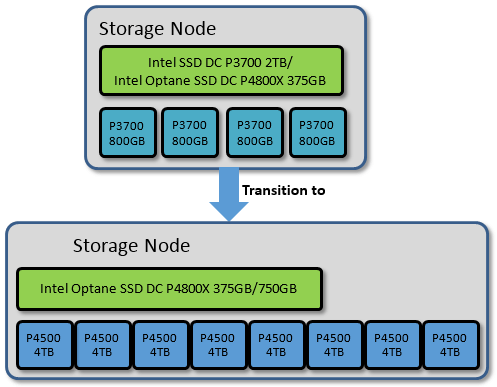 Ning Li is a software engineer of the Cloud Storage Engineering team from Intel Asia-Pacific Research & Development Ltd. He is currently focusing on Ceph benchmarking and performance tuning based on Intel platforms and reference architectures. Ning has worked for Intel for six years and has software development and performance optimization experience in open sources technologies including Ceph, Linux kernel, and Android.

Jian Zhang is an engineering manager at Intel. He manages the cloud storage engineering team in Intel Asia-Pacific Research & Development Ltd. The team’s focus is primarily on open source cloud storage performance analysis and optimization, and building reference solutions for customers based on OpenStack Swift and Ceph. Jian Zhang is an expert on performance analysis and optimization for many open source projects, including Xen, KVM, Swift and Ceph, and benchmarking workloads like SPEC*. He has worked on performance tuning and optimization for seven years and has authored many publications related to virtualization and cloud storage.

Special thanks to Tushar Gohad for helping to review the test cases and test results.