One question about Intel® Software Guard Extensions (Intel® SGX) that comes up frequently is how to mix enclaves with managed code on Microsoft Windows* platforms, particularly with the C# language. While enclaves themselves must be 100 percent native code and the enclave bridge functions must be 100 percent native code with C (and not C++) linkages, it is possible, indirectly, to make an ECALL into an enclave from .NET and to make an OCALL from an enclave into a .NET object. There are multiple solutions for accomplishing these tasks, and this article and its accompanying code sample demonstrate one approach.

P/Invoke is good for calling simple C functions in a DLL, which makes it a reasonable choice for interfacing with enclaves, but writing P/Invoke wrappers and marshaling data can be difficult and error-prone. COM is more flexible than P/Invoke, but it is also more complicated; that additional complexity is unnecessary for interfacing with the C bridge functions required by enclaves. This code sample uses the C++/CLI approach.

C++/CLI offers significant convenience by allowing the developer to mix managed and unmanaged code in the same module, creating a mixed-mode assembly which can in turn be linked to modules comprised entirely of either managed or native code. Data marshaling in C++/CLI is also fairly easy: for simple data types it is done automatically through direct assignment, and helper methods are provided for more complex types such as arrays and strings. Data marshaling is, in fact, so painless in C++/CLI that developers often refer to the programming model as IJW (an acronym for “it just works”).

The trade-off for this convenience is that there can be a small performance penalty due to the extra layer of functions, and it does require that you produce an additional DLL when interfacing with Intel SGX enclaves. 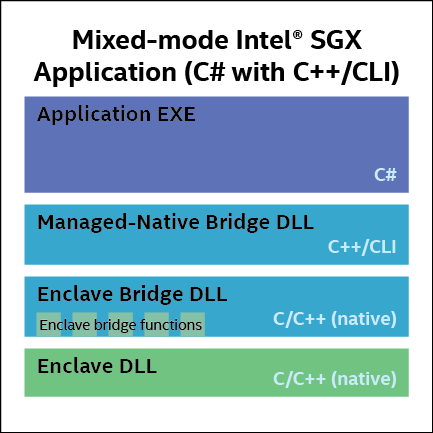 Figure 1 illustrates the component makeup of a C# application when using the C++/CLI model. The managed application consists of, at minimum, a C# executable, a C++/CLI DLL, the native enclave bridge DLL, and the enclave DLL itself.

The sample application provides two functions that execute inside of an enclave: one calls CPUID, and the other generates random data in 1KB blocks and XORs them together to produce a final 1KB block of random bytes. This is a multithreaded application, and you can run all three tasks simultaneously. The user interface is shown in Figure 2.

To build the application you will need the Intel SGX SDK. This sample was created using the 1.6 Intel SGX SDK and built with Microsoft Visual Studio 2013. It targets the .NET framework 4.5.1.

On the CPUID panel, you enter a value for EAX to pass to the CPUID instruction. When you click query, the program executes an ECALL on the current thread and runs the sgx_cpuid() function inside the enclave. Note that sgx_cpuid() does, in turn, make an OCALL to execute the CPUID instruction, since CPUID is not a legal instruction inside an enclave. This OCALL is automatically generated for you by the edgr8tr tool when you build your enclave. See the Intel SGX SDK Developer Guide for more information on the sgx_cpuid() function.

On the RDRAND panel you can generate up to two simultaneous background threads. Each thread performs the same task: it makes an ECALL to enter the enclave and generates the target amount of random data using the sgx_read_rand() function in 1 KB blocks. Each 1 KB block is XORd with the previous block to produce a final 1 KB block of random data that is returned to the application (the first block is XORd with a block of 0s).

For every 1 MB of random data that is generated, the function also executes an OCALL to send the progress back up to the main application via a callback. The callback function then runs a thread in the UI context to update the progress bar.

Because this function runs asynchronously, you can have both threads in the UI active at once and even switch to the CPUID tab to execute that ECALL while the RDRAND ECALLs are still active.

The application is made up of the following components, three of which we’ll examine in detail:

There is also a fifth component, sgx_support_detect.dll, which is responsible for the runtime check of Intel SGX capability. It ensures that the application exits gracefully when run on a system that does not support Intel SGX. We won’t be discussing this component here, but for more information on how it works and why it’s necessary, see the article Properly Detecting Intel® Software Guard Extensions in Your Applications.

The general application flow is that the enclave is not created immediately when the application launches. It initializes some global variables for referencing the enclave and creates a mutex. When a UI event occurs, the first thread that needs to run an enclave function checks to see if the enclave has already been created, and if not, it launches the enclave. All subsequent threads and events reuse that same enclave. In order to keep the sample application architecture relatively simple, the enclave is not destroyed until the program exits.

The main executable is written in C#. It requires a reference to the EnclaveLink DLL in order to execute the C/C++ methods that eventually call into the enclave.

These two functions are simple wrappers around functions in EnclaveLinkNative and are discussed in more detail below.

When either the CPUID or RDRAND functions are executed via the GUI, the application creates an instance of class EnclaveLinkManaged and executes the appropriate method. The CPUID execution flow is shown, below:

The callbacks for the progress bar in the RDRAND execution flow are implemented using a delegate, which creates a task in the UI context to update the display. The callback methodology is described in more detail later.

The primary purpose of the EnclaveLink DLL is to marshal data between .NET and unmanaged code. It is a mixed-mode assembly that contains two objects:

As the name suggests, this DLL holds the enclave bridge functions. This is a 100 percent native assembly with C linkages, and the methods from EnclaveLinkNative call into these functions. Essentially, they marshal data and wrap the calls in the mixed mode assembly to and from the enclave.

The OCALL and the Callback Sequence

The most complicated piece of the sample application is the callback sequence used by the RDRAND operation. The OCALL must propagate from the enclave all the way up the application to the C# layer. The task is to pass a reference to a managed class instance method (a delegate) down to the enclave so that it can be invoked via the OCALL. The challenge is to do that within the following restrictions:

When each ProgressRandom object is instantiated, a delegate is assigned in the variable callback, pointing to the UpdateProgress instance method:

This variable is passed as an argument to the EnclaveLinkManaged object when the RDRAND operation is requested:

The genrand() method inside of EnclaveLinkManaged saves this delegate to the property “callback”. It also creates a GCHandle that both points to itself and pins itself in memory, preventing the garbage collector from moving it in memory and thus making it accessible from unmanaged memory. This handle is passed as a pointer to the native object.

This is necessary because we cannot directly store a handle to a managed object as a member of an unmanaged class.

In the native object, we now have a pointer to the managed object, which we save in the member variable managed.

Why do we need this layer of indirection? Because the next layer down, EnclaveBridge.dll, cannot have a linkage dependency on EnclaveLink.dll as this would create a circular reference (where A depends on B, and B depends on A). EnclaveBridge.dll needs an anonymous means of pointing to our instantiated class method.

Inside en_genrad() in EnclaveBridge.cpp, this std::function is converted to a void pointer. Enclaves only support a subset of data types, and they don’t support any of the C++11 extensions regardless. We need to convert the std::function pointer to something the enclave will accept. In this case, that means passing the pointer address in a generic data buffet. Why use void instead of an integer type? Because the size of a std::function pointer varies by architecture.

Note that we not only must allocate this data buffer, but also tell the edgr8r tool how large the buffer is. That means we need to pass the size of the buffer in as an argument, even though it is never explicitly used.

Inside the enclave, the callback parameter literally just gets passed through and out the OCALL. The definition in the EDL file looks like this:

The callback starts unwinding in the OCALL, o_genrand_progress:

The callback parameter, cbref, is recast as a std::function binding and then executed with our two arguments: progress and target. This points back to the genrand_progress() method inside of the EnclaveLinkNative object, where the GCHandle is recast to a managed object reference and then executed.

The next stop is the managed object. Here, the delegate that was saved in the callback class member is used to call up to the C# method.

This executes the UpdateProgress() method, which updates the UI. This delegate returns an int value of either 0 or 1, which represents the status of the cancellation button:

A return value of 0 means the user has asked to cancel the operation. This return code propagates back down the application layers into the enclave. The enclave code looks at the return value of the OCALL to determine whether or not to cancel:

The default configuration for an enclave is to allow a single thread. As the sample application can run up to three threads in the enclave at one time—the CPUID function on the UI thread and the two RDRAND operations in background threads—the enclave configuration needed to be changed. This is done by setting the TCSNum parameter to 3 in Enclave.config.xml. If this parameter is left at its default of 1 only one thread can enter the enclave at a time, and simultaneous ECALLs will fail with the error code SGX_ERROR_OUT_OF_TCS.

Mixing Intel SGX with managed code is not difficult, but it can involve a number of intermediate steps. The sample C# application presented in this article represents one of the more complicated cases: multiple DLLs, multiple threads originating from .NET, locking in native space, OCALLS, and UI updates based on enclave operations. It is intended to demonstrate the flexibility that application developers really have when working with Intel SGX, in spite of their restrictions.