Discontinuity in big data infrastructure drives storage disaggregation, especially in companies experiencing dramatic data growth after pivoting to AI and analytics. This data growth challenge makes disaggregating storage from compute attractive because the company can scale their storage capacity to match their data growth, independent of compute. This decoupled mode allows the separation of compute and storage, enabling users to rightsize hardware for each layer. Users can buy high-end CPU and memory configurations for the compute nodes, and storage nodes can be optimized for capacity.

Many traditional companies who were formerly big users of Oracle* Real Application Clusters (RAC) or Oracle Exadata* are now looking for solutions to move off these platforms to something more cloud-like, open source, and that can be readily integrated into their AI analytics investments. By decoupling compute and storage, multiple compute clusters running Apache Hadoop*, Apache Spark*, Apache Kafka*, MongoDB*, Apache Cassandra*, or data science tools like TensorFlow* can share access to a common data repository or data lake. This leads to cost savings in storage capacity. Enterprise-grade shared storage with consistent performance and a rich set of data services can be used for simplified data management and reduced provisioning overheads. This can also help simplify and improve security by using shared storage data-at-rest encryption capabilities.

According to IDC, through 2020, spending on cloud-based big data analytics technology will grow 4.5 times faster than spending for on-premises solutions1. Similarly, Gartner has noted, "Cloud-based big data services offer impressive capabilities like rapid provisioning, massive scalability, and simplified management." And in the report "Move Your Big Data into The Public Cloud" 2 sponsored by Oracle and Intel, Forrester Research wrote, "companies that move more into the cloud for big data analytics achieve greater innovation, increased integration, and higher levels of security," and “Public cloud adoption is the top priority for technology decision makers investing in big data.”

This whitepaper is a continuation of Unlock Big Data Analytics Efficiency with Compute and Storage Disaggregation on Intel® Platforms3.

This evaluation uncovered two significant performance gaps: first, cloud storage does not natively act like a file system and lacks critical features such as transactional rename support, and second, cloud storage takes less advantage of system memory as buffers or page caches. We identified optimizations that can be made to overcome these performance gaps. We describe the analysis and two optimizations in the next section. 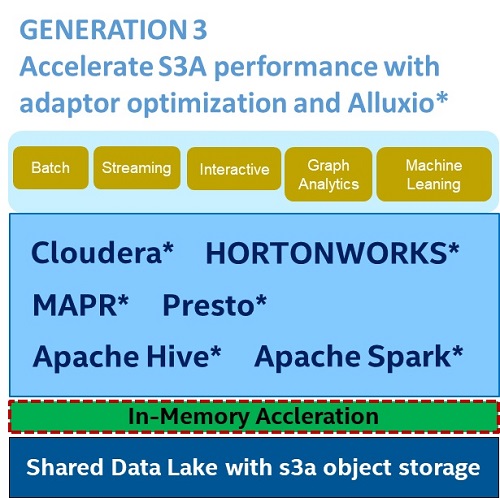 The solution is to add an in-memory acceleration layer to eliminate the two main issues that cause performance degradation. The first issue is that disaggregated cloud storage lacks filesystem semantics like rename; the other issues is that disaggregated cloud storage can’t leverage memory for use as buffers and page caches. Adding an In-memory acceleration layer solves both issues, so we can both maximize the benefit realized by cloud storage and achieve competitive or even better performance than traditional on-premise configuration.

The test cluster consists of ten nodes, including five compute nodes and five storage nodes. All of the nodes are equipped with Intel® Xeon® processor E5-2699 version 4.

For the storage node, we ran both the Hadoop Distributed File System (HDFS*)5 and Ceph*6 on seven 1TB HDDs on each node. The total storage pool size is 5 * 7 / 3(replica) = 11.6T. For Ceph, we deployed Ceph* radosgw on each node to fully use network bandwidth. In comparison with HDFS*, Ceph* OSD requires Ceph* radosgw to communicate with Spark* executors as the I/O path will be longer than by using HDFS*. When using S3A Ceph* as a backend, the read I/O path should be from Ceph* OSD to Ceph* Radosgw to Spark*, which is much longer than when using HDFS*, where the read I/O path is from the HDFS* Datanode directly to Spark* executors. 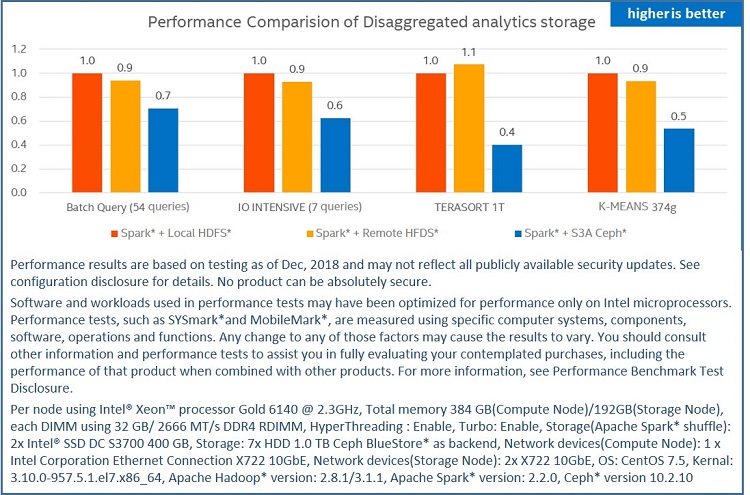 After further investigating system data, we noticed that there are two main reasons leading to the negative performance impact seen with disaggregated S3A Ceph cloud storage. One major cause is that when using S3A Ceph cloud storage in the Hadoop* system, we relied on an S3A adapter. S3A is not a filesystem and does not natively support transactional writes (TW). Most big data analytics software (such as Apache Spark or Apache Hive) rely on the HDFS’s atomic rename feature to support atomic writes and during job submit, tasks submit output to temporary locations first, only moving (renaming) data to the final location upon job completion. Since S3A lacks native support for moving and renaming, it implements this with: copy + delete + head + post, a combination of operations which adds additional read and write bandwidth to cloud storage. Figure 5 demonstrates this behavior. S3A Ceph cloud storage network bandwidth is shown on the left side, and disaggregated HDFS network bandwidth is shown on the right side. The read bandwidth line shown on the left side is caused by S3A using read and write to implement moving. 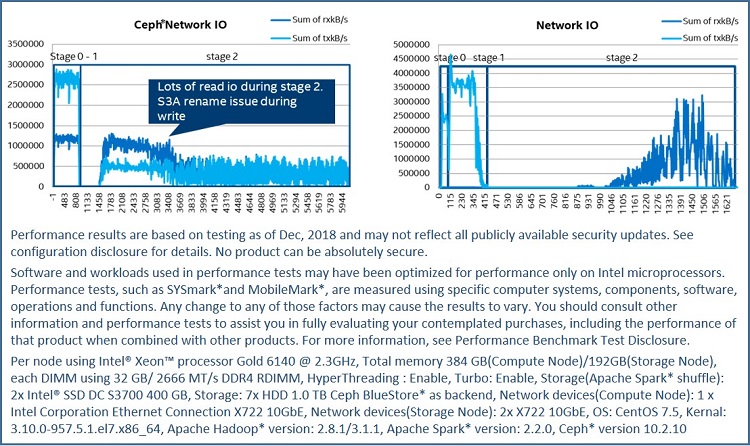 Another cause is that disaggregated S3A Ceph cloud storage can’t use memory as buffers and page cache as HDFS did since cloud storage lacks a good data-locality concept compared to HDFS, and has a different implementation for data consistency. I/O in cloud storage will Ack until all replications hit disks while in HDFS case, I/O may Ack a completion when replications hit data node buffers. As shown in Figure 6, on Ceph, memory utilization is about 25% while the memory is almost used up in HDFS case. 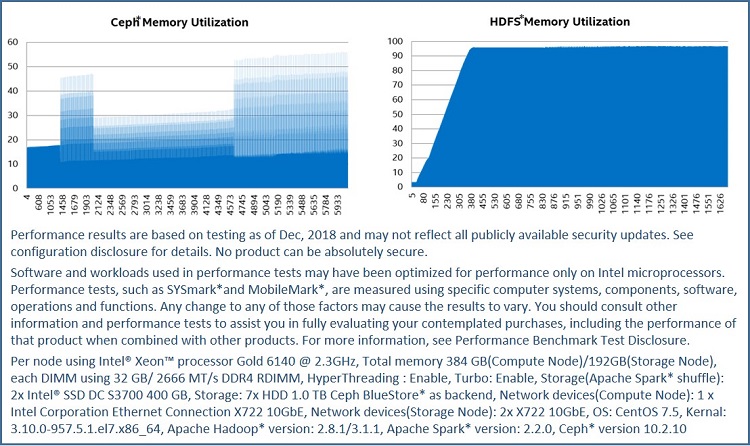 Figure 6. Storage side memory comparison between S3A Ceph and HDFS

Since the implementation of an S3A job commit mechanism greatly impacts cloud storage performance, a new feature called S3A Committer8 has been part of Hadoop since version 3.1.1. S3A Committer makes explicit use of this multipart upload (“MPU”) mechanism and provides two optimized protocols to make data output much faster. In Table 3, we list these two committers, staging and magic, with their operations in different phases.

In our test of the staging committer, temporary output data is written to local disk first when tasks commit, with the result that data will be written to cloud storage only once. 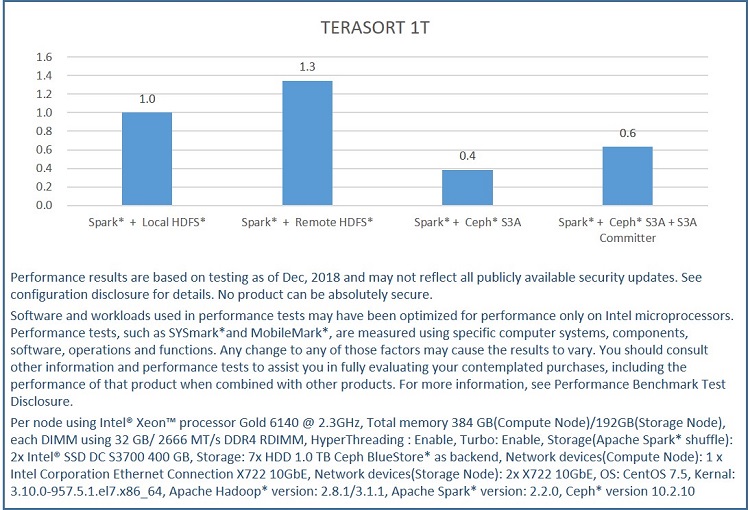 Performance improved by 1.5 times after using an S3A committer (staging committer), and in Figure 8, you can see the read I/O in the output stage is gone. 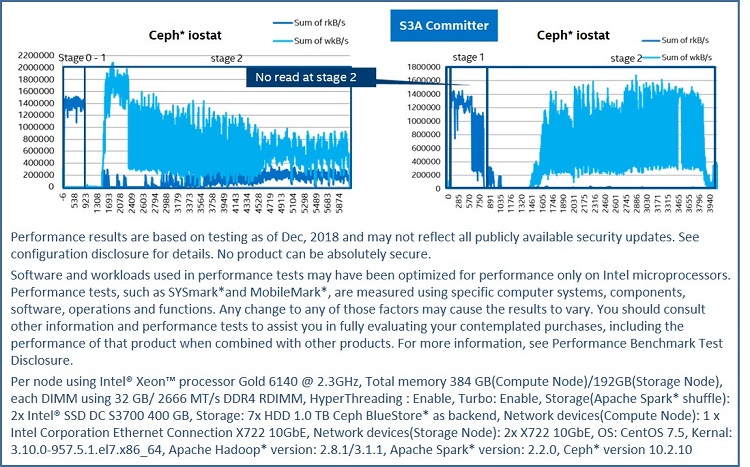 Figure 8. I/O state comparison with and without an S3A committer

There is still 40% performance degradation with S3A Committer compared with that of co-located HDFS. 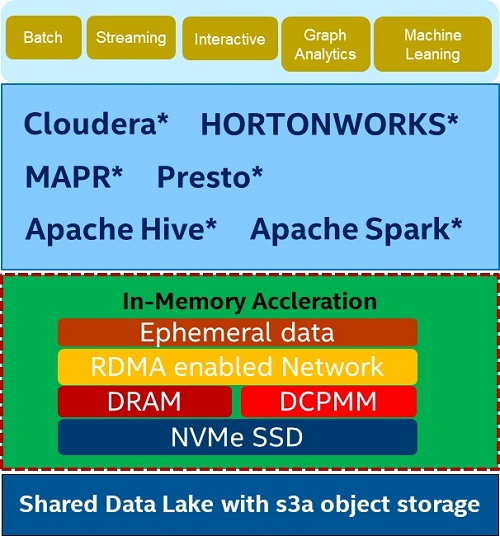 In the above chapters, we evaluated storage disaggregation and S3A adapter optimization and noticed two issues causing performance gaps between disaggregated cloud storage and a traditional on-premise configuration. To further optimize Spark on disaggregated cloud storage and to benefit from rapid provisioning, excellent scalability, easy management, and pay as you grow flexibility, we added an “In-Memory Data Acceleration” layer to support big data filesystem operation natively and better utilize memory to improve the performance.

Figure 10. Accelerating with Alluxio* as cache

To eliminate the existence overhead of S3A, we proposed adding a memory layer between the storage systems and the computation frameworks and applications to accelerate Spark* process speed. As shown in Figure 10, when using Alluxio*9 as a cache layer, data is promoted from Ceph* to a Spark* executor local Alluxio* worker and then used by Spark. And when a Spark executor outputs data back to Ceph, it outputs data to Alluxio first then flushes to Ceph asynchronously.

In this test, we evaluated the performance of using Alluxio as cache on S3A Ceph cloud storage, since we still saw a 40% performance degradation when running Terasort on there compared with a traditional on-premise configuration with S3A connector optimization.

We used Alluxio 2.0.0 in this test, deploying Alluxio workers to all Spark running nodes, with the assumption that since we are using Spark in Yarn, and Spark executors may switch to different physical nodes every time, the benefit we may observe from Alluxio is better promoting and flushing I/O behavior. 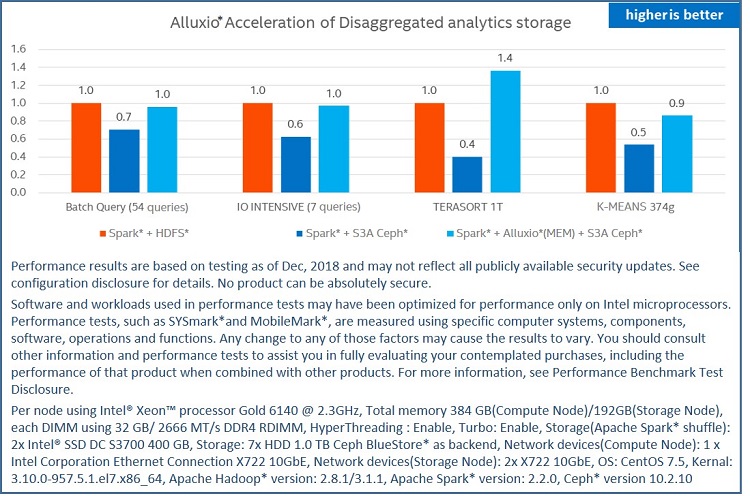 We tested deploying Alluxio with five 200 GB Memory. All Alluxio tests are based on the disaggregated S3A Ceph cloud storage configuration, enabling us to see the exact performance improvement after adding the in-memory data acceleration.

The results showed that ;both configurations provide a significant performance improvement.

So, from the above data, we can conclude that using Alluxio as the cache can eliminate the performance overhead of S3A and there is still a benefit when deploying big data on cloud storage. When the workload is I/O intensive, it is even more beneficial to adopt Alluxio as the cache.

We have shown that using an in-memory data accelerator (IMDA) as Spark cache improved the Spark process speed significantly, and for further optimization, we propose a Spark module called Spark-PMoF, which will enable Intel® Optane™ DC persistent memory module and RDMA support in Spark shuffle and also external Spark shuffle.

The workflow for use of Spark-PMoF as an IMDA layer is shown in Figure 13. Shuffle data will be written to Intel Optane DC persistent memory using the Persistent Memory Development Kit (PMDK), and shuffle data transmission among executors leverages RDMA to bypass some memory copy and offload CPU cycles.

Initial implementation and evaluation are complete and will be covered in the next paper in this series.

Software and workloads used in performance tests may have been optimized for performance only on Intel® microprocessors. Performance tests, such as SYSmark* and MobileMark*, are measured using specific computer systems, components, software, operations and functions. Any change to any of those factors may cause the results to vary. You should consult other information and performance tests to assist you in fully evaluating your contemplated purchases, including the performance of that product when combined with other products.

§ Configurations: [describe config + what test used + who did testing].

§ For more information go to http://www.intel.com/performance.